During the 70s, ecological horrors were quite popular. Even Japan’s titanic superhero Godzilla battled a creature derived from pollution, ironically, in a film that became Frogs’ theatrical co-feature on a double bill, when released by American International Pictures. This spooky flick takes place down South and has a photographer (Sam Elliot sans mustache) finding himself on an island owned by the rich Jason Crockett (Ray Milland) and family. The Crockett’s continually pollute the area with refuse, pesticides and poisons to keep the swamp critters at bay. Well, the indigenous creatures have had enough and soon lizards, frogs, spiders, snakes, crabs and even turtles are taking out the Crocketts one by one.

Nature gets revenge flick is directed very effectively by George McCowan from a script by Robert Hutchison and Robert Blees. Despite the silly sounding story, it’s an atmospheric and creepy flick, thanks especially to some really effective wildlife cinematography by Mario Tosi, that makes the critters of the local swamp look sinister and filled with devious intent. This and a spooky score by Les Baxter, really give what could have been a laughable movie some nice chills. As Milland’s wheelchair bound matriarch is quite the insufferable tyrant, one pretty much roots for the local wildlife in taking out his obnoxious and whiny family members. Sure, it’s hard to believe lizards are smart enough to recognize bottles of poison and knock them over to asphyxiate one of their prey, but in the context of the nature gets revenge story, we go along with it. That and McCowan gives these common and mostly harmless critters some lethality in how they and the scenes are shot. If you can make a slowly approaching snapping turtle scary, you’re doing something right. There is some bloodshed and some disturbing demises, but this was the 70s and even a PG rated flick like this had some sting and bite to it. After taking itself seriously for the entire runtime, one wonders why the credits end with a cartoon frog swallowing a human hand. A jokey finish to a flick that was very effective at portraying a ludicrous story with dead seriousness.

The cast all approach things with the right degree of earnestness and that helps things along. Elliott makes a fine hero. He’s there to expose Milland’s mistreatment of the surroundings, but the film doesn’t really play them at odds, with Elliott’s Picket Smith cooperating and respecting Ray Milland’s authority while there. It’s not till things become obvious that they are in danger, that he starts to go against the patriarch and take control. Veteran actor Ray Milland gives his Jason Crockett a commanding presence and you understand why his family cowers before him. He’s tyrannical and selfish and even refuses to let a few deaths ruin his Fourth of July birthday celebration. Despite all the killer critters, he is the true villain here. Curious if Creepshow’s also wheelchair bound and cake wanting Nathan Grantham and his family were based on he and the Crocketts. Joan Van Ark is our heroine Karen, pretty much the only likable Crockett. Of course she and Pickett fall for each other. The rest of the cast are fine as various drunk, whiny Crocketts, or their long-suffering domestic help. A good cast that plays the material right enough to make it work.

The film is very slow paced, but otherwise quite spooky and atmospheric, considering it’s silly story. Director George McCowan makes this about as creepy as one can get within the framework of frogs, lizards, snakes and other swamp life forming a lethal army capable of outsmarting and taking out humans. The deaths are disturbing, the photography of the animals is really effective and the island, swamp and plantation-like house settings are all used very well. The swampy Florida locations are exploited perfectly. The cast get and perform the material with the right amount of seriousness and most of the humans are unlikable enough that you root for the amphibians and reptiles. A film that is far more successful with it’s ridiculous story than it had any right to be. 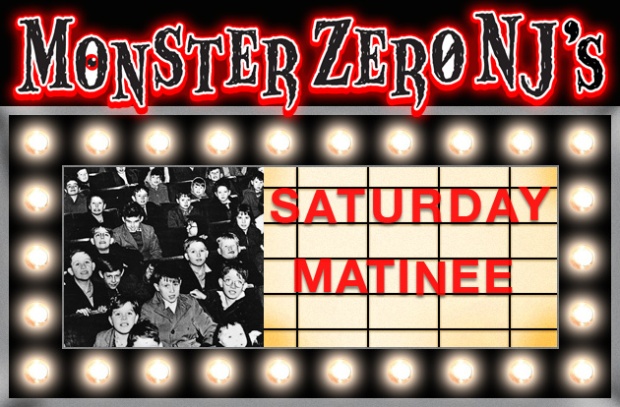 The Rankin/Bass people, along with Japan’s Tsuburaya Productions, co-produced this cheesy, fun, 70s flick about billionaire big game hunter Maston Thrust (Richard Boone), who’s oil drilling team discovers a lost world filled with dinosaurs, including a massive Tyrannosaurus Rex, in a volcano basin at the North Pole. What then ensues is 106 minutes of campy fun as Thrust and his team enter the prehistoric oasis by way of a ‘polar borer’ and encounter dinosaurs played by men in rubber suits on miniature sets and cave people played by Japanese extras, as the ego-maniacal hunter tries more and more ludicrous ways to bring down the prehistoric predator at any cost. This is one trophy that is not going up on the mantle easily…if at all.

Fun, fun fun as this entertainingly cheesy flick is co-directed with dead seriousness by Alexander Grasshoff and Shusei Kotani and acted with the same seriousness…sort of…by it’s cast. A rubber monster blast.

Available from Warner Brothers Archive Collection in a bare bones, but nice looking uncut print, as the American version was truncated from 106 minutes to 92 minutes for TV airing.

MONSTERZERO NJ EXTRA TRIVIA: Watch closely in this clip and you can see a member of the film crew in a blue shirt ducking out of the way after pushing a boulder that is supposedly being pulled by the T-Rex.