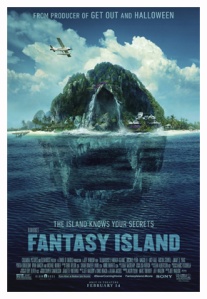 The idea of taking the popular 70s show Fantasy Island and turning it into more of a Twilight Zone/horror flick is actually a good idea. Too bad they couldn’t make a good movie out of it. As with the show, a group of people are brought to a tropical island to live out their fantasies. In this darker version, the fantasies don’t quite work out as they expect and dangerously so.

Flick is flatly directed by Jeff Wadlow from a weak script by by Chris Roach and Jillian Jacobs, that seems like it was made up as it went along. Things get more and more ludicrous as the film progresses. It takes an amusing premise and rolls it out as unimaginatively as you can think of. There is no suspense, no tension and no innovation with turning a classic TV show concept into something much darker. It’s four segments playing out at the same time and none of them very interesting. The supernatural mumbo-jumbo as to how and why this is all happening is silly, as the revelation that everyone’s fates are somehow connected is no surprise. The big end reveal as to why these particular five are all here, is laughable…though points for the audacity in giving it a somewhat upbeat ending after all that goes on. The movie is also about ten to fifteen minutes too long and by the last act you just want it to be over. Flick also wastes a good cast, including Michael Peña as Roarke, Maggie Q, Michael Rooker, Lucy Hale and Portia Doubleday. This might be one of the only times one can say the versatile Peña is miscast. That, sadly, is the film’s biggest accomplishment. Blumhouse, lately, has been churning out cookie cutter thrillers like this. They make these flicks so cheaply, that even a misguided mess like Fantasy Island makes them money…so why should they try harder? 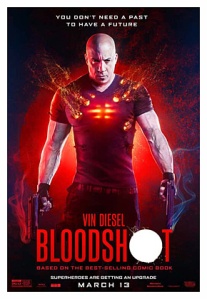 Comic book based superhero flick finds soldier Ray Garrison (Vin Diesal), murdered and his wife (Talulah Riley) killed by a vengeful terrorist (Toby Kebbell). They can rebuild him, they have the technology! Ray is brought back to life by Dr. Emil Harting (Guy Pearce) and made better, stronger, faster…you get the idea. Nanite technology almost instantly heals his wounds and his mind is now a supercomputer. Problem is, Harting is actually using Ray as an assassin, recreating the murder of Ray’s wife, over and over, with the face of each intended target, under the deception of returning memories. Suffice to say Ray isn’t going to be happy when he finds out…which he does.

Flick is directed by David S. F. Wilson from a script by Jeff Wadlow and Eric Heisserer, based on the Valiant Comic. As such, it’s a very routine and by-the-numbers superhero/action flick. The FX are good and there is plenty of action, but it’s nothing we haven’t seen before, or presented in a way that makes it fresh. Diesel is a solid enough action hero, though even he seems to be going through the numbers here. At least it does liven up a bit for it’s free-for-all climax. Also stars Eiza González, Sam Heughan and Alex Hernandez as KT, Dalton and Tibbs, three other ex-soldiers enhanced by Harting’s Rising Spirit Tech and Wilfred Wigans as a computer genius, who helps Ray find the truth and get revenge. Not terrible, but not terribly special either.