This dark comic book thriller takes place in the future where the mutants are all but gone and “The Wolverine” Logan (Hugh Jackman) keeps a low profile as a limo driver and takes care of an Alzheimer’s afflicted Professor X (Patrick Stewart), who is in hiding in Mexico. Logan, who is now aging and losing his ability to heal due to his own ailments, is contacted by a woman (Elizabeth Rodriguez) begging him to take a little girl named Laura (Dafne Keen) to a safe haven in South Dakota…a safe haven for mutants. Soon Logan finds Laura is very much like him and now he, the girl and The Professor are in a race across country for their lives as the sinister forces that created Laura want her back.

Flick is intensely directed by James Mangold from a script by he, Michael Green and Scott Frank and finally gives fans the R-rated Wolverine adventure they have been craving. The violence reaches horror film levels as does the intensity, though Mangold gives the proceedings some nice emotional depth amidst the carnage. The film is smaller and more intimate in scale, giving this tale room for some strong character development, especially as our beloved heroes are both aging and ailing and no longer who they used to be. This also allows for some nice moments between Logan and Xavier, as well as, time for Wolverine to reluctantly bond with Laura, as the two have a lot in common. There is still plenty of bone breaking and skull splitting action as Logan gets into numerous battles with the villainous Donald Pierce (Boyd Holbrook) and his army of well armed henchmen, including genetically created mutant X-24 (also Hugh Jackman). The battles are quite vicious and gory, especially when Laura enters the fray and she may be more a true Wolverine than Logan at this point. The fact than the film has a strong emotional core makes these scenes even more effective and gives weight to all the violence and keeps us engaged during the character driven moments in-between. A very intense and well done final chapter in Wolverine’s legacy and finally the solo film we have been hoping for.

The film is said to be Jackman’s farewell to a character he has played on screen for almost two decades and he really gives it his all. Jackman was always good at giving Logan that cynical but noble edge and here he adds in a weariness from age and pain as Logan’s abilities are fading due to the long-term effects of the adamantium in his body. He gives The Wolverine a strong emotional center as we see the character succumbing to age and illness, yet still not completely accepting he’s not the hero he used to be. If this is truly his last appearance with his claws, he gives the character a strong send-off with one of his best performances. Same could be said of Stewart as the ailing Charles Xavier. Stewart presents him as sadly feeble, yet still strong of heart and quick of wit. Professor X is endearing as always and it effects us as we watch him dealing with an illness that ravages the part of himself he cherishes most. It is also a fitting farewell to a character he has played as long as Jackman has played Logan, if this is his last time in the role. Dafne Keen makes quite an impression as Wolverine “mini-me” Laura (also referred to by the Transigen bad guys as X-23). She is genetically linked to our hero and is quite the chip off the old block. Keen gives quite the performance as a little girl with amazing abilities and who is quite as much a powder keg as her genetic father. As for our villains, first up is Boyd Holbrook as lead bad guy Donald Pierce. He is threatening and condescending and Holbrook makes the metal-armed thug very unlikable as he should be. There is also Richard E. Grant as Dr. Zander Rice, the man who not only created the new mutants, but had a hand in eliminating the others. He’s more of a generic evil scientist, but works within the context of the story. Rounding out is Stephen Merchant as Caliban, one of the remaining mutants who cares for Charles Xavier and has the ability to track other mutants. Merchant makes a likable character caught in the middle, unfortunately, of Transigens plans for Laura. A good cast helping the director deliver a strong story.

Finally a Wolverine solo film we can sink our claws into. Logan was intense, vicious and yet had emotional depth and solid performances from the cast. It is a fitting farewell to Jackman’s portrayal of Wolverine and Stewart’s Charles Xavier, as well as, an entertaining and very adult superhero flick that pushes the boundary of it’s R-rating. Highly recommended.

I never read the X-Men comics but I am familiar with it’s popular clawed anti-hero and have seen all the movies so, whether they follow the comics’ mythos or not I cannot say and thus take each of the movies for what they are. That being said, I finally caught up with the latest solo adventure with the man known as Wolverine and having enjoyed all of the previous films to one degree or another and being a big fan of Japanese films and culture, I was looking forward to seeing the character’s adventures in the Land Of The Rising Sun… so was it worth the wait?…

The Wolverine opens during World War II in Nagasaki with Logan (Hugh Jackman) a prisoner of war who saves one of his captors, a Japanese office named Yashida (Haruhiko Yamanouchi) when the atomic bomb hits… and without the aid of a refrigerator. The film then picks up in present day with Logan living alone in the wilderness and being haunted by dreams about Jean Grey, a fellow mutant whom he loved but, was forced to kill in X-Men: The Last Stand when she was transformed into the villainous Phoenix. But, a young, psychic Japanese woman named Yukio (Rila Fukushima) finds him and tells him that Yashida is dying and requests Logan come to Japan to say goodbye. Logan reluctantly agrees only to find out that the dying man actually wishes to take Logan’s recuperative powers from him to which the adamantium bladed hero refuses. During the night Yashida dies and at his funeral his granddaughter Mariko (Tao Okamoto) is attacked by the Yakuza and while defending her, Logan finds his recuperative powers are now gone and he is very vulnerable. He still has his metal claws but, his wounds won’t heal instantly as before. Despite his new disadvantage, Logan decides to not only protect Mariko, whom he is starting to fall for, but find out what the Yakuza want from her and what happened to his power to regenerate himself. Wolverine’s previous solo adventure gets a lot of flak from die hard fans but, I enjoyed Gavin Hood’s flick to a degree being free of previous knowledge of Logan’s origins and not bothered by the direction the film took them. The film wasn’t great but, moved well and had some fun action scenes. And fun is one thing James Mangold’s follow up could have used. The biggest problem I have with The Wolverine is that despite some sumptuous cinematography by Ross Emery and a couple of nicely filmed action sequences, the movie is rather uninvolving and kinda dull. I can appreciate that Mark Bomback and Scott Frank’s script plays more like a thriller then a superhero movie and that Mangold gives Logan more of an intensity and takes him a bit more serious then previous films but, it’s the thrills that is the one thing missing from this thriller. The first two thirds of the film focuess on Logan trying to keep Mariko safe while various dull villains, including the mutant Viper (Svetlana Khodchenkova), try to locate and reclaim her. The film is very dialog heavy and that’s fine if the dialog and directions it takes you are interesting. It’s not. It’s a ho-hum conspiracy involving Mariko inheriting her grandfather’s company and the forces aligning to stop it while Logan deals with his own personal issues. The film only picks up somewhat in the last act when Mariko is finally kidnapped and Logan starts to piece things together including his own personally mystery while on a quest to rescue her. Then we get a couple of decent action scenes including one in the snow pitting Logan against an army of ninja. But, even the film’s action scenes never really get moving as the flick seems all to eager to finish them up and get back to gloating villains or Logan growling at someone or brooding. The fight on top of a bullet train in the first act is over just as it starts to get involving. The film lacks any real emotional resonance that would punctuate these dialog sequences and make them more involving. Logan’s ‘romance’ with Mariko seems forced and we never really get a sense of how they are supposed to feel about each other. Logan’s dream sequences with Jean have more resonance and they are few and far between and a figment of his imagination as he tries to deal with his grief and guilt over her death. It’s the only part of the movie that really worked. The final confrontation with the villains also lacks punch, despite all the punching and sword swinging, as the villains are generic and bland. An early duel between Logan and Mariko’s greedy father Shingen (Hiroyuki Sanada) has far more impact then his climactic battle with the giant mechanical CGI Silver Samurai… whose occupant is obvious long before we find out their identity.

Mangold gets a good performance out of Jackman, who is usually reliable anyway, and benefits from the character’s already being established. But, his supporting cast really doesn’t come alive and none, except for the somewhat spunky Fukushima, really make an impression. First time actress (maybe not a good idea?) Okamoto is doe-eyed and bland as Mariko and Khodchenkova gives us one of the dullest mutants in an X-Men themed flick. The Silver Samurai is introduced in the last 10 minutes so, it has no personality and thus no menace and is as cold as the metallic armor encasing it.

So, while The Wolverine is sumptuously photographed, competently made and takes Logan to an exotic location, it doesn’t do anything really interesting with him and the characters journey is a rather routinely portrayed one. The idea of involving the popular Wolverine in a thriller in a foreign land a la James Bond was a good idea, it’s just too bad they forget some of 007s thrills to go along with it. There is however a really cool mid credits sequence which is by far the best scene in the movie and harkens to, hopefully, better things to come as The Wolverine is a thriller without claws.

A cool new shot from “The Wolverine” Tweeted by director James Mangold! 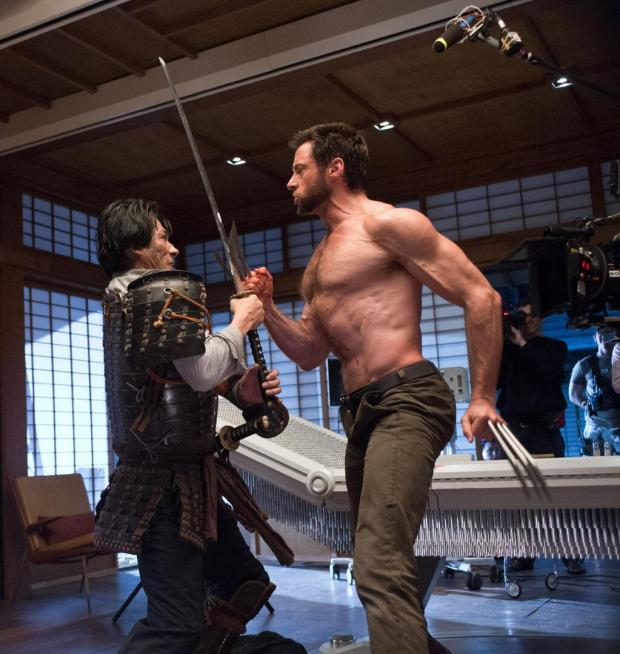