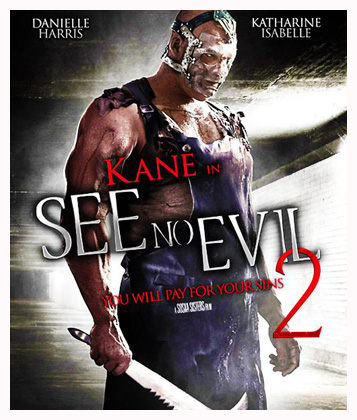 I’m not a big fan of the original See No Evil. Despite the use of the imposingly massive WWE superstar Glenn “Kane” Jacobs, the film was a by-the-numbers slasher that generated very little suspense and it’s juvenile delinquent characters didn’t generate much endearment to give us someone to root/fear for. But the film does have a bit of a following and did well, especially on home media. So, after 8 years…Jacob Goodnight is back and he’s not only bringing fan favorite scream queens Danielle Harris and Katharine Isabelle along with him, but he is being directed by the devious duo behind American Mary, the Soska Sisters, as well.

The story opens the same night as the massacre at The Blackwell Hotel, with pretty morgue attendant Amy (Danielle Harris) about to leave her shift and head out to celebrate her birthday. But with bodies from the massacre heading in, Amy decides to stay and help her co-worker Seth (Kaj-Erik Eriksen) with the added workload…and thus her friends, including vixen with a morbid side, Tamara (Katharine Isabelle) decide to surprise her at the morgue with an impromptu birthday party. But there is still some life in the prone corpse of vicious serial killer Jacob Goodnight (Glenn “Kane” Jacobs) and soon he rises from his slab, with an assortment of postmortem surgical tools at his disposal, to continue his work by slaughtering the “sinners” who are partying in the morgue. Will any of them escape alive as Goodnight seals them in and begins adding to the bodies already stored there?

With the Twisted Twins taking over from ex-porn director Gregory Dark, the film is an improvement over the first one and for some very surprising reasons. The Soskas are working from a script by Nathan Brookes and Bobby Lee Darby and thus it doesn’t quite have the delightfully eccentric tone of Mary, that they wrote themselves, but it does have their style and does have a bit more fun with this slasher sequel than the deadpan and too-serious-for-it’s-own-good first flick. At first I was a little disappointed as the film started out and seemed to be a bit routine coming from directors whose work is anything, but until the second half suddenly cranks things up considerably and that’s where the film surprised me a little bit. And it’s not with the kills, which are cool, that the Soskas really got my attention with, but with some surprisingly poignant moments between the characters, mostly involving Harris’ Amy, that really resonated and really added something to the proceedings. It’s been a while since I’ve seen a slasher/horror that took the time to have such nice character moments between the carnage and it really added to the endearment of those characters and the suspense of wanting them to get out of there moderately intact. The film also deviated at times from the slasher formula and that added some freshness to it and the Soskas, as with American Mary, give us some disturbingly gruesome moments, but without going overboard or being gross for gross sake like SNE #1. A little restraint makes the violent moments all the more effective when they do come…and there are a couple that elicited an out loud “whoa” from me as I watched. Add in some nice moody cinematography by Mahlon Todd Williams that takes good advantage of the city morgue setting and a nice score from The Newton Brothers and you have an entertaining little slasher that does have the usual slasher plot holes…such as, are there so few exits in such a large public building that Goodnight could seal them all on all floors and without anyone knowing…and why are the guests’ cellphones locked in a safe?… but it still entertains like it’s supposed to.

As for the cast… “Kane” is as imposing as ever as Goodnight. Harris does really strong work here. Not only in creating a little depth for Amy, who has chosen a career that is obviously not popular with her family, but really shines in some of those character moments I mentioned before. Amy is a strong, though slightly cynical, heroine with guts and a heart. She also has a nice chemistry with Eriksen, who is good as Seth. Seth is crushing on her big time and she knows it and the scene when they reveal their mutual feelings for each other works really well and the actors’ chemistry makes it work despite there being a 7 foot madman stalking them at the moment. Isabelle is a hoot as the promiscuous babe with a dark side, Tamara. It’s not a deep role as her Mary Mason and it seems like, this time, she’s having some fun with a more ditzy part and letting Harris do the more serious emoting. Her postmortem lap dance for Jacob Goodnight’s corpse is a fun number, to say the least. The rest of the cast are solid and despite Amy’s brother Will (Greyston Holt) being a bit of a self-centered jerk, we have a fairly likable cast of supporting characters with Chelan Simmons as pretty blonde Kayla, Lee Majdoub as Tamara’s boyfriend Carter and Michael Eklund as the chief morgue attendant Holden. A much more endearing bunch than the angry delinquents that populated the first flick.

So, See No Evil 2 may not be a classic, but it is a solid and entertaining slasher that has some surprisingly effective quieter moments in-between the well-orchestrated carnage. The Soska’s bring the action and suspense, especially in the second half and even with it’s barely 90 minute running time, give us some nice resonating character scenes bolstered by it’s lead actors especially, Harris, who does some of her best work. And that’s what impresses about the Twisted Twins the most…they can deliver some very sick and twisted moments, but can also deliver some poignant quiet moments in between, just like the little conversations between Mary and Lance in American Mary. Another intriguing film from two of the more original filmmakers out there. 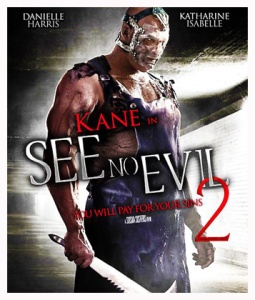 The Soska sisters, who brought us the disturbing and original American Mary with the lovely Katharine Isabelle, have followed that up with a sequel to the slasher See No Evil which featured WWE superstar Kane (Glenn Jacobs) as homicidal madman Jacob Goodnight. I was not a big fan of the original but, the Soska’s involvement and now this really cool looking trailer have my interest very peaked… not to mention it stars Isabelle and Danielle Harris, two of today’s most popular scream queens! 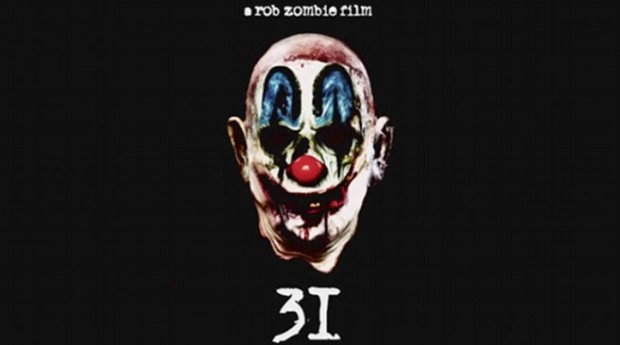 Filmmaker/musician Rob Zombie is headed back to the director’s chair this fall with a new and original horror film simply titled “31” referring to Halloween night. The controversial writer/director has been rather tightlipped about the film’s plot and details, save to say it is an original idea not based on anything previously seen. While details are still slim… for now… we at least have these two production photos to wet our gruesome appetites… 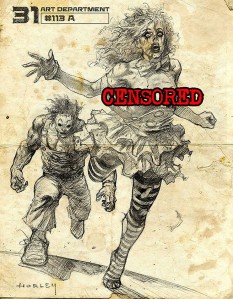 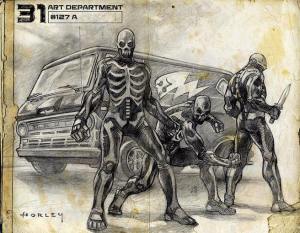