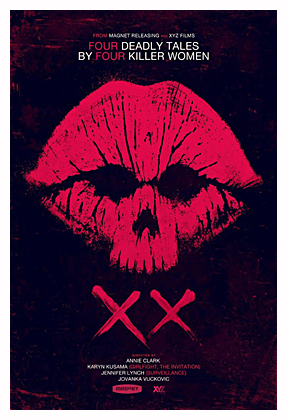 I’m a huge fan of female filmmakers making their voices heard in the horror genre, so, obviously, I was intrigued about this new anthology featuring four stories all written and directed by women. Unfortunately, like in most anthologies, the flick is a bit of a mixed bag with not all stories being equal.

First story is the best and is based on a short tale by Jack Ketchum. It’s written and directed by Jovanka Vuckovic and is a disturbing tale. The Box has mom, Susan (Natalie Brown) out in the city for the day with her kids, Danny (Peter DaCunha from Hellions) and Jenny (Peyton Kennedy). Danny spies a man with a present and his curiosity gets the man’s attention and he’s offered a look inside. Whatever he sees disturbs Danny greatly and he stops eating. He refuses to talk about it, but as he slowly opens up to his sister and dad (Jonathan Watton), they stop eating as well. With her family wasting away before her eyes, Susan is determined to find out what was in that box. This is a tense and unsettling episode with some disturbing imagery that has lasting effects even after it’s over.

Next story The Birthday Party, is directed by Annie Clark and is co-written by she and Roxanne Benjamin and is the least of the four tales. This one has self absorbed mom Mary (Melanie Lynskey) throwing a party for her little girl (Sanai Victoria) and finding her husband (Seth Duhame) dead in his home office. Not wanting to ruin the party, she now must find a way to hide his body. That’s it. It’s as uninteresting as it sounds.

Next story is written and directed by Roxanne Benjamin and is called Don’t Fall. This is a fun and effective episode finding a young woman (Breeda Wool) with a fear of heights going on a desert camping trip with friends. She runs afoul of an ancient evil entity in a cave and is transformed into a demonic creature that now stalks her companions. It’s simple, a bit gory and is a more straightforward and fun horror segment.

Anthology ends on a so-so note with Her Only Living Son. Directed and scripted by Karyn Kusama (The Invitation), this is a ho-hum tale of single mother, Cora (Christina Kirk) whose son, Andy (Kyle Allen) has suddenly turned violent. As she tries to find out what’s wrong with his behavior, she begins to suspect that his coming of age may have triggered both a horrifying transformation and unveiled a revelation about his true “father”. This segment is nothing new and ends rather abruptly and un-satisfyingly.

There are some really cool stop motion animated framing segments to the stories directed by Sofia Carrillo, that are probably the most effective thing about this uneven anthology. I still recommend one give it a look based on the framing bits and the stories that work, as it is still worth checking out…just not the total success one hoped for from some of the up and coming ladies of horror. 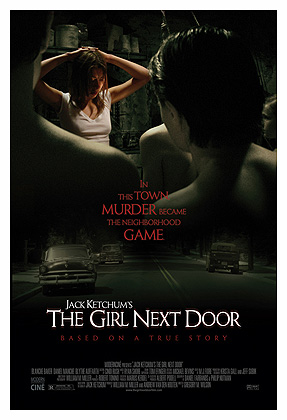 I’ll start off by saying that this is a highly unpleasant film and I don’t think I could ever watch it again. That being said, I have to give the filmmaker’s credit for making a very effective film that is all the more horrifying since it is partially based on the real life torture and murder of Sylvia Likens in 1965, by not only the woman whose care she was in, but by the woman’s children and some of the neighboring children as well. The source material for the film is Jack Ketchum’s fictional novel of the same name which is loosely based on the Likens murder and tells the story of two girls Meg (Blythe Auffarth) and Susan (Madeline Taylor) who are sent to live with their Aunt Ruth (a sinister Blanche Baker) and her three sons after the death of their parents. Ruth already shows signs of being unhinged as she treats the neighborhood kids to alcohol and cigarettes, but really takes a dislike to the very pretty and mature Meg, especially when she takes away the attention of the boys from Ruth. Soon Meg is targeted for severe punishments that escalate into imprisonment, torture, rape and mutilation by Ruth, along with her sons and their friends. Hidden away and with no one to come looking for her, Meg is helpless to their increasingly violent and depraved acts while a fearful and equally helpless Susan can do nothing to save her and the neighbors don’t want to know anything beyond their own idyllic four walls.

As directed by Gregory M. Wilson, this is one hell of a rough movie to sit through. Wilson wisely implies the worst of the torturous acts, but there is enough of it for you to get the idea of what kind of nightmare this poor young girl is going through and when his camera turns away from the rougher events, you know enough of what is going on to be properly mortified as your imagination does all the work. And what’s even more horrifying than the acts committed, is that they are being committed willingly and almost enthusiastically by so many and by those so young. Not only did this poor girl do nothing to instigate this, but as you’re watching, you can’t help think that to a degree, this actually happened. Obviously, Ketchum jacked up the viciousness and cruelty to make his novel more of a horror story and changed names and certain details, but it is still based on fact.

The cast also help make this very effective, with Baker being a completely detestable and horrible person, simply a monster in suburban housewife clothing. Auffarth makes a sweet and undeserving victim, who we really like and thus feel terrible for, as we watch helplessly from our seats as she becomes the object of the worst in human nature and by those who themselves are far too young to be even thinking of such vile acts, much less engaging in them. Auffarth’s portrayal of Meg’s gradual giving up and submitting to what’s being done to her is enough to crack even the hardest of hearts.

This is not a film I can recommend per say as much as just acknowledging the filmmakers’ accomplishment at the telling of a truly horrible fact based series of events. This was probably not an easy book to adapt, but the script by Daniel Farrands and Philip Nutman along with Wilson’s direction, are both unflinching and yet restrained. They get the story told without crossing the line into exploitation, as it easily could have done.

So credit where credit is due, you horrified a guy who has been watching all kinds of horror movies for over four decades and seen some truly gut-wrenching things committed to film. It was an effective and well made movie that I never want to watch again. Also stars Grant Show and Catherine Mary Stewart as the oblivious parents of David (Daniel Manche), one of the few kids who shows a bit of moral backbone and William Atherton as the adult David whose painful remembrance narrates the tragic tale. A horrifying film, but one that avoids being exploitive about its easily exploitable subject matter.

3 stars. I just feel my usual rating style would be a bit crass considering the truth based subject matter.