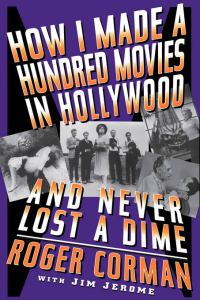 I know this is the Movie Madhouse but, I will review a book now and then, one that I really loved or one that pertains to the movie world….and what pertains more than a book by one of the greatest producers that ever lived… Roger Corman!

In the pages of this autobiography from legendary film producer/director Roger Corman, he tells firsthand of his journey to becoming one of the most successful filmmakers of all time. He details his humble beginnings in Detroit to his family’s move to Beverly Hills then on to college and his first job at a major studio where the film-making bug first bit. He shares with us how he cleverly financed his first film The Monster From The Ocean Floor and thus began his prolific…and sometimes tumultuous…career as a director and producer. Corman takes us on a fun ride of clever financing, seat-of-your-pants film-making, world travel, giving first opportunities to many future stars and legends and even some of the lovely ladies he met making movies, including his wife Julie. It’s a vastly entertaining book from the man himself detailing how he was able to beat the Hollywood system and become the film geek, household name that he is. The book traces his life and career up to the point where he returned to directing after a long hiatus to helm Frankenstein Unbound, which, as of now, stands as his last full length feature as a director.

As a huge fan of Corman, I had a blast with this book. The master producer details how he produced films his way and rarely had a box office disappointment in his illustrious career. He gives generous details on the making of such early classics as It Conquered The World and Not of This Earth to some of the New World classics such as Death Race 2000 and Piranha. We get anecdotes from some of the talents who got their start with Corman and went on to be legends themselves like Joe Dante, Francis Ford Coppola and Sylvester Stallone and also from Corman regulars like Dick Miller, Chuck Griffith and Beverly Garland. It’s a humble telling of a fascinating life from the man who lived it and a host of people who had the honor of working for/with him. If you are a fan of Roger Corman and his films, it is a must read. If you are simply a fan of movies and the film-making process, I still highly recommend you hear these great tales about one of Hollywood’s greatest maverick film-makers from the man himself and some of those who joined him on his ongoing journey. 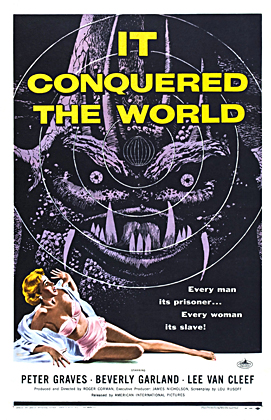 I recently began reading Roger Corman’s autobiography How I Made A Hundred Movies In Hollywood And Never Lost A Dime and it made me want to revisit some of his earliest films that I first saw on TV’s Chiller Theater and Creature Features as a kid.

One of Corman’s earliest flicks as a producer and director, this thriller tells the story of an alien invader from Venus, who isn’t particularly happy that earth has started sending satellites into space. It comes here to invade using bat-like creatures to take over people’s minds and with the help of bitter earth scientist, Dr. Tom Anderson (Lee Van Cleef) who believes earth needs ‘saving’ by this higher intelligence. Standing in the way of this nefarious plot is scientist Dr. Paul Nelson (Peter Graves) along with some feisty heroines and the usual soldiers and military types that populated films of this era.

Corman directs with a serious hand, from the script by Lou Rusoff and frequent Corman collaborator Charles B. Griffith, despite that his creature looks like a combination of cucumber and crustacean. He shot it in about two weeks on a budget far lower than the average Hollywood flick of the time and the production looks better than one might expect due to Corman thriftiness. While the creature FX are cheesy and the dialogue equally so, it ads charm to a fun movie, all the more amusing for taking itself so seriously despite it’s outlandish plot and monster. Corman gets good work out of his cast, which also includes frequent Corman actress Beverly Garland (Swamp Woman, Not of This Earth) and Sally Fraser, who was in such cult classics as Earth vs. the Spider and War Of The Colossal Beast. The film, due to it’s small budget, does focus more on character drama than creature hi-jinx, but it’s atmospheric and keeps one interested till the military finally take on the alien dictator in true 50s creature feature fashion. There is also a very effective mood building score by Ronald Stein who composed for many a Corman classic. If you love the sci-fi flicks of this decade, this is one of the classics and an early example of the low budget entertainment that made Roger Corman one of the most successful producers of all time and an underrated director.

I had a fun time watching this again. It’s judged due to it’s cheesy creature, but the monster has become iconic, representing the creature features of the 50s and the film is better than it is given credit for. It obviously influenced future alien invader flicks, just look at Without Warning’s flying creature weapons as a perfect example and as usual with a Corman production, features future stars like Van Cleef and Graves. Corman is now a legend for making these kind of inexpensive but profitable features and who cares if it’s title monster looks like it could hide in a salad bar or seafood buffet. A fun example of what made the 50s era monster flicks so endearing. Also features frequent Corman actor, the legendary, Dick Miller as a soldier.

3 alien vegetable/crustacean hybrids with a taste for megalomania.

it conquered the world