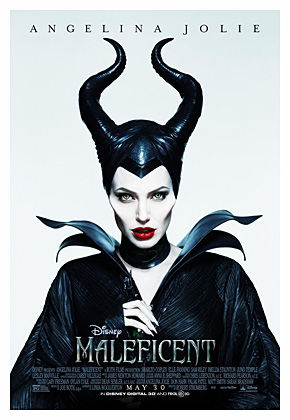 I’ll start out by saying that I enjoyed Maleficent very much. It was very entertaining with Angelina Jolie knocking it out of the park in a role she seems born to play. Be warned it’s not the Maleficent we know from Disney’s Sleeping Beauty, but one portrayed more as a woman scorned and wronged, who must learn to let the warmth back into her heart after it’s turned cold by betrayal…not the traditional character we know, but very Disney nonetheless…and did I mention Jolie owns in the part?

Live action version tells of powerful but benevolent winged faerie, Maleficent (Angelina Jolie) who protects the fantasy realm of The Moors from the human kingdom and it’s ruler King Henry. As a little girl, Maleficent (Isobelle Molloy, Ella Purnell as a teen) has met a young peasant boy named Stefan (Michael Higgins) and as they grow up as friends, they fall in love. Stefan though, has his eyes on the castle and his ambitions gain him a favorable position with the king and thus he abandons Maleficent. Henry forces a confrontation with Maleficent and the faerie folk and when she defeats him, he declares any who shall bring him her head, shall be his heir. In an ultimate act of betrayal and to gain the heirless Monarch’s appointment as his successor, Stefan (now Sharlto Copley) drugs the forgiving faerie and after finding he doesn’t have the heart to kill her, cuts off her wings to fool Henry into thinking she is slain. Of course, this leads to the vengeful Maleficent returning to curse the first born daughter of now King Stefan that on her 16th birthday Princess Aurora (Elle Fanning) will prick her finger and fall into a death-like sleep to only be awaked by true love’s kiss…something the hard-hearted Maleficent believes does not exist. As the powerful sorceress watches the angelic little girl grow up toward her cruel fate and receives love from a child that sees her as a faerie god mother, something starts to change in Maleficent making her wonder if perhaps this sweet child doesn’t deserve her wrath…but as Maleficent deals with her conflicting emotions, a vengeful Stefan plots to finish what he started all those years ago.

Linda Woolverton’s screenplay obviously not only presents the timeless classic of Sleeping Beauty from Maleficent’s point of view, but adds some twists as well, as we are shown a woman who is forced into her role as a villain by betrayal and is not beyond redemption. It makes Stefan the true villain of the piece as an ambitious and then vengeful man, who forces the powerful faerie’s hand. It makes Maleficent more of a tale of love, betrayal and redemption and depending on how much you are endeared to the evil Maleficent from Disney’s classic animated film, will determine how far you will go in enjoying this. Personally, I would like to have seen Jolie as the evil Maleficent for a bit longer then allotted here, but I overall enjoyed this new take and the new twists the story gives to a classic tale. The film is very well directed by SPFX man Robert Stromberg (who did FX work on Avatar and Oz The Great And Powerful) though I did feel he could have added a little more intensity here and there. For a first film and one with epic scope, he does well enough and delivers an entertaining family film that keeps the adults perhaps a bit more involved than the kids. The film is visually spectacular and the CGI creatures are beautifully designed and rendered, including the classic dragon that we don’t see enough of. There is also a nice score by James Newton Howard who, ironically, also did the score for Snow White And The Huntsman. Despite all the talent involved, the film belongs to star and producer Angelina Jolie who is simply perfect as the classic Disney character come to life, even with the modern changes.

Angelina Jolie is a performer sadly the subject of continual gossip more then recognized for the skilled actress that she is. No more proof then her performance here that perfectly walks the line of over-the-top scenery chewing, yet fills it with powerful emotional depth and never once slides into camp. She guides us from her majestic beginnings as a strong yet compassionate faerie to her slide into heartless villainy at the hands of Stefan’s betrayal and then her redemption back to someone the audience will be cheering for when all is said and done. My only gripe is her moments of true villainy are far too short and the scenes which we get to enjoy Jolie at her Joan Crawford best are sadly too few. I enjoyed every phase of the character’s progression, but when Jolie is bad, she is so damn good and there wasn’t enough of it. The supporting cast are fine. I actually though Copley was a little weak as Stefan, but not enough to do the film harm and he was dislikable which was the character’s job. Fanning is pretty and sweet and portrays the innocence of youth just fine. Sam Riley is lively as Diaval, Maleficent’s crow turned human assistant. He has a good rapport with Jolie though, he is upstaged by his CGI bird incarnation. There is also Brenton Thwaites as Phillip, who represents the possible true love’s kiss and he is perfectly suitable as the handsome boy that catches Aurora’s eye, but his role is small as he enters the film late. There are also numerous CGI fantasy supporting characters that are given some nice realism in the rendering. The young actors listed above that portray Maleficent and Stefan as children all do very well, as do Vivienne Jolie-Pitt and Eleanor Worthington Cox as young Aurora. The scene between Jolie and her daughter is magical and the obvious casting worked like a charm.

So, Maleficent gives a new spin on a classic character and as long as you’re open minded to the “real” story of Disney’s greatest villainess, you are in for an entertaining movie. Jolie owns the role and commands your attention whenever she is onscreen, which is most of the time, and she need only glare to portray the emotions going on inside her legendary character. Yes Jolie is that good and while there is some spectacular visuals, a lot of exciting action and a relatively fast pace at under 100 minutes to go along with her performance, it’s her show. While she already has an Oscar on her shelf, now she can claim to have out-acted Captain America, Spider-Man, The X-Men and Godzilla all in the same summer. Now THAT is an accomplishment!