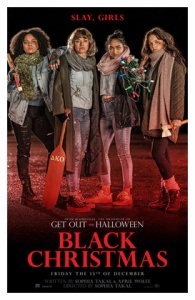 Remake, or re-imagining takes place on a college campus at Christmas break. The MKE sorority girls put on a controversial Christmas show at the DKO fraternity, calling out an alumnus for his rape of sorority member Riley (Imogen Poots). Soon the ladies of MKE and other sororities, start to fall one by one, as a group of hooded and masked killers stalk them across campus.

Flick is directed by Sophia Takal from her script, co-written by April Wolfe. In the age of #MeToo the film faces the issue of sexual abuses on college campuses head on, as well as the disbelief and stigma that falls on the accuser instead of the accused. In this aspect, the film achieves its goals. It’s so busy with its messages, though, that it almost forgets to be a horror film. It takes almost an hour for the flick to really get going and the kills are mostly offscreen, muting their impact. Aside from being set in a sorority and a few scattered elements, it doesn’t really follow the 1974 original, or the previous 2006 remake. That isn’t necessarily a bad thing, but it doesn’t really do too much new with the stalker premise, either. On a horror film level, it’s derivative, despite adding a supernatural element to its story not present in the other versions. Its climax is a bit overblown and it’s at that point where the film’s message starts to become sledgehammered, when the flick already made it’s point so well in the first half. Also, if there is a supernatural element controlling certain individuals, are they really to blame for their actions and deserved of their fates? Wouldn’t it have served the story’s point better if they were simply misogynist a-holes and not in a black magic thrall? The cast are fine, especially Poots as the emotionally wounded Riley. Veteran actor Cary Elwes, as a douchey professor, does overdo it a bit. He practically has a neon sign saying “bad guy” floating over his head the entire movie. There are some nice nods to the original like the address of a sorority being “1974”, the year the first Black Christmas was released, and it does have a few intense moments. Overall, It’s a film that delivers its messages, sometimes with a heavy hand, but boldly straight on. Unfortunately, though, it skimps somewhat on being an actual horror flick.

Graphic novel based film finds young, eccentric loner Barbara Thorson (Madison Wolfe) believing that she can kill giants and claiming to have done so in the past. Her sister (Imogen Poots) is trying to take care of her and her older brother (Art Parkinson), but Barbara’s constant behavior issues and insubordination at middle school is taking it’s toll. Barbara finally finds a friend in new student Sophia (Sydney Wade), who has just moved to the US from England. The two girls bond and while Barbara slowly let’s Sophia into her complex fantasy world, the psychologist at school, Mrs. Mollé (Zoe Saldana) tries to find out what Barbara is really trying to escape from in her fantasies. Meanwhile, Barbara prepares, as a new colossal adversary nears, one she might not be able to handle.

Sweet-natured tale is very well directed by Anders Walter from a script by Joe Kelly, based on the graphic novel of the  same name by Kelly and Ken Niimura. This is the kind of movie that could have drowned in over-sentimentality, or sugar-coated the more serious issues, but it is handled with just the right mix by director Walter and Kelly’s script. The film never patronizes Barbara’s living in her own fantasy world, nor does it overplay or exploit the real story of a young girl unable to face a painful reality in her life. We see how involved Barbara’s fantasy world is and also see how it alienates her from her classmates and even makes her the target of the school bully (Rory Jackson). Walters slowly let’s us through the facade, giving us clues as to what is really happening, as Mollé tries to get through to the girl. We are drawn in, as this and Barbara’s friendship with Sophia threatens the walls she’s thrown up. As the story plays out, it is ultimately Barbara herself who must tear down those walls and face her painful reality with the same courage she faces her imaginary giants. It’s all splendidly handled by the first-time feature director and very engaging despite being a very familiar story. On a technical level the film features some nice cinematography by Rasmus Heise of the Belgium and Ireland locations which stand in for the East Coast, United States. The FX portraying our fantasy creatures are very well executed and not over-used and Walter gives the film some nice atmosphere, aided by an effective score by Laurent Perez Del Mar.

The director gets good work from a solid cast. Madison Wolfe is very strong in her portrayal of Barbara. A complex young girl, who is eccentric and imaginative and who creates an alternate reality for herself to hide from pain she can’t handle in her real life. She keeps Barbara likable, even when being difficult and handles the transition from denial, to fear and to finally facing those fears very well. Zoe Saldana is also good in what could be seen as a clichéd role. She gives Mrs. Mollé a sense that she really cares about Barbara and conveys the patience and frustration of trying to reach her. Sydney Wade is sweet as her new friend, Sophia and Imogen Poots is also good as Karen Thorson, a young woman being overwhelmed by what’s going on around her and trying to handle the care of her siblings and maintain a grip on her own life. A strong cast who do good work.

This is not the first film to feature a child hiding from intense emotions in a fantasy world. It’s also not the first film to feature characters trying to reach that child. It does feature a strong debut from a first time director, who mixes all the elements well and in the right amounts. He treats his main character with the respect she deserves, gives her fantasy world the sense of wonder needed, never exploits the more serious story elements, or takes the easy way out by letting this degenerate into a routine tear-jerker…which it is not. A very entertaining and heartfelt movie that deserves more attention than it’s quiet release in limited theaters and on VOD gives it. Highly recommended.

Flick is written and directed by Jeremy Saulnier who also made the entertaining but somewhat overrated Blue Ruin. The story finds down-on-their-luck punk band the The Ain’t Rights (Anton Yelchin, Joe Cole, Callum Turner and Alia Shawkat) taking a gig at a remote backwoods club in Oregon run by neo-nazis and heroine dealers. They walk in on the murder of a local girl by one of the skinheads (Brent Werzner) and now find themselves trapped in the club green room, with the dead girl’s friend (Imogen Poots), as the owner, Darcy (Patrick Stewart) tries to figure out how to keep these outsiders quiet…permanently. Soon the band are in a brutal fight for their lives as Darcy and his white supremacists try to set their fatal plan in motion.

Saulnier creates a vicious and brutal little thriller with some surprising horror movie level gore and an intense last act, but like his Blue Ruin, it’s not quite as suspenseful and gripping as it could be. One of the reasons is that it takes almost an hour before it really starts to get intense and there is a about a half hour of meandering about after the set-up. There is some awkward negotiating back and forth through a locked door that occurs at this time and it really doesn’t go anywhere till Darcy finally sends his thugs in after them. Another reason is that the character development is a little thin, especially on the bad guy’s side and thus the villains, aside from Stewart, could have had more menace and we could have been a bit more endeared to the band. Once the group leaves the green room, there is some cat and mouse action between skinheads and punk band that provides some brutal and violent results. Then the movie hits it’s stride and we are engaged till the final blood-soaked confrontation with Darcy and the survivors. Here in the final third, the flick works and is at it’s most effective.

The cast perform well enough, though the lack of strong character development does hinder their efforts a bit. The late Anton Yelchin is our lead as the cowardly Pat who has to rise above his fears to fight for his life and it is a cliché role, but Yelchin is solid as always. Stewart oozes menace as the neo-nazi leader Darcy and the choice to play the role more understated makes Darcy far more scary than an over-the-top villain. Cole, Turner and Shawkat are fine as the rest of the band, but again, the lack of stronger character development leaves us less endeared to them, especially Turner’s Tiger, who is focused on the least. Poots is fine as Amber, the friend of the murdered girl and while Amber is a fighter, she is also underdeveloped and sort of just thrown in with the band when things hit the fan, so we never develop a strong bond with her character either.

Not a completely successful thriller, but still an entertaining and sometimes very brutal one. Would have been more effective with better character development on both sides, especially with the bad guys and if the middle act wasn’t a bit stagnant. It does click into gear in the final third and then we get some suspenseful moments, some vicious violence and some of the intensity we came for. Jeremy Saulnier seems like a filmmaker in progress and may yet really wow us when he connects on all cylinders.