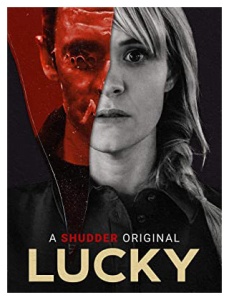 Writer May (an excellent Brea Grant) believes a man is stalking her. Each night he appears and breaks into her house and she has to fight him off. Her husband Ted (Dhruv Uday Singh) seems to be very glib when discussing it, to the point where he leaves May and goes to stay with his parents, when she confronts him about his cavalier attitude. Even the police don’t seem to be taking her very seriously. Feeling abandoned and alone, May decides to deal with it in her own way, as each day the mysterious stalker (Hunter C. Smith) returns. Is this all in May’s head?…or is someone really out to hurt her?

Film is directed by Natasha Kermani, who gave us the interesting Imitation Girl, from a script by star Brea Grant. The film is partially commentary on how female victims of sexual assault, or harassment, become the ones under scrutiny and who have to prove themselves amid disbelief. May constantly fights to be believed and finds herself having to defend herself to everyone around her. Lucky is also about living in constant fear after such a trauma and learning to confront those fears. With each encounter, May becomes stronger and more resilient, as the mysterious attacker gets bolder and more violent. The people around her also become more and more dismissive and are of no help, so she is on her own. If it seems like something is a bit off here, with so many people not believing and even patronizing May, you would be right. It’s a slasher film as a metaphor for trauma and it’s effects. If there is anything predictable about the unconventional Lucky, is that this obviously isn’t going to end like a typical slasher movie and everything is not what it outwardly seems. We also know from early on there is more beneath the surface than Kermani and Grant are telling us, or plan to tell us. There is no spoon feeding here, or revelatory reveal. It’s up to the viewer to fill in the blanks and the pieces are there if you want to put them together. The film may ultimately be unsatisfyingly ambiguous to some, but as someone who grew up in a household with an abusive parent, the film’s messages about alienation, trauma and living in fear are well received, as are those of learning to face those fears and fight back. Another bold and innovative film from Kermani and a strong, clever script by Brea Grant. Lucky is streaming on Shudder.