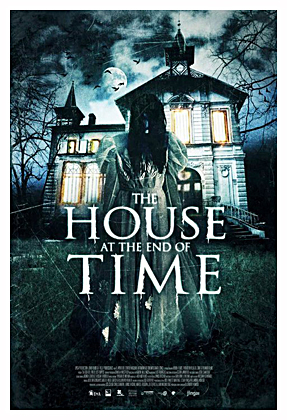 Dulce (Ruddy Rodriguez) has served 30 years in prison for the alleged murder of her husband Juan Jose (Gonzalo Cubero) and the disappearance of her son Leopoldo (Rosmel Bustamante). As per the law, the now old woman is released back to the house where it occurred, to finish her sentence. A young priest (Guillermo Garcia) believes she is innocent and begins to investigate the house which has a history of disappearances. As he questions Dulce about what happened in that house 30 years earlier, an unbelievable tale unfolds…a story that may still be going on within the walls of this unusual house.

Writer/director Alejandro Hidalgo has crafted a very spooky and unnerving flick that is quite full of surprises especially in its revelatory last act. While his visual style is simple and the colors of Cezary Jaworski’s cinematography are muted, Hidalgo supplies plenty of atmosphere to keep us on edge as the hidden truths are revealed over the course of the film. And while there is a lot to chill us and make us gasp, there is also a very sentimental center to Hidalgo’s film with it’s subplots about Dulce’s two sons, her fragmenting relationship with her husband and the themes concerning the power of a mother’s love. Hidalgo skillfully adds these elements without diluting the spookiness or the strength of the more intense moments. The film is a supernatural horror and the moments of drama only serve to get us emotionally involved, as well as, gives us crucial information as to what led to the fateful events that caused Dulce to be blamed for murdering those she loved. When events are cleverly played out for us in the last act, Hidalgo delivers some surprises worthy of M. Night Shyamalan at his very best. All this is intensified by an appropriately haunting score by Yoncarlos Medina and some really atmospheric Venezuelan locations.

The cast are all effective. Rodriguez is good as Dulce and must play double duty with portraying the woman in her youthful past and as an old woman. She has an intensity and is sympathetic, especially when the story details are revealed. Young Rosmel Bustamente is also very good as son Leopoldo and handles the varied emotions needed for his crucial role very well for a kid. Cubero is solid as husband Juan Jose whose reaction to the disintegration of his family puts the character through changes the actor portrays efficiently. Young Hector Mercado is cute and feisty as little brother Rodrigo and Guillermo Garica gives us a caring and intelligent man of the cloth who sympathizes with a woman thought to be a killer of the worst kind. A solid cast.

This film came with a reputation and lived up to it. It delivered some really nice atmosphere and chills and gave us some startling surprises via writer/director Alejandro Hidalgo. If you like supernatural haunting flicks like The Orphanage, with a little Twilight Zone thrown in, then this Venezuelan flick is for you. Hidalgo is a talent to keep an eye on.