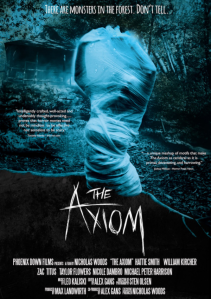 Indie horror finds pretty McKenzie (Hattie Smith) and her brother Mark (Zac Titus) traveling with friends to the expansive Cinder Park to find their lost sister Marylyn (Maria Granberg). They are told by local bar owner, Leon (William Kircher) that Marylyn has gone through a portal in the woods that leads to an alternate dimension called “The Axiom”. Desperate to find her sister, McKenzie follows his directions, despite her disbelief and soon she and her friends find out The Axiom exists and it is a dangerous place indeed.

Alternate dimension spin on the traditional cabin in the woods horror…and there is a cabin…is written and directed by the aptly named Nicholas Woods. It’s a low budget indie, but one that tries to freshen up the traditional deep woods horror with some inventive twists. It has some effective moments, as our group of five meet some strange beings in this otherworldly place and experience delusion and madness amongst themselves. There is a vague explanation as to how this portal got there and director Woods knows not to let his ambitions exceed his budget. There is some effective violence and bloodshed and the sparse seen occupants of The Axiom are well rendered, mostly with practical effects. The cast try hard, with Hattie Smith making a very suitable final girl. Add in murder, betrayal and a last act that goes in an interestingly different direction and it’s an offbeat and imaginative effort that’s definitely worth a look. Also stars Taylor Flowers, Nicole Dambro and Michael Peter Harrison as Edgar, Darcy and Gerrik, respectively, the rest of the group of friends.

You can fInd The Axiom on Amazon Prime.

A new and bloody red band trailer has arrived for the upcoming Hellboy reboot. Looks like it could be fun and I am a fan of director Neil Marshall, but still am of the old school thinking that if you are going to spend money on a new Hellboy flick, let Del Toro finish his trilogy with Perlman. New flick opens 4/12/19 stars David Harbour as Big Red and Milla Jovovich as the villain.
-MonsterZero NJ