This is one book review, I definitely need no excuse to post. Not only is it a great chronicle of the making of some of the early classics of the legendary John Carpenter but, an amazing album of behind the scenes shots from some of my favorite films from my favorite filmmaker…

ON SET WITH JOHN CARPENTER by Kim Gottlieb-Walker

John Carpenter is perhaps my all time favorite filmmaker and, as my favorite of his works are those from the 70s and 80s, this book was an amazing trip down memory lane and an incredible glimpse behind the scenes at some of Carpenter’s early classics as told through the talented camera lens of Kim Gottlieb-Walker with some comments and anecdotes from Kim, John Carpenter and some of those involved. The photography is not only breathtaking but, captures a side of the productions of Halloween, The Fog, Escape From New York, the Carpenter produced Halloween II and Christine that we’ve never seen before. Gottlieb-Walker was hired by Carpenter and Debra Hill as his unit photographer and as such, she captured some wonderful behind the scenes shots of cast and crew from these classic films. Add the commentary and some delightful stories from the photographer, Carpenter himself and others such as Adrienne Barbeau, DOP Dean Cundey and many, many more, and this book becomes a trip back in time to a long-gone era and a side of these productions that we have only barely glimpsed previously. It chronicles the rise of a legendary director and some other now very established filmmakers, as well as, shares tales of some sadly gone talents such as Lee Van Cleef, Issac Hayes, Donald Pleasence and pioneer producer Debra Hill. As a Carpenter fan, or simply a fan of filmmaking, this is a must-have book with some simply amazing photos that will take us back to the days when a group of young filmmakers and actors were making their dreams… and some of our favorite films… a reality. A simply beautiful book and instantly one of the most cherished in my collection… and it doesn’t hurt either that the largest section of the book is dedicated to Escape From New York, my favorite Carpenter flick and one of my all-time favorite films. I. Love. This. Book! 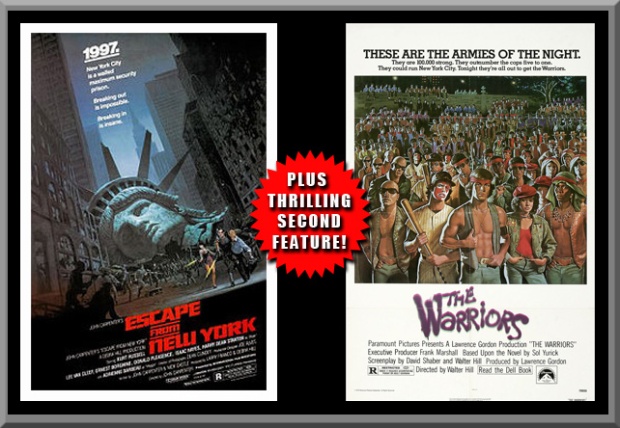 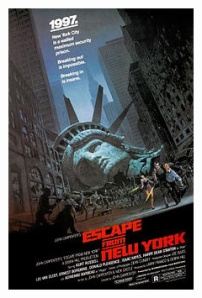 Escape From New York is one of my all time favorite B movies and a bonafide film classic. I instantly fell in love with this film upon seeing it opening night at the legendary Oritani Theater in Hackensack, N.J. and John Carpenter solidified himself as one of my favorite directors.

An outrageously original idea has New York City in a war-torn, crime-filled, future turned into a maximum security prison, and legendary director Carpenter makes it work by taking his subject matter just seriously enough to make the audience buy it. Add to that a colorful cast of characters, including one of the greatest, and sadly underused, film anti-heros of all time, Snake Plissken (Kurt Russell) and you have the recipe for a B movie classic. The story is simple, war hero turned outlaw, Snake Plissken has been captured and is about to be sentenced to life imprisonment in New York City Penitentiary. Fate intervenes and the President’s (Donald Pleasence) plane is hijacked on the way to a crucial peace summit and crashed inside the city. Former special forces soldier Plissken is the only man skilled enough to sneak in quietly and get him out alive and Snake now has a chance at a full pardon for all his crimes if he takes the job. A vicious gang leader called The Duke Of New York (Isaac Hayes) has other ideas for both The President and Snake, who has less then 24 hours to complete his mission or the world goes back to war.

Director and co-writer (with Nick Castle) Carpenter creates some nice tension and suspense and his visual eye is great at creating a gloomy hellhole out of the world’s greatest city. Dean Cundey’s cinematography is absolutely beautiful as it captures the world inside New York, which is very effectively portrayed on a small budget. Carpenter moves the film along well, although not as fast paced as today’s audience are used to, and there is plenty of action and chases to keep one entertained. Despite being released in 1981, this film may be the last film to have a real 70s feel to it before the Lethal Weapons and Die Hards changed action films forever. Another film that inspired many and was imitated many times and another great Carpenter film score to add to the atmosphere.

As for the cast… Kurt Russell does his best Clint Eastwood as Snake and it’s only natural then to pair him up with Eastwood co-star Lee Van Cleef as Police Commissioner, Bob Hauk. Rounding out the cast is Halloween vet Donald Pleasence as the President, Harry Dean Stanton as Brain, Carpenter’s then wife, Adrienne Barbeau as Maggie, Ernest Borgnine as Cabbie and legendary soul man Isaac Hayes as The Duke of New York. And not to forget, there is also genre favorite Tom Atkins as Hauk’s right hand man, Rehme and frequent Carpenter collaborator Charles Cyphers as the Secretary Of State. A simply classic B-movie sci-fi/action flick and one of my all time favorites!

MONSTERZERO NJ EXTRA TRIVIA:  The studio wanted Charles Bronson as Snake, but Carpenter fought for his choice of former Disney child actor, Russell and the rest is history. Also, the SPFX were done in part by a then unknown James Cameron, who went on to direct Terminator and Titanic. And despite it’s setting, most of the film was lensed in St. Louis and L.A. with only one night actual shooting in NYC at the Statue of Liberty.

One of the greatest B-movies of all time!

Classic 70s flick is a comic book style action film that has a street gang from Coney Island, The Warriors, framed for murdering Cyrus (Roger Hill), the charismatic leader of The Gramercy Riff, the biggest gang in the city. Cyrus has gathered representing members of all the major gangs under a truce to discuss unifying them all and taking over the entire city. Luther (David Patrick Kelly), the psychotic leader of the Rogues, shoots Cyrus and fingers the Warriors. With their leader killed for the crime, the rest of the Warriors, under war chief Swan (Michael Beck), now must fight to make their way back home with every gang in New York City out to get them, including The Rogues, who want them all dead to cover their crime. Split up and beat up, the Warriors are determined to see the sands of their Coney Island beach home.

Walter Hill creates a surreal, violent and stylish action thriller with some really colorful characters and a sumptuous neon visual style from his and David Shaber’s screenplay, based on Sol Yurick’s book. His atmosphere is also enhanced by a wonderfully hypnotic electronic score by Barry De Vorzon. The Fight scenes are top notch and the film rarely stops moving as our heroes battle their way through enemy lines encountering some very colorful adversaries such as the face painted, bat wielding, Baseball Furies. Despite the film being about The Warriors, it’s the painted faces of the Baseball Furies that would become the trademark of this last great B-movie of the 70s. This is also still, in my opinion, one of Walter Hill’s best movies. A classic film that has also been immortalized by David Patrick Kelly’s haunting taunt… (“Warriors… come out to play-ay!”)

MONSTERZERO NJ EXTRA TRIVIA: The Warriors caused an uproar upon release when some gang related violence occurred at screenings causing theaters to add security and ads for the film were temporarily removed from radio and TV. Future oscar winner Mercedes Ruehl has a small role as an undercover vice cop who arrests genre favorite James Remar as Warrior member Ajax. Star Michael Beck was quoted as saying that The Warriors opened a lot of doors for him…and then Xanadu closed them all. Personally I don’t think Megaforce helped much either. Thankfully movie fans give Beck the props and honor he is due whenever he appears at conventions and he will always be immortalized as Swan in this well revered classic.