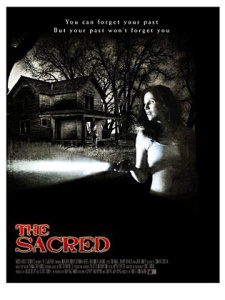 Horror flick did pass the time and had some effective moments despite a familiar story. Flick has pretty writer Jessie (Heather Roop) going alone to a recently inherited family cabin to work and not only experiencing paranormal activity but, a creepy possessed doll as well. Director Brett Donowho gives us some effective moments and some atmosphere from Carey and Shane Van Dyke’s derivative script and I liked that the film had some exploitation touches as it found numerous excuses to get the shapely Miss Roop into various and plentiful stages of undress. There is even some spooky but, enticing girl/girl action as Jessie gets supernaturally seduced by an equally sexy pair of specters. Not a very good movie in a traditional sense but, certainly found it’s ways to entertain, one way or another. Also stars B-Movie regular Jeff Fahey as the traditional creepy caretaker who knows more than he lets on. 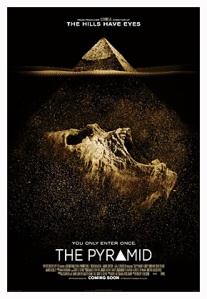 The disappointing thing about this found footage horror is it starts out pretty good with a group of explorers having found an entire pyramid buried under the sands of Egypt that pre-dates all the others. The initial journey inside is spooky and works well…till the ridiculously bad CGI critters show up and it becomes a silly SYFY Channel level monster-on-the-loose flick. It’s well directed to a degree by Grégory Levasseur and the script from Daniel Meersand and Nick Simon starts out OK, but, it just gets really silly in it’s last act and the phony creatures don’t help. Add to that the character of “Fitzie” (James Buckley) who was so annoying, you begged for his demise and you’ve got a potentially interesting horror that goes downhill steadily after a promising first act. Too bad, there was potential here for a fun flick. Also stars Ashley Hinshaw and Denis O’Hare. 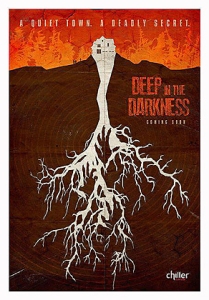 Despite some flaws, most coming in the third act, and a familiar story, this flick does manage to be entertaining. Story has city doctor Michael Cayle (Sean Patrick Thomas) uprooting his family to the rural community of Ashborough to set up his practice. Obviously, this is a secluded town with a very dark secret…one the good doctor and family may not escape. Though we’ve seen the scenario many times before with films like Children Of The Corn, Wake Wood and Jack Ketchum’s book Off Season, director Colin Theys still gives us an effective and atmospheric chiller from John Doolan’s script based on Micael Laimo’s novel. It’s only in it’s final third that things get a little out of hand, get very predictable and the plot holes show the most but, leading up to that is fairly entertaining. The production has a TV movie feel…it’s made by Chiller TV…but, the make-up FX and gore are well done. Thomas also makes a good hero, though none of the cast really make a strong impression in their roles. Also stars Dean Stockwell and Blanche Baker. 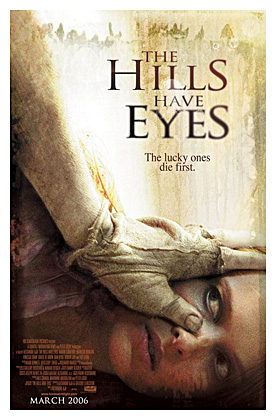 The original The Hills Have Eyes (1977) is not among my favorite Wes Craven films, but it certainly is an enjoyable, and now a touch nostalgic, survivalist horror that pitted a vacationing family against a clan of mutant cannibals in the middle of the desert. This remake basically follows the same story, but with a larger budget and cranking the intensity and brutality up to 11 by handing the writing/directing reigns to Haute Tension writer/director Alexandre Aja.

The screenplay is credited to Aja and frequent collaborator Grégory Levasseur, but it follows Craven’s original film very closely except it focuses heavier on the vicious clan being the genetic mutation result of atomic testing decades earlier and obviously, cranks up the violence and intensity which is Aja’s style. The story still follows the family of ex-cop Bob Carter (Ted Levine) who is heading out to California with his wife Ethel (Kathleen Quinlan), daughters Lynn (Vinessa Shaw) and Brenda (Emilie de Ravin), son Bobby (Dan Byrd), Lynn’s meek husband Doug (Aaron Stanford) and their infant daughter (Maisie Camilleri Preziosi). They are led astray by a gas station attendant (Tom Bower) who, unbeknownst to them, is in league with a vicious clan of cannibalistic mutants led by patriarch Jupiter (Billy Drago). Soon they find themselves stranded and their car disabled and under attack by a hungry and brutal clan that wants them all for dinner. Will this family perish in the middle of nowhere, or will they find it within themselves to meet brutal violence with brutal violence?

We all know the answer to that question and Alexandre Aja has a gory, brutal blast not only putting this average American family through a vicious ringer, but administering payback with equally violent, blood-spattering efficiency. The film is far more intense than the moderately placed original and it’s larger budget enables it to really crank up the gruesome carnage which reaches a fever pitch in the blood soaked last act. The effects by K.N.B. Effects are very well executed and now the cannibalistic clan look far more like the mutant creatures they are than the original ‘dirty hobo’ look of the 1977 version. The Craven film had some violent moments, but Aja plays it very hard-core and his backwoods mutants are far more threatening and the carnage on both sides far more graphic and with more impact. This film is a really rough ride and has a far darker edge than the original, which was quite brutal in it’s own right back in it’s time, but also had some unsettling humorous moments as well. Aja’s visual eye combined with Maxime Alexandre cinematography give the film a gritty and grungy look that serves to make one uncomfortable even when nothing is going on and when you add in the pulse pounding score from Tomandandy and François-Eudes Chanfrault, you have one intense and brutal 106 minutes that expands and improves on an original that is, in itself, considered a cult classic.

The cast all do well and play their parts very effectively from Levine’s macho ex-cop to Stanford’s mild mannered yuppie phone salesman, who slowly transforms into a man who will do anything to protect his own. Ravin and Byrd also gives strong performances as the frightened teen siblings who find not only the will to survive, but the ability to kill to do so. Drago and company all give us some truly frightening and detestable villains though, none really stand out and make an impression like fan legend Michael Berryman did in the original film that made him a horror icon. Overall, a good cast with solid performances that help add to the film’s effectiveness.

I really like this movie, if ‘like’ is the proper word to use in reference to such a brutally intense blood-bath that Aja transforms Craven’s original film into. It’s got some nail-biting action, some really intense gore, and characters that we like enough to not want to see harmed…and some we want to see get it real good! It’s one of the few remakes that improves upon the original and stands on it’s own as a horror achievement. A really good and really brutally effective horror that honors the original film it’s based on, yet makes it’s own statement. A really good horror. 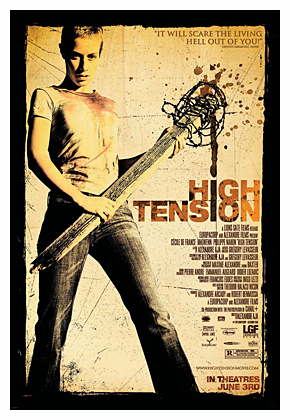 This French horror film brought director/writer Alexandre Aja to the attention of horror movie fans and an impressive first impression it is. Hight Tension or Haute Tension in it’s native French is a gruesome and intense slasher flick set during one long night of terror for two young women Marie (Cécile de France) and Alex (Maïwenn Besco) who are pursued by a mysterious and vicious killer. The film opens with the two young girls heading out to Alex’s parents’ (Andrei Finti and Oana Pellea) secluded farmhouse in the French countryside. We already know something is amiss as we cut to the family’s home and see an old beat up truck watching the house from a distance and the occupant (Philippe Nahon) seems to be getting oral sex from a woman but, it actually turns out to be a severed head which he discards when done. Once the girls arrive and settle in, the vehicle and it’s ill-intending driver returns in the dead of night and sends them on a journey into terror and murder that no one may survive. Alexandre Aja crafts a very intense and brutal thriller with some very graphic and effective kills. True to it’s name, there are moments of very intense action and suspense to go along with some very effective gore. Aja knows how to build scares and can shock even jaded horror fans with his explosions of gruesome violence. His visual style adds some nice atmosphere to it all, aided by Maxime Alexandre’s cinematography and he also gives us a horrifying juggernaut in his stocky and sadistic killer. His villain is an effective character despite not knowing much about him. All we know is he is up to murderous no-good and in blood drenched and merciless fashion. The enigma of this human monster adds a nice air of mystery to the proceedings and makes his apparently random attack all the more disturbing. The film is not perfect, Alex’s parents and little brother Tom (Marco Claudiu Pascu) are given little or no character development so, they do appear no more then simple fodder for our killer and despite the horrible things that occur to them it’s hard to be all that empathetic without a better glimpse into who they are. The script by Aja and Grégory Levasseur gives us a disturbing twist in it’s last act that, I will admit, I did not see coming but, once it is revealed, it does pose just as many questions as it answers. But, what came before is a really intense horror and even after, it remains effective, even though taking us in a different direction, and still has dramatic impact, so, we can cut Aja a little slack for trying to throw us a curve. All in all Haute Tension is a vicious and intense horror and even with it’s flaws it is still an impressive debut from the man whose re-imaginings of the horror classics The Hills Have Eyes and Piranha were equally impressive and entertaining. Also has an appearance by Maniac remake director Franck Khalfoun as a gas station convenience store clerk who gets the wrong customer.