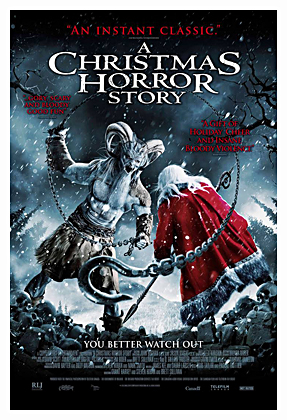 Ho ho ho-hum horror is a Yuletide-set anthology that tells four stories that take place all at the same time on Christmas Eve. One tale has a group of students investigating a campus murder, from a year before and not liking what they find. Another has a family reunion, of sorts, ending in a deadly encounter with Krampus. A third has a family going where they don’t belong, to cut down their Christmas tree and paying the price. The final tale has Santa (George Buza) himself battling his own zombified elves. The stories are loosely tied together by a DJ (William Shatner) on his Christmas Eve show.

Flick is directed with equal blandness by three filmmakers, Steven Hoban, Brett Sullivan and Grant Harvey. The script by five people, no less, has all four stories occurring at the same time and thus we cut back and forth between the four tales constantly. This gives the film a very disjointed narrative and keeps any of the individual stories from building any momentum they might have. Regardless, the direction is very by-the-numbers with only Santa’s battle with his zombie elves having much impact, thought the final moments of the Krampus story and the film’s reveal finale are somewhat effective, too…not enough, however, to save the movie as a whole. The FX and gore in the segments are actually pretty good, but the fact that none of the episodes stand out, or have any real memorable style, neuters any effect the well-done bloodshed might evoke. It’s kinda dull, when all is said and done and only the old pro Shatner gives his performance any life…and he is actually fairly restrained as Shat usually goes. As directors Hoban and Harvey have worked on the Ginger Snaps series, they set the little horror in the same town of Bailey Downs…and that’s about as interesting as this flick gets. It’s overall very forgettable, with what moments that do work being few and far between.

Not really much to recommend here. The direction is all fairly wooden and it’s disjointed narrative kills any momentum that the by-the-numbers stories might have built. The film looks good and the FX are well done, but aside from being set in the same town as the classic Ginger Snaps, there really isn’t much of interest going on in this disappointing Yuletide horror anthology.