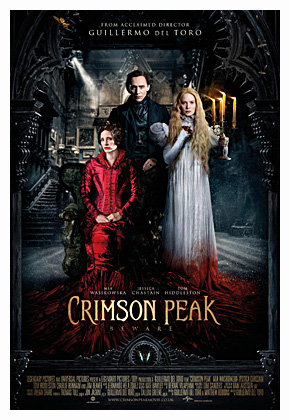 Crimson Peak is the latest film from Guillermo del Toro whose diverse resume ranges from the comic bookish Pacific Rim to the dark fantasy masterpiece Pan’s Labyrinth. It’s Masterpiece Theater meets Hammer Studios in a deliciously gothic tale of romance, mystery, murder and things that go bump in the night.

The story takes place in the 19th century with Mia Wasikowska playing aspiring American writer Edith Cushing (a homage to the legendary Peter Cushing, no doubt.) who meets and falls in love with the dashing but mysterious Sir Thomas Sharpe, who owns a massive but ancient castle in Cumbria, England. The castle is built over red clay deposits…that Sharpe hopes to mine…which seep up through the ground and stain the winter snow blood red…thus earning the land the ominous nickname Crimson Peak. Edith’s widowed father Carter (Jim Beaver) and handsome suitor Dr. Alan McMichael (Charlie Hunnam) are against this romance and Carter’s investigation into Sharpe’s past gets him murdered and sends Edith into wedlock with Sir Thomas. Now having moved into the castle with her new husband and his odd sister, Lady Lucille (Jessica Chastain), Edith begins to see ghostly apparitions that warn her all is not right. What is really going on at Crimson Peak?…what are Thomas and Lucille Sharpe hiding?…and why are ghastly spirits warning Edith to fear for her life?

Co-written with Matthew Robbins, Del Toro delivers a visually sumptuous feast saturated with gothic atmosphere. It’s a lush tale of romance, mystery and sinister goings on in a delightfully spooky castle. There are some surprisingly violent moments, especially in the blood soaked last act and a little steamy sex here and there, too. There are also spirits in this ancient structure and if Del Toro’s film has any slight disappointment it’s that, despite the ghostly presence, the film is never really scary. Sure there are some spooky moments and the specters are visually unnerving, but aside from some well executed jump scares, the film never gets as chilling as say, the hallway scene in The Devil’s Backbone. Del Toro does get some intensity going in the last act, but the film is a deliberately slow burn, though the mystery and intrigue do keep one interested till dark secrets are unearthed and the purpose of spectral apparitions revealed. It is an enjoyable film, the type they don’t make anymore and the visual design is worth the price of a ticket alone…as is the sound design. It’s just not the horror film it’s being sold as and while it does qualify as a haunted house movie, that is only a part of the overall story. Those looking for funhouse style frights may be disappointed. On the other hand, if you are looking for something with class, style, intrigue and some nasty violence to punctuate it, than this film should entertain. It’s very atmospheric and Del Toro is helped in that department by Dan Laustsen’s (Brotherhood Of The Wolf) cinematography and Fernando Velázquez’ (The Orphanage) hauntingly beautiful score. It’s a very old fashioned flick, despite the sex and violence, and one wonders if today’s audience will appreciate the Dark Shadows-esque (The show, not the goofy Tim Burton flick) tale he creates.

Del Toro’s cast is simply wonderful. Mia Wasikowska creates an idealistic woman who dreams of being a writer and has seen spectral apparitions since her mother died years earlier. She is young, though and falls in love with the charismatic Sharpe even if things don’t quite add up from the beginning. Once she is convinced something is amiss, despite her feelings, she digs deep in dangerous places to find answers. She’s a strong, smart heroine and an endearing character. Tom Hiddleston is once again engaging as the charming and mysterious baron with some very dark secrets. He conveys Sharpe’s emotional torment between his sinister agenda and the real feelings he has for Edith. A flawed and conflicted character and Hiddleston has the presence to make him intriguing and keep him from becoming a stereotypical bad guy. Jessica Chastain’s Lucille is the true villain of the piece and she is a dragon lady to be feared and reckoned with. Her secrets are dark, deep and covered in blood and the actress really gives us a villainess worthy of a classic Disney film…though one definitely not for kids. Charlie Hunnam is a suitable hero, though much of the focus is on Edith and her efforts to uncover the truth and Jim Beaver gives Edith’s father a strength and wisdom while allowing the warmth and love for his daughter to come through. A likable character for his time on screen. Del Toro regular Doug Jones also appears as various apparitions.

I really enjoyed Crimson Peak, even if it wasn’t quite the horror movie I went in expecting. It is a sumptuously filmed mystery dripping with gothic atmosphere and not afraid to splash some blood or throw a little sex into it’s old fashioned mix. There are some spooky moments and the ghosts are unnerving, it’s just not as scary a ghost story as we’d like and the ghosts are not the central focus as the marketing would have us believe. It does deliver on the mystery, murder and even romance in a style that is rarely used in today’s world of popcorn blockbusters, vulgar comedies and generic romances. It also proves once again that Guillermo del Toro is one of the most versatile storytellers around. Highly recommended, but just don’t expect the horror flick it’s being sold as.

I am a huge fan of Guillermo Del Toro and after seeing this trailer, I can’t wait to see this beautiful looking, gothic ghost story on 10/16/15!