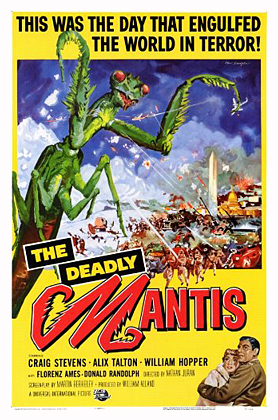 Giant insect movies were quite popular in the 50s and The Deadly Mantis is among the best. While many of the giant pests were the result of atomic testing, this six legged critter is a prehistoric insect melted out of the polar ice caps by the effects of an erupting volcano. Once free, the hungry beast snacks on military personnel and Eskimo natives on it’s way to warmer climates. The giant insect is pursued by scientists and the military as it stops for snacks in Canada, Maryland, Washington D.C. and even battles the U. S. Air Force over Newark, N.J.! This all leading to a finale confrontation in the Big Apple inside the Lincoln Tunnel (dubbed The Manhattan Tunnel for the film).

Fun flick is directed by Nathan H. Juran, who also directed classics like 20 Million Miles to Earth and The 7th Voyage of Sinbad, from a story and script by William Alland and Martin Berkeley. Juran takes the material very seriously, as does his cast, and it helps make the silly scenario very entertaining. The pace is brisk, with a lot of action, the traditional romantic sub-plot and the usual drama and humor, evenly mixed by Juran. There are some cheesy SPFX and stock footage as the military wages war on the mantis, but there is also a very impressive animatronic mantis puppet that is very effective when mixed with miniatures and given a monstrous roar by the sound FX folks. The acting is decent for this kind of movie and that helps the cheesy dialogue and silly science work well enough to keep us from laughing at the wrong times…though we nostalgically now do anyway.

This is one of the best giant bug movies from this era. A Universal picture, The Deadly Mantis takes it’s silly subject very seriously and is surprisingly well made, probably the result of being a major studio film. The cast take the material as seriously as the director and it maintains the illusion that we should be concerned about a massive prehistoric insect eating it’s way across the United States. A fun and very entertaining 50s science fiction epic. Charming cast includes, William Hopper as the handsome Dr. Ned Jackson, Craig Stevens as smooth military officer Col. Joe Parkman and Alix Talton as sexy journalist/photographer/love interest Marge Blaine.