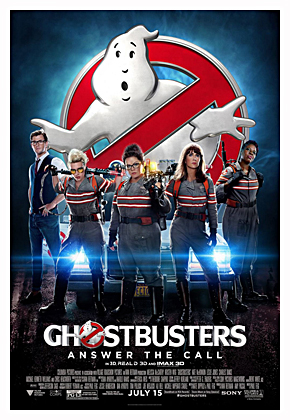 The 1984 Ghostbusters is a true classic and as this is the day and age of reboots and remakes, it was only a matter of time before this property got the rehash treatment as a sequel was stalled in development hell for years. This reworking is brought to us by Bridesmaids director Paul Feig and the only thing different about this new version is that the team are now all female. The story is very similar with scientist Dr. Erin Gilbert (Kristen Wiig) being fired from her university job due to the resurfacing of her past as a paranormal investigator. She reluctantly re-teams with her old associate Dr. Abby Yates (Melissa McCarthy) and her current partner Jillian Holtzman (Kate McKinnon) who are still in the ghost hunting business. Their timing is perfect, as NYC is suffering from an increase in paranormal activity and someone is trying to turn the Big Apple into spook central. Joining forces with street-smart MTA worker, Patty (a hilarious Leslie Jones) and their hot but dumb-as-nails secretary, Kevin (Chris “Thor” Hemsworth) they form the Ghostbusters and set out to save the city from this spectral epidemic and the villainous individual (Neil Casey) responsible.

The new Ghostbusters is nowhere near as bad as early speculation had it pegged to be, but is still a bland retread that isn’t as entertaining as it should be, considering the talent involved. The problem here is that Feig’s script, that he co-wrote with Katie Dippold, just isn’t that funny and the story is thin and un-involving. The rambunctious fun of the original film is sorely lacking and the laughs and thrills are few and far between. The new team do have a chemistry with each other and that helps, as does Leslie Jones getting all the best lines and moments and running with them. Hemsworth is also having a visibly good time playing a dolt and the updated SPFX are all very impressive. The film is weighed down, though, with simply having a weak story, including a weak villain, namely a revenge minded janitor named Rowan, who wants to unleash an apocalypse to get back at the world for being mistreated. Boo Hoo. Add in that a lot of the gags fall flat and the film’s climax lacks any real sense of urgency and we get a rather bland reboot with a few moments scattered here and there. The film also overdoes it with the 1984 Ghostbusters cameos with practically every major actor or character turning up at some point and only Slimer and Ernie Hudson’s bits actually feel like part of the film and not a “Hey, stop the movie…it’s so and so!” like most of them. The key to a good cameo is to have it feel like an organic part of the movie, Feig fails to give all but a few that feeling. One can appreciate trying to honor the 1984 flick, but here they try too hard. The film also plays it too safe and never really does it’s own thing and thus never truly reboots the series, but instead just recycles it. It really doesn’t justify it’s existence when all is said and done, even if it does have some entertaining moments.

We have a talented cast here and it’s a shame Feig doesn’t give them better material. McCarthy is showing some nice restraint like she did in St. Vincent and that is when she is most effective…if she has good material. Here she really doesn’t have much to work with. Same can be said of the brilliant Kristen Wiig who plays the straight women here and rarely gets to show her comic gifts and certainly isn’t required to give her Erin the dramatic depth she’s capable of. Kate McKinnon on the other hand, gives such a weird and off-putting performance as the apparently demented Holztman, that she just makes one uncomfortable with her mannerisms and line delivery. She would have made a far more effective villain than the bland Casey, she’s that unsettling at times. Leslie Jones is fortunate to get most of the best lines and moments in the flick and the hardest laughs were given to her antics and her fiery line delivery. She really makes her sassy MTA worker come alive and the rest of the cast needed her spark and energy. Hemsworth’s part is the thinnest, as the incredibly stupid Kevin, that the girls hire only for his looks. His character may be annoyingly clueless, but the actor seems to be having a blast playing him and it does become infectious, especially when he figures more prominently in the climactic confrontation. Rounding out is Neil Casey who is sadly underwhelming in a part that is underwritten to begin with. He makes a lame villain and not even a funny one such as the original film’s possessed Rick Moranis.

Overall, the film is not a total disaster, but not a success either. Despite a talented cast and director, the film is simply not all that funny, nor does it have the audacious fun of the film it’s rebooting. It gives it talented leads little to do with their proven skills and thankfully, at least Leslie Jones was able to make the most of the best moments of a weak script. The SPFX are impressive, but the action scenes lacked any real energy or urgency and the bad guy was all sorts of dull. The film never really dares to be it’s own thing and as an imitation of the original classic, forgot to emulate the most important part…it’s heart. Do stay through the credits, as there is some funny stuff and a post credit sequence which may imply where a sequel would head if there is one. The fact that the film was dedicated to the late Harold Ramis and he does get an amusing cameo (sort of) was a nice touch and earned a few extra points.