British/American co-production is a routine and silly slasher flick that for some reason needed three writers and three directors (Mark Ezra, George Dugdale, Peter Litten) to churn out a reasonably forgettable horror with a very generic plot.

Flick has a gang of popular high schoolers led by Carol (British babe Caroline Munro) playing not one but two mean spirited pranks on awkward chemistry nerd Marty (Simon Scuddamore). The second leaves him horribly scarred and institutionalized. Ten years later the same gang is invited to a high school reunion, only to arrive and find their former school empty and abandoned. They investigate anyway and find it indeed set up for a celebration. The reunion may actually be a trap, though, as only the members of this clique were invited to this shindig. Now someone has locked them in on the eve of April Fool’s Day and is stalking and killing the popular crowd in cruel and bloody ways. Has Marty returned for revenge after all these years…or has someone else got a grudge against those who ruled the school back in the day?

This is a very boring and routine slasher that offers nothing new to the genre. It was filmed in England and cast with English actors, while trying to pass itself off as American. Epic Fail. The actors barely hide their accents, one doesn’t try to at all, and the location has a very European look to it. The film is very jokey and silly for the most part, but then suddenly expects us to take it seriously when the murders start and the hunting down of the survivors begins by our jester-masked killer. It’s shocking this bland and style-less slasher took three people to script and direct, when it barely gives the impression that there was even one creative mind on-set. The accents aside, the acting is bad and most of the cast look like they’re pushing forty much less their late twenties. Munro was 36 at the time. There is some decent gore, but the killings are preposterous and would take a lot of work and money to set up the elaborate demises, such as pumping acid into just the right plumbing and someone drinking just the right beer. There is a lot of convenient actions by our victims to ensure they are in the right place and time to meet their ends, too. Even in a silly flick like this, it’s just too hard to swallow. When the film tries to be a bit clever in it’s final scenes, it even blows that, too. Aside from a score by Friday The 13th composer Harry Manfredini, there is little to recommend here.

Quite obviously, there is little to like about this film even with buxom bird Caroline Munro as it’s lead. The story is routine and uninspired, it has a jokey tone to it and the British actors are wooden and doing a poor job of trying to pass themselves off as Yanks. There is some good gore, but most of the kills are a bit far-fetched and hard to believe that circumstances worked out so perfectly for them to occur. Characters seem to walk into their demises…as if scripted…and it took three people to write that unimaginative script. Definitely one of the lesser and forgettable 80s slashers. Not even the nostalgia factor could boost this one. 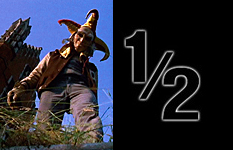