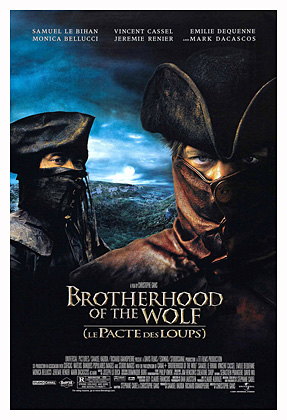 The story takes place in 18th century France in the rural provence of Gévaudan. There seems to be some sort of creature on the loose that is killing the locals and spreading fear across the land. Royal naturalist and soldier Grégoire de Fronsac (Samuel Le Bihan) has been sent along with his Native American companion Mani (Mark Dacascos) to investigate. Soon Fronsac finds himself surrounded by intrigue, conspiracy, murder, betrayal and a pair of beautiful women (Émilie Dequenne and Monica Bellucci) who could be the death of him. All this leading up to the inevitable confrontation with the “Beast of Gévaudan”.

Wildly entertaining French film is directed by Christophe Gans from an imaginative script by he and Stéphane Cabel, that is inspired by real events. It’s an enchanting dark fairy tale that blends almost every type of genre from horror to drama to fantasy to mystery to action. There are stunning visuals, sumptuous costumes and amazing scenery and sets, as Gans weaves a tale of monsters both human and otherwise. There is blood, gore, sex, breathtaking martial arts and intense intrigue, not to mention some old fashioned romance as Fronsac falls for both the feisty nobleman’s daughter Marianne de Morangias (Dequenne) and the mysterious and possibly deadly Sylvia (Bellucci). Gans presents a noble hero to root for in Fronsac, some dastardly villains, such as Marianne’s brother Jean-François (Vincent Cassel) and possibly a monster, too. The action is incredibly fast and furious, the creature sequences as intense as any horror and the romance can be both charming and sizzling depending on the content of the scene. It’s the type of entertainment they don’t make any more, a film with both an involving story and something for everyone…the only thing missing is a musical number. The cinematography, by frequent Guillermo Del Toro cinematographer, Dan Laustsen is absolutely stunning and there is a wonderfully atmospheric score by Joseph LoDuca (the original Evil Dead).

The cast is large yet all bring something to their roles from nobles to clergy to savage gypsies and brothel beauties. Le Bihan is close to perfect as the noble and heroic Fronsac. He’s a handsome and charming rogue who is also very intelligent and when needs must, a complete badass. Would love to have seen him return in another tale. Émilie Dequenne is beautiful and enchanting as the spirited Marianne. Not hard to see why Fronsac falls easily for her. Mark Dacascos creates a strong character an the Iroquois warrior/mystic Mani. He’s a bit of a mystery, soft spoken, but highly skilled in martial arts and has some great fight scenes, as well as, stealing a few scenes. The great Vincent Cassel is a very strong villain as the deranged and dangerous Jean-François. He’s a man who’s allowed inner turmoil to make him twisted and cruel. Monica Bellucci oozes sex appeal and danger as the mysterious and sexy Sylvia. Who is she really? You’ll have to watch the film to find out! There are many supporting players and characters and they all perform well.

This flick is a personal favorite and almost twenty years after first seeing it, it still entertains. The blend of action, mystery, horror and romance is spectacular, as is the sumptuous design of the sets and costumes. The cast are all close to perfect and the characters they play are endearing, charming and detestable depending on whether they be villain or hero. It’s a dazzling popcorn movie directed with loads of heart and given enough depth and intrigue in the screenplay to give it some nice substance as well. An enchanting and dark fairy tale for adults. 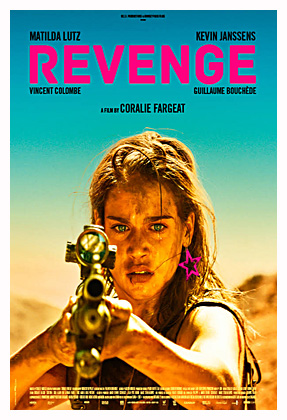 French thriller finds rich, handsome and married Richard (Kevin Janssens) spending a couple of days at his desert retreat with his pretty young lover, the vivacious Jennifer (Matilda Lutz) before a hunting trip. When his friends Stan (Vincent Colombe) and Dimitri (Guillaume Bouchède) show up a day early, they discover Richard’s little secret and Stan especially develops an attraction to the young woman. A night of partying finds Jennifer being flirtatious and friendly and Stan taking it way too seriously. With Richard away the following morning, Stan accosts and rapes Jenn while Dimitri ignores her cries for help. When Richard returns and the traumatized Jennifer threatens to tell Richard’s wife about everything, it only gets Jen pushed off a cliff and impaled on a branch. Badly injured and bleeding, Jennifer survives and when the three men come to ‘clean up their mess’, the hunters become the hunted.

Stylish and brutal thriller is directed by Coralie Fargeat from her own script. Let’s get out of the way that it is fairly preposterous that anyone could survive a fall that’s anywhere from thirty to forty feet and being impaled on a branch at it’s bottom. The trauma alone would be catastrophic, not to mention the loss of blood. If you can grant director Fargeat a little suspension of disbelief that Jennifer could survive and that her peyote-induced self surgery would heal her well enough to take on her well-armed and healthy pursuers, then you are in for an intense and blood-soaked revenge flick. It’s also one with some feminist commentary on how women are viewed. In the eyes of Richard and his buddies, Jennifer is fine as long as she’s being a sex kitten. When Stan violates her and she is distraught, suddenly it becomes an inconvenience to them that must be gotten rid of. We find that Jennifer is just a simple piece of meat to them…and it’s this arrogance and underestimation that allows a wounded Jennifer to get the upper hand and get armed herself. Coralie Fargeat is never exploitative with the material, but doesn’t ignore the exploitation elements as we do get plenty of blood spilled and Jennifer’s natural charms are not ignored either, even when transformed into a scantily clad Rambo. The rape scene is handled deftly and shows just enough to horrify and the tense and blood-drenched showdown between Jenn and Richard back at the maze of a house is riveting. On a technical level Fargeat makes great use of the desert locations and there is some stunning cinematography by Robrecht Heyvaert with a great electronic score by Rob.

The cast are all good here. Matilda Lutz is very strong as Jenn. She is a fiery and sexy young woman who transforms into a survivor and a killer when brutalized. The actress is beautiful and the film does focus on her natural attributes, but she has a smoldering intensity that makes you believe Richard and friends might have tried to kill the wrong woman. Kevin Janssens is good as Richard. He seems like a charming man, though we can’t outright like him as he is cheating on his wife. Once his perfect life is threatened, we see the true colors of a cruel and vicious person. Janssens portrays this very well and we come to dislike him extremely. Same goes for Stan who is given the perfect amount of sleaze and creepiness by actor Vincent Colombe. Stan makes us uncomfortable from the start and his horrible act on Jennifer is no surprise. When she goes on the offensive, the coward within Stan is revealed. Last but not least, Guillaume Bouchède is also good as the lazy slob that is Dimitri. At first he just seems too apathetic to do the right thing, but during the hunt he reveals a man with a cruel streak who enjoys killing. All three men are detestable and we want to see their comeuppance. Good work from the small cast.

This isn’t the first film where a woman got revenge on those who defiled her. Films like I Spit on Your Grave and Ms. 45 had women violently serving justice on wrong-doers decades ago. It’s Coralie Fargeat’s approach, that is both stylish and yet unflinchingly brutal, that keeps the story effective. There is a feminist angle in the portrayal of how little regard these men have for the young woman, as if she is just a sex toy and one to be disposed of when they are done. A type of brutish thinking we see reflected in today’s headlines all too often. Jennifer proves them wrong. Matilda Lutz is a powder keg as Jennifer and the men who abused her certainly have it coming…and we are rooting for the young woman to give them their due. An intense and blood-soaked thriller from a director to keep an eye on.