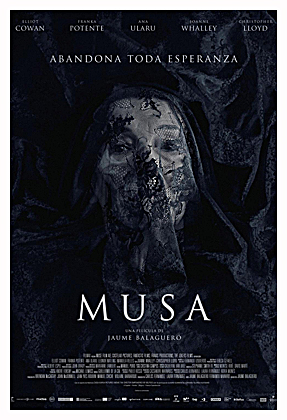 Spanish horror flick from [REC]‘s Jaume Balagueró finds Professor Samuel Solomon (Elliot Cowan) at an Irish college having an affair with one of his students (Manuela Vellés). She makes him promise to love her forever and then commits suicide in his own tub. A year later he begins to have strange dreams of the ritualistic murder of a woman (Leonor Watling) he’s never met. When the murder actually occurs, he begins to investigate with the help of Rachel (Ana Ularu), a single mother who was having the same dream. They find out about the existence of a sect, The White Circle, who believed in seven supernatural women, muses, who infiltrate our world through the words they inspire mortals to write. Members of the sect have all died and now the seven muses may be coming for Rachel and Sam.

Flick is filmed in English and directed by Jaume Balagueró from a script by he and Fernando Navarro (who ironically also co-wrote Verónica with Paco Plaza), based on a book by José Carlos Somoza. There are some very spooky moments here and some bloody ones as well. The story is a bit different with a focus on this group of seven supernaturally empowered women who manipulate things through the words and poetry they inspire writers to write…and not all of their inspirations are good. On paper, in Somoza’s book, a lot of what happens probably worked very well, especially with the pages to develop ideas and plot points. On film, though, things get a bit convoluted and some of the story elements start to feel made up as the film goes along. It is atmospheric and there are some very chilling and disturbing moments, but the story almost starts to feel it’s rambling a bit, before it comes to a conclusion that’s pretty much spelled out before the last act confrontation begins. Overall, it’s not a bad film, Just maybe not one easily translated from book to film and therefor we don’t get the full impact of the original tale, even if much of it is effectively done.

The cast is fine. Elliot Cowan tires hard as Professor Solomon, though comes across as a tad bland. His character also seems to dive right into the supernatural elements a little too easily for someone still suffering emotional trauma. Ana Ularu is sympathetic and a bit mysterious as Rachel. She will do anything to protect her son, which has her in practical slavery to the unsavory owner of a strip club. Franka Potente is solid as a close associate of Solomon who gets dragged into the supernatural drama. Flick also stars veteran Christopher Lloyd as the last remaining member of The White Circle, who is in hiding and a chilling Joanne Whalley as one of the seven ladies, Jacqueline.

This was a decent supernatural tale. It had an interesting premise, was atmospheric and had some spooky moments. Drawbacks are sometimes the film feels like the story is being made up as it goes and it gets a bit convoluted in the second half. It is based on a novel and maybe the story simply doesn’t translate that well to film. Some tales are better told on paper, despite a good filmmaker like Balagueró at the helm.

I’ll start off by saying that I do think James Wan is a good director. But Wan just seems to be making the same haunted house movie over and over again and still makes the mistake of going all theatrical in his second act when subtle was working far spookier. Sequel to Wan’s overrated hit The Conjuring starts out with real life paranormal investigators Ed and Lorraine Warren (Patrick Wilson and Vera Farmiga) investigating the famous Amityville haunting. While Lorraine suffers a horrifying vision that makes her question what she’s doing, a single mother (Francis O’Connor) and her kids in Enfield, England start to have things go bump in the night. The church asks the ghost hunting couple to travel to England to establish a validity to the Hodgson family story, while Lorraine is being haunted by a frightening specter of her own.

As with most of Wan’s horror flicks the initial set-up works well and actually has some really spooky sequences. There are some nice scares in the first hour before the Warrens travel to England, with the Enfield haunting escalating and Lorraine seeing a malevolent entity in her own home. We get to know this family very well and do start to endear to them, much like we do Ed and Lorraine. Regardless of what you think of the real Warrens’ paranormal escapades, their cinematic counterparts are likable movie characters. Visually the film is well designed, too. Wan has a good eye and choses more muted shades of blue/grey this time, where his Insidious flicks were more colorful and The Conjuring used more faded shades of brown. It suits the building mood, setting and atmosphere well. It also gives the film it’s own look, which is pretty much the only thing new here. The movie starts to run into trouble though, with simply being far too long. At 134 minutes, the flick gets very tedious and it’s middle section drags with only the occasional scare…mostly of the jump variety as Wan seems to rely more on those in the second half than the tension he built in the first half. It kills his chilling momentum as the film’s moderate pace really works against it at this point. For his climax, we again get all theatrical, cliché and over-the-top with thunder and lightening, levitations, yellow contact lenses, growling voices and the now trademarked Wan snarling demon enjoying the effects of their carnage. While we are spared an actual exorcism, we still get pretty much the same end to almost all his supernatural flicks and as with those, he looses his grip with all the mechanically paraded out tropes…twice familiar now for being used repeatedly in Wan’s films, as well as supernatural horrors in general. Like I said in my opening statement, it’s like he’s making the same movie over and over again.

One familiar element that is welcome in Wan’s films is he gets good work from his actors. The cast are really good here and help keep our interest on the story despite being routine. Wilson and Farmiga really have locked in their interpretation of the Warrens and have a good chemistry together. O’Connor is very good as the hysterical mother, though it is young Madison Wolfe who really impresses as 11 year-old Janet. She is the object of the evil presence’s attention and portrays her torment well for a kid. There is a large supporting cast, including Run Lola Run’s Franka Potente, who all do well portraying people from the actual investigation. A nice touch has pictures of the cast in character posted next to the actual individuals during the closing credits.

Much like the familiarity in Wan’s movies, my review’s for them are getting equally familiar. Once again Wan shines in the first half with some legitimate scares and thick spooky atmosphere. He then gives us a bloated middle that plods along, dissipating the atmosphere he built so well early on. He wraps it up with a very theatrical and over-the-top finale, with all the well worn tropes present…yet none of the actual scares he gave us in the more involving and chilling first half. Wan is a good director…but one whose overindulgence and adhering to the same tired formula keeps his flicks from being really special and completely satisfying.

Creep is the first feature film from British writer/director Christopher Smith (Severance, Black Death) and is a tale of horrors set in the train tunnels and sewers beneath the streets of London. The film opens with a couple of sewer workers (Vas Blackwood and Ken Campbell) discovering a new hole in one of the walls which leads to an undocumented tunnel. Their foray into this tunnel does not end well and sets the tone for what is to come. We then shift focus to pretty Kate (Franka Potente) who is planning to leave the party she is at and join a friend at another party where George Clooney is said to be going. But while waiting for the last train of the night, Kate fall asleep on the bench and when she awakens she finds herself locked inside the now shut down train station. And Kate is not alone. In the station are not only a homeless drug addict couple (Kelly Scott and Paul Rattray), but an obnoxious jerk security supervisor (Morgan Jones) and the lecherous and quite high Guy (Jeremy Sheffield) who followed her from the party. They all are about to be plunged into the same nightmare as there is someone, or something, lurking beneath the streets of London that has cruel and disturbing plans for all those unfortunate enough to be there after closing. And when Kate finds herself in the underground lair of this terrifying occupant, she realizes, to her horror, that those already dead got off easy.

I’ll be the first to admit that the talented Smith’s first flick has it problems. There are plenty of plot holes and the film does rely on some conveniences to tell it’s story such as Guy actually becoming stuck in the tunnel after closing as well in his search for Kate and the security guard basically being such a jerk that he refuses to do anything to help including calling authorities when it is clear there is something wrong going on. But Smith is a skilled filmmaker and he does still manage to make an entertaining, suspenseful and very disturbing horror film out of his flawed script. He has a visual style which makes good use out of the tunnels and underground rooms and corridors and gives us a villain whose methods and purpose are quite shocking and horrifying yet, not without a touch of sympathy. The film moves quickly once it gets going and is a tight and entertaining 81 minutes.

Smith gets good work from his cast with Potente being a strong heroine who starts out as a bit of a self-centered , superficial person who not only proves to be a fighter, but learns some humility along the way. And Sean Harris gives disturbing life to the deformed and deadly “Craig” who earns both our dread and a little of our sympathy. The film has some very gruesome moments with some very top notch gore and make-up effects and Smith even adds a touch of poetic justice/irony to it’s final frames.

The film overall shows potential for a director that has been living up to it with his more recent films which prove he not only is skilled at delivering films with a dark tone, but is fairly versatile with films ranging from the surreal, like his Triangle with Melissa George to his darkly satiric Severance to his grim medieval set Black Death. A flawed, but still very effective first feature from a director who’s proven he’s worth keeping an eye on.