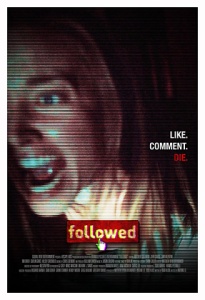 Flick has vlogger “DropTheMike” (Matthew Solomon) planning a big Halloween web-show by staying at the notoriously haunted Hotel Lennox. Not only have their been numerous suicides, mysterious deaths, and horrible murders there, over the years, but it was also home to a notorious serial killer. Mike arrives with sound girl Danni (Sam Valentine), editor Nic (Caitlin Grace) and director of photography and best friend Chris (Tim Drier). As they continue to investigate the various legends and deaths surrounding the infamous hotel, it becomes obvious that something sinister lurks within the halls and walls of the Lennox…and it has set it’s sights on Mike and crew.

Film features some uninspired direction by Antoine Le from an equally uninspired script by Todd Klick. At this point these web based horrors are getting routine and this flick is in no way a revitalization of found footage like the recent Host. Followed makes no attempt to actually make us feel like we are watching real footage, nor do we feel the people in it are anything but actors. It’s so lazy and obvious in everything it does, that there is no belief at any given moment that we are watching anything but a scripted movie, even featuring a recognizable, veteran actor, John Savage, in a small role as an author. Lead character DropTheMike is so grating and annoying that we never get behind him, or fear for him either, though at least we do feel sorry for Danni, Chris and Nic for having to put up with this arrogant, self-important clown. The FX portraying the things that go bump in the night are cheesy standard video editing tricks and one wonders why anyone would stay at a hotel with such a bad reputation, as the Lennox is still open and has many guests. At the least the location was spooky. Failed found footage film has very little to recommend here, other than it is another example of filmmakers getting their movies made and out there, as Followed enjoyed some nice success at drive-ins and theaters during the COVID19 crisis.