Cult Classic Cuties are characters from some of our favorite cult classics and midnight movies who captured our hearts and/or actresses who got our attention, but sadly never returned to these type of flicks. They’re femme fatales and final girls whose sexy stars shined only briefly, not quite achieving scream queen status. And this installment’s cutie is…

LEAH AYRES as MICHELLE in THE BURNING! 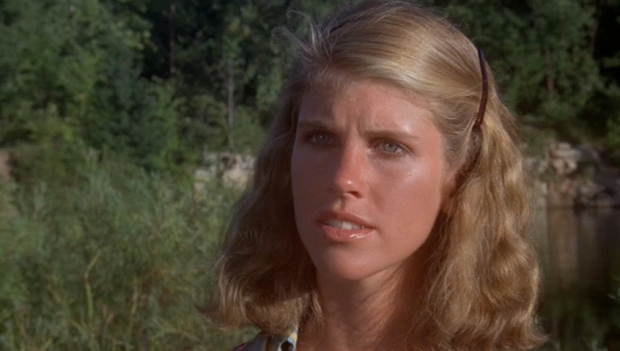 This installment of Cult Classic Cuties, goes back to it’s usual format and focuses on an actress who starred in only one horror flick in her two decade long acting career and it is a cult classic for sure! Leah Ayres worked steadily in movies and TV for almost twenty years, between 1979 and 1998, yet starred in only one horror flick, The Burning! In Tony Maylam’s summer camp set slasher, drunken camp caretaker Cropsy is pranked by some teens and when it goes horribly awry, he’s critically burned and disfigured. Five years later, Cropsy returns to the area for revenge and stalks the occupants of Camp Stonewater, where the lovely and feisty Michelle is a counselor! 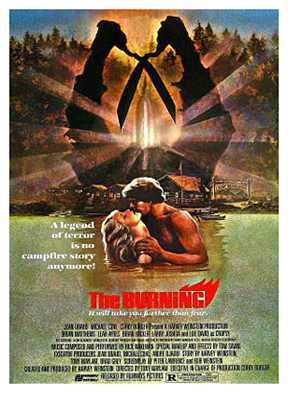 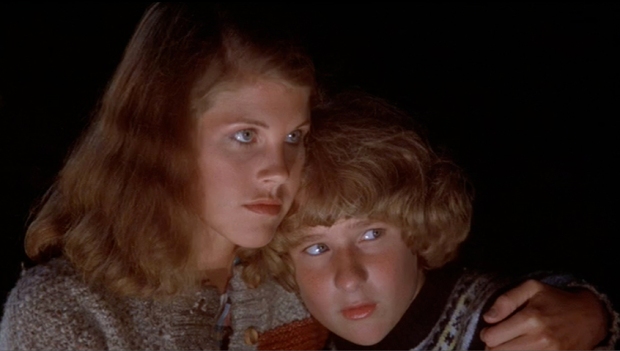 Campfire stories may prove all too true when Cropsey targets Camp Stonewater. 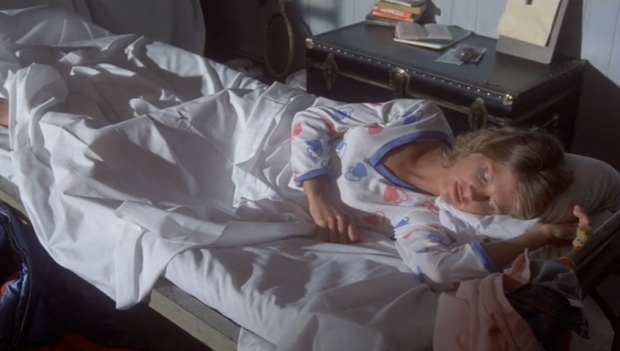 Maybe the only peaceful sleep Michelle gets after a vengeful killer stalks the camp!

Michelle gets the heads up that a killer is on the loose!

Can the brave and feisty Michelle bring help in time?

Leah Ayres, now Leah Kalish, still keeps busy with a family and working with Yoga and fitness for kids by creating health oriented videos and programing for children. We will always remember her for her feisty and brave Michelle from her one cult classic horror, The Burning! A Cult Classic Cutie for sure!

Be sure to check out our Cult Classic Cuties (click right here for the link) section to see more crush worthy ladies from cult films and midnight movies!

I have been revisiting a lot of 80s horror flicks recently, especially some of the more infamous slashers from that time so, in the spirit of my look back at one of my favorite eras of horror, I decided to make this week’s double feature a bloody fun double bill of two 1981 slasher cult classics, The Prowler and The Burning which not only both feature the traditional elements we come to expect from these movies, but both have their gory demises courtesy of master make-up FX man Tom Savini! Enjoy the bloody fun…

This 1981 slasher opens up in 1945 as soldiers are coming home from the war and we hear a young woman reading a ‘dear John’ break-up letter, intended for a boyfriend away on duty. We cut to Avalon Bay which is having it’s annual college graduation dance and a young couple leave the dance for a romantic walk. Their romance is cut short by someone dressed as a combat-ready soldier, who promptly runs the embracing couple through with a pitch fork, leaving a rose in the female victim’s hand. We then pick our story up in 1980 where the Avalon Bay Graduation Dance is being revived after having been halted 35 years earlier by the father of the murdered girl, Major Chatham (Lawrence Tierney). Someone is reviving another activity from that night, as a killer dressed in military gear descends on the partying co-eds with bayonet and pitchfork and starts leaving a bloody trail of bodies and roses behind. Can sweet Pam (Vicky Dawson) and her deputy boyfriend Mark (Christopher Goutman) stop this deranged killer, or will they join his list of victims?

Directed by Joseph Zito, who is mostly known for directing the fourth Friday The 13th flick and two of Chuck Norris’ biggest hits Missing In Action and Invasion U.S.A., this bloody slasher follows the 80s slasher format very well. We get a bunch of nubile young intended victims being stalked by an unbalanced killer with a grudge, who is dispatching them in gruesome and versatile fashion. We also get a pretty young heroine to serve as our ‘final girl’ and the doomed slutty girls who’ll show us their boobs! Zito also manages to serve up some suspense and some tension, too. He’s not the most stylish director, but his directing here is far less by-the-numbers than his Norris action flicks. And there is some decent cinematography from frequent Zito D.O.P. João Fernandes. The horror genre seems to suit Zito better than his generic action movies. The film has some atmosphere, a touch of Scooby-Doo-ish mystery and it is an entertaining 90 minutes of horror that represents the era well. It’s not perfect, we really aren’t given enough suspects, or red herrings, to make it really interesting, though when we do get the big reveal, it is still kind of a surprise. We never really get to know the victims all that well, so most of their deaths have little impact other than Tom Savini’s still effective gore FX.

In conclusion, The Prowler is still one of the better slashers of this era. Maybe not in the same league as Halloween, or the original Friday The 13th, but it is a solid enough slasher and is a fun and nostalgic sample of the type of film made in the early 80s before films like Evil Dead, Scanners, Re-Animator and A Nightmare On Elm Street took horror in new directions. A fun, gory example of what made 80s slashers fun. Extra credit for filming in my home stomping ground of New Jersey!

WARNING: this trailer does show a lot of plot elements…

The Burning is another infamous slasher of the early 80s mostly because of Tom Savini’s graphic gore effects and the problems his work caused the film when it was released. It’s release was also limited, even in the US and thus the film, especially uncut, became sought after by the horror/gore crowd. The film is also renown for being the first appearances of Holly Hunter, Jason Alexander and Fisher Stevens before they all went on to find fame in there perspective careers and it was one of the Weinstein’s first productions as Mirimax Pictures as well, before going on to become two of the biggest producers and one of the biggest companies in the business. But, does it stand up to it’s reputation? Yes and no.

The Burning starts out in 1976 at Camp Blackfoot where, in slasher era tradition, a group of campers are plotting to pull a prank on the mean and creepy caretaker named Cropsey. The prank goes terribly wrong and Cropsey is burned horribly and hospitalized. We then jump forward to 1981 where the deformed Cropsey is released from the hospital and now dressed completely in black, goes and finds a prostitute whom he promptly butchers when she becomes frightened upon seeing his face. We then arrive at Camp Stonewater which is across the lake from Camp Blackfoot, which was closed after the accident. We see that a figure dressed in black is stalking the campground carrying a pair of garden shears…wonder who that could be? Before you can say ‘Jason Voorhees’ the black clad figure is slaughtering the nubile young campers in quite gruesome fashion with his sharp garden tool. Has Cropsey returned to exact revenge for the prank gone awry and will any of the unsuspecting campers survive?

As directed by Tony Maylam, this notorious slasher flick is actually very by-the-numbers and very slow paced. After Cropsey kills the hooker, it’s almost 40 minutes before he strikes again and the film is only 90 minutes long. There is a lot of time spent with our various campers and councilors, which would be fine on a character development level if any of them were all that interesting. The characters are all fairly generic, the bully Glazer (Larry Joshua… most recognized as the sleazy wrestling event promoter in Sam Raimi’s Spider-Man), the harried nerd Alfred (Brian Backer), the wise-ass David (Jason Alexander) and the good looking counselors (Brian Matthews and Leah Ayres) who are in a relationship and too busy to notice campers are disappearing in droves till it is too late. The time spent with them before the killing starts is for the routine camp movie hi-jinx and doesn’t really help to endear us to any of them. Once Cropsey goes into kill mode with his trusty shears, it’s still fairly by-the-numbers and it’s up to make-up FX master Savini to do in young campers in gruesomely effective fashion. Most notable is a sequence on a raft where Crospey takes out half the campers in a few deft swings and chops of his favorite weapon. It’s a good scene and one that this film is famous for. Savini earned his paycheck and reputation as the gore FX are top notch. There is some atmosphere, though some of that is due to Rick Wakeman’s spooky score. The film deviates from the slasher formula a little and seems to focus on Alfred giving us a ‘final boy’ this time instead of the usual female who fights back, though he is not the only survivor, so even this classification is thin.

The cast are pretty wooden for the most part, though Alexander does give us a glimpse of what made him famous almost a decade later on Seinfeld. Backer is fine as Alfred, but he is a textbook 80s movie nerd, a role he would play to perfection in the classic Fast Times At Ridgemont High a year later. As for Ayres and Matthews, they make an attractive couple and are fine as the leads, but they never really rise above their stereotype parts. The rest are just killer fodder and/or there to show their boobs.

So, in conclusion, Tom Savini’s excellent work and the novelty of first time appearances by actors who would become famous aside, The Burning is a slow moving and paced slasher that follows the formula only to deviate slightly with the sex of it’s focal character…though, to be honest, the film never really focuses on a lead character till the last act. That and it robs us of an element of mystery and a big reveal by having our killer’s identity known from the very start. As films of this era go, it’s worth checking out and does have some 80s nostalgia added to it now, but doesn’t quite live up to it’s reputation, as much as, solidifies Savini’s. Worth a look for Savini’s contributions and to amuse one’s self at some of the acting debuts, but it’s not one of the strongest representations of it’s era. Include it as part of a double feature as we have suggested here and you can have some nostalgic fun with it along with your other flicks of choice.