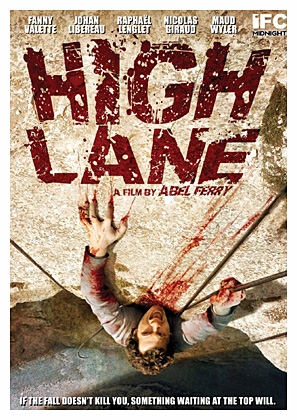 High Lane… or Vertige, in it’s native French…is a derivative horror flick that is well made and suspenseful enough to overcome the fact that basically you have seen it all before. This very intense and suspenseful French horror/thriller has a mountain climbing trip to the Balkans turning into a fight for survival for five friends who encounter more than just the natural dangers inherit in their surrounding environment. The film is structured a lot like  The Descent…even to the point of starting out with a group photo scene...with the first half basically being a tense flick about a mountain climbing trip where some mishaps turn it into a very hazardous and suspenseful climb. But as in Neil Marshall’s flick, the young climbers realize their misfortunes are not accidents and that they are actually being hunted by someone, or something, very malicious and deadly in the woods. And now the vacation becomes a gruesome nightmare in the Balkan wilderness as they now face a very dangerous and elusive adversary.

Directed by Abel Ferry, this is a very effective and suspenseful film despite being very obvious in it’s influences. It also, like the films it evokes, has some moments of very brutal violence especially in it’s last act. Though once the antagonist is revealed, the film does loose a bit of it’s mystery and veers into even more familiar territory, but makes up for it’s familiarity with a truly savage finale and using the cliches very effectively. Ferry also gets good performances out of his predominately young cast. The characters are also familiar for this type of film. We have the pretty and resourceful Karine (Maud Wyler), her arrogant boyfriend Fred (Nicholas Giraud), sweet Chloé (Fanny Valette) who is still wounded from loosing a young patient at the hospital she works at, the fearful Loïc (Johan Libéreau) who secretly crushes on Chloé and the macho, alpha male Guillaume (Raphaël Lenglet) who also has feelings for Chloé. These young actors do well though, in giving their two dimensional characters some life and personality to distance them from the stereotypes they are. There is some very well done gore and Ferry adds a savageness to the violence that makes it effective to even the most experienced horror film fan. Again, it’s clear that makers were influenced by The Descent and a few other classic horrors, but director Abel Perry really knows how to create suspense and intensity even without an original story and the film does have a few surprises or two as well. A really good example of a talented filmmaker who can take a clichéd and familiar story and make an effective and scary flick out of it despite the familiar material.

High Lane joins a host of really good horrors that have come out of France in the last decade such as Martyrs and Frontier(s). Also stars Justin Blanckaert as “Anton”! Watch in the original French language if you can as dubbing always takes away from the actors’ performances and dulls the film’s effect.