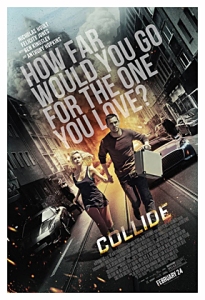 Noisy and dull action flick has Casey (Nicholas Hoult) quitting his job working for a drug dealer named Geran (Ben Kingsley) when he meets and falls for the beautiful Julliette (Felicity Jones). But when his new love needs a new kidney, Casey goes back to work and runs afoul of Geran’s rival, powerful drug lord Hagen (Anthony Hopkins). Still with me?

Boring action flick is directed by Eran Creevy from a script by he and F. Scott Frazier. Despite a good cast and a lot of fast paced car chases, the flick can’t generate much interest thanks to a weak script, too hip for it’s own good direction and more clichés than you can drive a Ferrari through. The filmmakers are more concerned with headache inducing camerawork and an obnoxiously loud soundtrack than with reigning in their actors, such as the shamelessly over-the-top Kingsley. The flick was barely interesting enough to keep one’s attention despite all the noise and wastes the new star power of Rogue One’s Felicity Jones by giving her scant little to do.