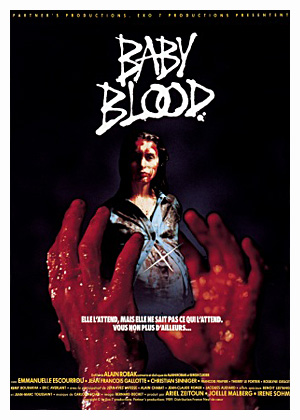 This blood-drenched French horror is one of those flicks that, when it’s over, you just stare at the ending credits, only occasionally blinking, trying to decide what the hell you just saw…and that’s not necessarily a bad thing.

Oddball flick tells the story of a parasite-like creature that has been around from the beginning of time, waiting for a chance to find a human female host and be born into a more substantial form. We know this because the creature narrates the opening scene telling us as much. It finds it’s away through an animal host to voluptuous but abused circus performer Bianca (Emmanuelle Escourrou) and climbs inside her to gestate. The creature needs human blood to grow, however and takes control of the young woman, sending her out into the world…well, France…to find and slaughter victims for their blood…and a slaughtering the reluctant Bianca does go.

Directed by Alain Robak and co-written by he and Serge Cukier, this is a loopy horror that is delightfully over-the-top with it’s gore and quite generous with nudity from the buxom Miss Escourrou. The film can be disturbingly gruesome one moment, as Bianca is beheading a victim brutally and amusingly goofy the next, as she has outright discussions/arguments with her parasitic guest…who, obviously, talks. It’s actually kinda entertaining in it’s audacity to be presenting all this very seriously as we witness a young woman turned into a savage murderess while having intense discussions with the larva-like creature that has taken over her body. It’s like a disturbing Odd Couple with Manic level gore scenes. Robak is so confident with his creation that he even has the audacity to have a poster for Blood Baby 2 appear in one of the scenes as if you could possibly follow something like this up with a sequel…which actually did happen 18 years later, so what do I know. This is definitely midnight movie material and what makes it as unnerving as it is unintentionally funny, is that the gore is really well-rendered and some of the kills are downright brutal. The last act is worth the watch alone for it’s blood-soaked birth in the back of an ambulance and the newly born creature’s attack on a bus filled with horny soccer players…yup, you read that right. It’s quite a hoot.

Basically, this is a one woman show and Emmanuelle Escourrou is quite the trooper in terms of what she is asked to perform. Bianca…as she is referred to in the subtitles, though the credits list her as “Yanka”…gets drenched in blood quite often, and sometimes while wearing little or no clothes. Escourrou handles the carnage…and prolonged nudity…quite well, just as she plays her conversations with the parasitic tenant in her womb with equal seriousness. The actress makes an impression considering just how ridiculous it all is and how seriously she takes her part.

I had a fun time with this bizarre French horror. From it’s creature talking from the womb, to the frequent scenes that erupt into blood baths, this is an entertaining midnight movie that has the balls to take itself very seriously. It’s a ‘so bad it’s good’ fun time and definitely a treat for those who like gore films, foreign horror and cult classics. Worth a look for those who like a little lunacy with their entrails. Spawned a sequel almost 20 years later titled Lady Blood that returned Emmanuelle Escourrou to her role.