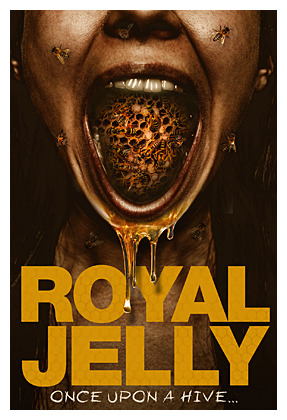 Film tells the story of outcast high schooler and avid bee keeper Aster (Elizabeth McCoy). Aster is not happy living with her stepmother (Fiona McQuinn) and half-sister Drew (Raylen Ladner) and the feeling is mutual. Things start to pick up when new teacher Tresa (Sherry Lattanz) shows interest in Aster and shares her love of bee keeping. When Drew and her friends destroy Aster’s hives, she runs away and Tresa takes her in. But Tresa is not who she seems and she may have sinister plans for Aster.

Written and directed by Sean Riley, this low budget film does get credit for trying to do something different, even if the flick misses the mark. Royal Jelly is a slow burn and has a few creepy moments, but drops the ball when it makes it’s big reveal and it’s attempt to turn into a body horror in the last minutes become downright laughable, with some awful make-up FX. The plot that Tresa is trying to make humans become bee-like is bee-wildering and silly anyway, with Aster, naturally. to be transformed into the hive queen. Still, it does pay homage to it’s influences and at least had the originality to not include zombies or an exorcism. Available to rent now on VOD.