Although credits claim it is actually written and directed by The Wachowski’s (The Matrix), watching this colorful mess implies they were simply making it up as they went along. The plot, if there really is one, is vaguely about a young Earth woman, with the porno name of Jupiter Jones (Mila Kunis), who is actually alien royalty and being hunted by her mumbling rival, Balem (a horrible Eddie Redmayne) and protected by alien warrior, Caine (a blonde Channing Tatum in hilarious elf ears). The film is tedious, talky and very hard to follow, though, when there is action, it is spectacularly done. The FX are really well orchestrated, too, but used to such ridiculous ends at times, it’s hard to remain impressed by them. Simply an overambitious mess with Redmayne being possibly one of the worst villains in movies history.

Written by Matthew Holt and directed by Michael Axelgaard, this British found footage flick has an interesting concept, but is a slow moving bore. The film entails a trip by two couples (Sam Stockman , Emily Plumtree, Matt Stokoe and Jessica Ellerby) to a remote farmhouse near an old tree with a bizarre history. It is said that for centuries, couples have been found hanging from the tree and that there is an evil lurking in the ruins nearby. So of course, this is the perfect vacation spot! Obviously, one of the vacationers is a camera-phile and everything is being recorded. And what they capture is a lot of dull exposition and couple bickering till the film actually decides to become a horror movie in the last 10 minutes. A snoozer with one or two creepy moments at best. At least the British birds were cute. 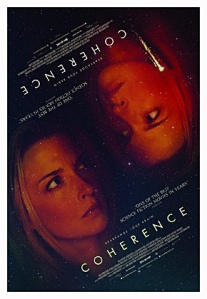 Written and directed by James Ward Byrkit, this 90 minutes of pretentious drivel tries to stretch a Twilight Zone plot into a full length movie. Film has a bunch of yuppie hipsters getting together for wine and cheese and self-important conversation when a comet passes over and they soon find out that there are duplicates of their house and themselves all over the block. What we then get is a bunch of quantum physics techno-babble and then fearful panic. For a bunch of science-minded, supposed intellectuals, they then begin to do some stupid stuff. It all adds up to a lot of boring talk and a very shallow attempt at doing what Dennis Illadis’ +1 did a lot better. Stars Buffy The Vampire Slayer’s Nicholas Brendon in an annoying role as the least helpful of the bunch. 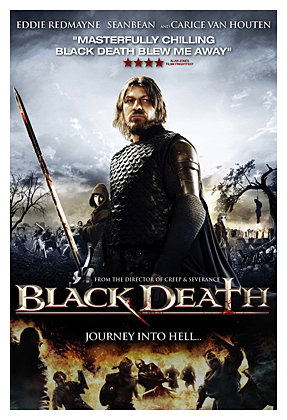 Black Death is a horror/thriller set in 1348 during the Black Plague. The land is being ravaged and the clergy say it is a pestilence from God as punishment for man’s sins. The film follows the story of young monk Osmund (Eddie Redmayne) who has fallen for a pretty young woman (Kimberley Nixon) and has sent her deep into the woods to take sanctuary from the sickness. Osmund prays to find a way to escape the monastery and join her and sees an opportunity to do exactly that when a group of soldiers, headed by veteran knight Ulric (Sean Bean), needs a holy man to guide them to a remote village near where his Averill has fled. But it is a village said to be ruled by a necromancer and for practicing witchcraft and the knights are tasked with the necromancer’s capture. Osmund accompanies the knights, but his young love is nowhere to be found and once they arrive in the village, they do discover a seemingly peaceful sanctuary free of the plague and the chaos it creates. But looks can be deceiving and Osmund and the knights find this place may actually be more Hell than Eden and a Hell they may not escape from.

Brit director Christopher Smith (Creep, Severance,Triangle) uses his setting of the Black Plague to maintain an atmosphere of dread even before we reach the village and then amplifies it by letting us know there is something not right about this seemingly idyllic place as soon as we arrive. It’s not soon after that the true nature of the village is revealed and Smith then uses his tale, written by Dario Poloni, to ask cynical questions about religion and the misuse of the power of belief by the people who claim to support those beliefs. Are they representing their deities or serving their own whims of power and control? And the best part is that Smith keeps the questions subtle enough so not to disrupt the entertainment. It is a movie after all and good one that keeps the audience on the edge as to whether the evils are supernatural or all too human.

Smith commands a good cast, including the always top notch Sean Bean, who helps Smith make this dark tale work. The contrast between the cynical soldiers and naive monk give it weight. Things then get interesting when we add the villagers…led by Tim McInnerny as the charismatic leader Hob and Carice van Houten as Langiva, a mysterious woman who may have unnatural powers…who evoke thoughts of more contemporary stories such as Jonestown and the events at Waco. Extra props to young Eddie Redmayne for effecting the gradual transformation of the monk Osmund from naive young monk to…well, you’ll have to watch to find out.

The pace is moderate and that serves the story and it is a gloomy tale and Smith doesn’t shy away from it’s dark nature or wrap things up in a pretty bow once the credits roll. Black Death is not only a tale of atmosphere and mystery, but it is a very graphic and violent tale. All the more effective as Smith doesn’t overuse his blood and gore, but only when it’s needed to punctuate a scene and add impact where the story needs some added intensity.

A good flick from a talented director who mixes an entertaining and chilling story with a little food for thought about faith, belief and those who would use it for their own devices. A dark but satisfying horror from a filmmaker with an already diverse filmography.

3 Beans on a hooded horse… just go with it…