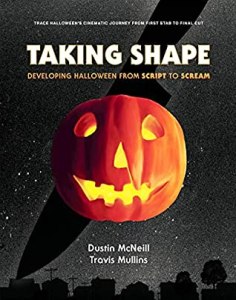 by DUSTIN McNEILL and TRAVIS MULLINS

Taking Shape: Developing Halloween From Script To Scream was a really fun and informative read that is a must for any fan of the Halloween film franchise. Dustin McNeill and Travis Mullins use a host of interviews and quotes from a variety of people involved in the productions, from John Carpenter’s original classic to Rob Zombies re-imaginings to the newest installment released in 2018. We get script and story development on all the films, accounts of the production shoots, unmade script details and sometimes tales of development hell, scarier than the films themselves, when attempted sequels fell victim to artistic differences and studio interference. It’s a fast and fun read and one that gives a detailed account of the making of one of horror’s most renown series from many of those who were involved. A recommended read for anyone who is a fan of this classic franchise, or horror movies and filmmaking in general. 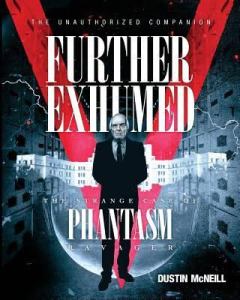 Sequel book to Phantasm Exhumed tells the indeed strange tale of how Phantasm: Ravager first started out as a Reggie (Reggie Bannister) centric web series that grew over a course of eight years into the final chapter(?) of the Phantasm film series. It’s an interesting book, although at times it does feel like there is some filler in getting this chronicle to it’s 160+ page length. The first quarter of the book is a repeat of material from Phantasm Exhumed concerning Phantasm: Ravager and then we finally get the start of the story of how Don Coscarelli and new series director David Hartman, began what started as a web series in 2008. Then it details how the footage for the intended Reggie’s Tales was integrated into and became part of the story for Phantasm: Ravager. A film that would take another eight years till release. We get details of the release and reception and then McNeill goes into a lengthy analysis of the film itself. It is here that the material feels mostly like filler, as it is basically the author trying to give a lengthy counterpoint to those negatively criticizing the film. It is still an interesting book, but one that struggles hard to be feature book length, ironically, much like Phantasm: Ravager itself being pieced together from an episodic web series. Still worth having if you are a “Phan.” 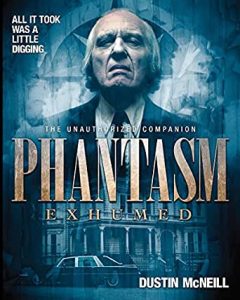 Book is a fun and informative love letter to one of the most beloved horror franchises of all time, Phantasm! It traces Don Coscarelli’s entry into filmmaking with his first features, before beginning a look back at the making of the original, classic Phantasm film, with a host of stories, anecdotes and pictures from many of the cast and crew. McNeill then discusses the erratic and sometimes lengthy periods of time between each sequel and the making of those sequel themselves. It’s a fascinating look at low budget filmmaking and big studio interference, such as the replacing of series regular A. Michael Baldwin with James LeGros in Phantasm II. There are even shared entries from the personal journal of The Tall Man himself, Angus Scrimm! The author ends his tale right as the rumblings began for the fifth and final (?) entry Phantasm: Ravager…but that is another story and book! Overall, it’s an entertaining and in-depth look at the making of this legendary film series and of the passion of it’s creator in getting his movies made. A must have for fans…or should I say Phans!