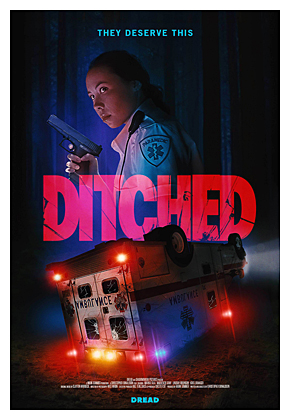 Flick finds a dangerous prisoner transfer crashing in the middle of nowhere stranding EMT Melina (Marika Sila) in the middle of the woods with her surviving crew members, two police officers and a pair of psychotic killers. Their homicidal passengers are the least of her worries, though, as there is something else in the woods stalking them that is far more dangerous.

Written and directed by Christopher Donaldson, this horror starts out spooky and effective, until we get our reveal. Once that happens it becomes a long, drawn-out villain pontification showcase that stops any momentum the film had, dead in its tracks. What started out being something headed in a bloody fun direction, nosedives into a tedious talk fest by a boring, boastful villain (Mackenzie Gray). It was much more interesting when the threat was left in mystery and shadows. The plot also gets far too convoluted for its own good once the nefarious plot is tediously revealed. The action finally does resume, with about ten minutes left in the movie, but by then it’s too little and far too late. There is some abundant and well-orchestrated gore, but the film way overuses the 80s neon lighting style that has become popular again with a new generation of filmmakers weaned on the films of that era. At least Marika Sila made a solid heroine, who was sadly in need of a better movie. A disappointing example of a film that starts out headed in a good direction and takes a wrong turn into boring and forgettable.

Dread is a dark film that surprises by having deeper things going on than the deceiving coming attractions would have us believe. It’s a simple but gruesome tale, of college students doing a study on fear…and what could possibly go wrong with that?

The film, written and directed by Anthony DiBlasi (Extremity, Last Shift), from a story by Clive Barker, is actually well made and tries to accomplish something beyond just portraying unpleasantness and pain. DiBlasi gives his sometimes cruel and brutal film, some depth and emotional resonance. That’s the difference between this and the recent trend of torture horror. The violence in the last act is part of the downward spiral the story slowly makes and is not done for it’s own sake, or to outdo the last torture themed flick. It’s not the subject of the film, but an unfortunate result of a character’s unraveling. There are cruel moments, but they are brief and have impact. We feel horrified for the victims, not numbed, as they are people and not just subjects for some SPFX team’s expertise. Not an enjoyable film, on an entertainment level, but an interesting one that was released as part of the After Dark Horrorfest and produced by Barker himself. Stars Jackson Rathbone, Shaun Evans and Hanne Steen, who all perform the material well.