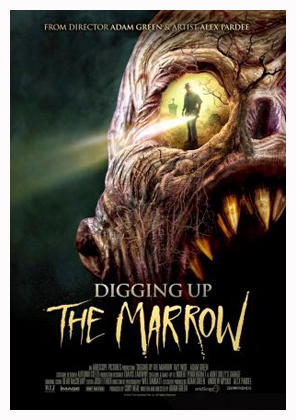 Adam (Hatchet) Green wrote, directed and stars as himself in this faux documentary about a man named William Dekker (a terrific Ray Wise), an ex-cop who contacts the filmmaker about documenting his discovery…that monsters are real. Dekker claims that not only are monsters real, but he has found where they live, in a subterranean ‘metropolis’ he calls The Marrow. Green and his cameraman Will (Will Barratt) interview Dekker and follow him to the graveyard entrance to this underground world to try to catch footage of one of these alleged creatures. While they have every reason to doubt Dekker and his sanity, they may also have good reason to believe him, too.

Green’s flick is entertaining enough, but never really grabs hold of you even in the last act when things finally start to ‘surface’. The interview footage is fun, due to a really great performance by Ray Wise as Dekker and Green himself has a good time as the filmmaker gets drawn into Dekker’s story while everyone around him has doubts. And while I do consider this somewhat of a vanity piece, obviously for Adam Green playing Adam Green, at least he has the humility to amusingly poke fun at himself by being the absolute last of a long list of famous horror directors that Dekker has attempted to contact. The film, which evokes Nightbreed in spots, does get a little spooky as we follow the three into the cemetery and start monster hunting. We do get to see some well-designed critters by Alex Pardee, once things finally get rolling, though, far too few than expected from the build-up. There are also some fun cameos such as Kane Hodder and Tom Holland, but I just felt that the film really doesn’t make optimum use of it’s premise and could have been far spookier than it goes for. The ending in particular is intriguing, but could have been far more effective and it also leaves some plot points open…such as the implications that Dekker has a personal interest in what may live inside The Marrow. Oh…and if Dekker does have a personal attachment to something that lurks there, why threaten to expose it by having a renown filmmaker document it’s existence at all? Such questions leave one a bit unsatisfied once the credits roll.

Overall, I’d say the film is certainly worth a look and definitely is fun. It just never really gets going enough to completely draw us in and the spooky stuff is few and far between. We do get a few interesting monsters, but not enough considering what the build up implied we might discover. Not a great flick, but an amusing 90 minutes, though, in my opinion, another example of how Green’s love for movies far surpasses how effectively that love translates to screen in his own projects. He has yet to really grab me with one of his films.