You Might Be The Killer gives us a fun, meta twist on the traditional camp set horror!

Memorial Day Weekend 🇺🇸 is here and that means the start to the summer vacation season!…It also means camping, barbecuing, swimming, cabins in the woods, summer camp and maniacs in hockey masks! Halloween isn’t the only time of the year when things go bump in the night, as these 25 fright flicks prove! (…and no, I didn’t forget the cabin set Evil Dead films, they take place in the fall!)

Desolation is a small but sometimes intense little movie about three people being pursued by a mysterious figure while camping in the woods. Pretty, young widow Abby (Jaimi Paige) hikes deep into the mountains with her son Sam (Toby Nichols) and her friend Jen (Alyshia Ochse). They are there to lay to rest the ashes of Abby’s late husband and soon find themselves being followed by a creepy hiker (Claude Duhamel) who may have ill intent for the three.

Disturbing thriller is directed by Sam Patton from a script by Matt Anderson and Michael Larson-Kangas. It gives us a little time to get to know Abby, Sam and Jen and what emotional state they are in, before they start to realize there is someone trailing them as they hike into the mountains and camp. The chills from director Patton start off slowly as the hiker sits quietly staring from a distance, before turning the screws when he brutally let’s us know, what we suspected all along, that this hiker is up to no good. Then it’s a last act struggle to survive with a savage killer in pursuit. Granted this isn’t something new story-wise, with innocents in the middle of nowhere under siege by a deadly attacker. It’s in the telling that the story picks up it’s intensity as Patton has introduced us to three likable characters, two of which who are emotionally vulnerable at the moment. All the more reason to fear for them as their pursuer moves in and reveals his violent and cruel intentions. We may have an idea as to how this will all play out, but it is effective none the less…brutally effective at times. And at only 78 minutes, it is a tight little movie that certainly doesn’t overstay it’s welcome.

The minimal cast all perform well. Jaimi Paige presents a sweet but wounded woman in widowed mom Abby. She’s trying to remain strong and be supportive of her son and we sympathize with her. Paige gives her a down to earth quality that really makes her endearing. Same could be said for Alyshia Ochse as her best friend, Jen. Jen is also a sweet and playful girl-next-door type and she and Paige have a good on-screen chemistry. They are very convincing as friends and their concern for each other, both before and after the hitchhiker makes his presence known, seems sincere. Toby Nichols does a solid job portraying a young boy coping with the death of a parent and then trying to be strong for his mother when they come under attack. A good performance from the young man where he has to convey a wealth of different emotions. Finally, Claude Duhamel imbues his silent hitchhiker with some nice malevolence, using just his body language and facial expressions to convey this guy is not right. Even before he gets violent, we are uncomfortable for our trio when he is around. The film also leaves the aspects of his motivations ambiguous, with enough gruesome clues to form our own conclusions.

An original movie?…No. A well done telling of a familiar tale…quite! Sam Patton keeps the film small and intimate, gives his audience time to get to know and endear to his main characters and then slowly allows his creepy stalker to get closer and closer to our vulnerable trio. He waits sometime for things to get really vicious and then it becomes a brutal struggle to survive against an enigmatic and highly disturbed individual. A good cast and some nice New York State locations help make this a solid survival thriller and a good start to Sam Patton’s feature film resume. 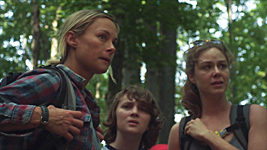