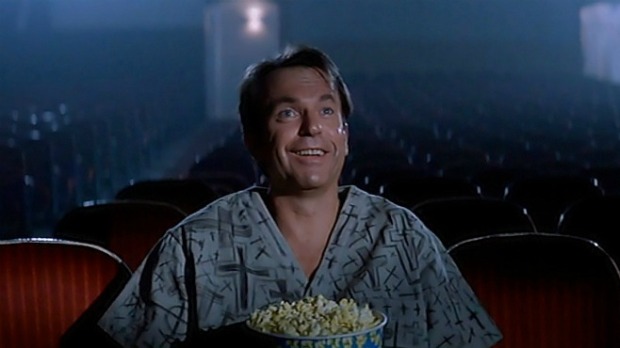 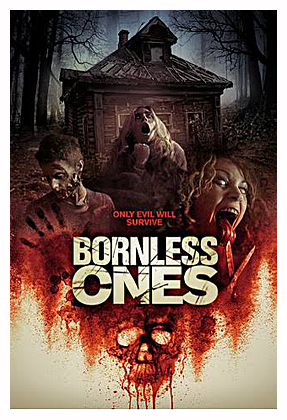 At it’s core, flick is a basically an Evil Dead (both old and new) retread with a group of people in an isolated cabin and an ancient evil taking them one by one. This cabin in the woods horror has pretty Emily (Margaret Judson) moving into a remote house/cabin so she can be near her brother Zack (Michael Johnston), who she is going to send to a nearby institution for his spastic monoplegia, a form of cerebral palsy. Her boyfriend Jesse (Devin Goodsell) is with her and their friends Woodrow (Mark Furze) and Michelle (Bobby T) have come along to help set things up. When they enter the house…which they apparently bought sight unseen…they find evidence some kind of cult ceremony or witchcraft was performed there previously. When they remove some creepy symbol adorned boards, something malevolent moves into the house with them. It first possesses poor Zack, who can now walk and talk…saying scary things, of course…and makes it known that they all shall fall prey to The Bornless. Sound familiar?

Flick is written and directed by Alexander Babaev with very little originality or novel additions to the cabin in the woods sub-genre. Zack’s affliction is one of the scant few original wrinkles and with it does come an interesting element that the demons healed him somewhat to use him more efficiently and there is evidence that this healing power is what provoked the original owner to invoke them. This is, however, for the most part, a retread of a classic using elements from it and it’s remake, thought sometimes effectively and I can’t say it wasn’t somewhat entertaining. Babaev may have little originality in his screenplay, but it’s atmospheric and he does direct some of the zombie/possession scenes well. He also has a good visual eye, too and there are some amusing bits where possessed cabin mates reveal their host’s darkest secrets just to be nasty and where some are visited by ‘spirits’ from their past to taunt them. There is some decent and effective gore, but unfortunately the “bornless” demon spirits are represented by some cheesy CGI and aren’t nearly as effective. The one time Babaev tries to deviate and actually show his demons, is a time he should have taken a cue from Raimi and let our imaginations do the work instead. Sometimes less is more. Thankfully they don’t have all that much screen time.

Cast are all fine. Margaret Judson makes a solid heroine. She nicely conveyed her character’s concern and affection for her illness inflicted brother and that makes her Emily endearing. She also turns into a resilient fighter once things start going bump in the night and proves to be effective final girl material. Michael Johnston was good as Zack. He at first has to emote with very little due to Zack’s condition and then gets to have a little fun once he is possessed and becomes fully functional. He has some creepy moments once things get going. Goodsell is fine as boyfriend Jesse whose deeper secrets and feelings are brought to the surface by the demonic presence and he’s not the person he pretends to be, though that’s not all that much of a surprise. Furze and Bobby T are also efficient as the friends who have secrets of their own and wind up not having a good time at the cabin…if you know what I mean.

I can’t give this flick much credit for originality, as it borrows far more from Evil Dead both past and present than it comes up with on it’s own. There are a few original ideas and they do work, but instead writer/director Alexander Babaev seems content to replay a lot from Raimi’s classic and Alvarez’s remake. It’s a shame. He does show some chops with some effective scenes and some nice atmosphere. A compassionate and strong heroine played by Margaret Judson also helps keep this from being a dull retread and the cast, overall, are fine in their roles. There is some nice gore and the cabin setting works well despite being so blatantly familiar. Ultimately, it’s definitely worth a look and was entertaining, but expect extreme amounts of Evil Dead envy.