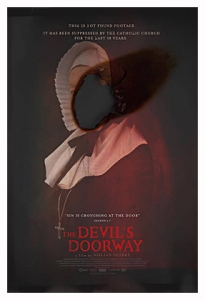 Found footage flick takes place in 1960 and is supposed to be film footage shot by two priests, Father Thomas (Lalor Roddy) and Father John (Ciaran Flynn) as they investigate the reported bleeding eyes of a Virgin Mary statue. The statue stands in an Irish Magdalene laundry which were basically homes for wayward women cast out by society. Once the priests start to investigate, they find the statue is the least of their problems as there is true evil in this place both human and supernatural in origin.

Aside from it’s intriguing setting, there is nothing all that original in this flick, as either a found footage film or a demonic thriller. Director Aislinn Clarke makes atmospheric use of her locations, including some creepy rooms and catacombs beneath the building, but fails to set anything all that involving within them. Her script, that she wrote along with Martin Brennan and Micheal B. Jackson, drags out every cliché imaginable in the found footage and demonic possession genres from the shaky cams and conveniently failing lights to the laughter of spectral children and levitating young women in nightgowns. The last act down in the subterranean catacombs beneath the building were right out of As Above, So Below and the sticks used for demonic symbols, right out of Blair Witch. Roddy’s Father Thomas was an interesting character and there was a creepy twist involving his past and Helena Bereen‘s Mother Superior was spooky without the last act reveals. It’s just the film seems to be simply a mash-up of elements and scenes from other movies and not done interesting enough to freshen them up or give the filmmakers a break. There is some feminist commentary mixed in, but it doesn’t make up for all the under-cooked horror elements that we’ve seen so many times before. There is some spooky and disturbing stuff in the last act, but it’s too little, too late and too familiar to elevate the film, even with a brief 76 minutes run-time.

Spanish horror flick from [REC]‘s Paco Plaza takes place in 1991 and is based on a real police report. The story opens with a frantic 911 call and police arriving at an apartment to find something horrible has occured. We then go back a few days to find teen Verónica (Sandra Escacena) conducting a seance at school during a total eclipse to talk to her dead father. Something goes wrong and now a dark spirit follows her home and preys on her and her three siblings (Bruna González, Claudia Placer and Iván Chavero). Can Verónica protect her little brother and sisters from this malevolent entity and what did police find on that fateful night?

Directed by Plaza from a script by he and Fernando Navarro, there is nothing new here story-wise, even if based on a real-life incident. All the demonic haunting clichés are present, but it’s how Plaza uses them that still makes this an effective flick. The director takes some very familiar tropes and uses them to spooky effect as he tells this tale of a teen being stalked by a very vicious spirit will ill intent. He separates the kids from their widowed mom (Ana Torrent) having her working all day and night at the family owned business, thus leaving the children without guidance and protection, save for Verónica…who has no clue what to do. She turns to the creepy blind nun (Consuelo Trujillo) at school for help and while this character is also a cliché, she is a spooky sister and provides some ominous exposition to the terrified teen. Again, the tropes work. We get some some really effective use out of shadow figures, gross stains, nightmare sequences and moving objects and it’s a sign of a talented director that some very familiar stuff, still gives us the creeps. The climactic posting of the actual police report and events that followed also leaves us with a chill. Add to that a spooky score by Chucky Namanera and we have a creepy little flick despite having seen pretty much everything before.

The cast is good, especially lead Sandra Escacena as Verónica. She plays a teen interested in the occult and seeing it as a way to talk to the father she misses. She also portrays well the fear of a teen whose made a dire mistake and now must try to correct it and protect her family, even if no one believes her. Bruna González, Claudia Placer and little Iván Chavero are cute as her little siblings and each get to act in some spooky sequences and do so, well. Consuelo Trujillo is very creepy as the blind nun dubbed “Sister Death” by the Catholic school’s students and Ana Torrent is solid as the mother who works till exhaustion, though still cares about her kids. She’s the skeptic in the scenario and just thinks this is just a byproduct of Verónica spending too much time with her supernatural hobby. This isolates the teen emotionally, weakening her for the entity.

This was a completely unoriginal flick, even if supposedly based on fact, but also a good example of how a talented director can still make an effective chiller out of oft used material. The story has been done before, the tropes are nothing new, but this is still a spooky flick with a good cast to make the characters likable and sympathetic. As his resume shows, Plaza can do spooky and with this tale of a teen haunted by a demonic entity, he does just that. Recommended especially if you are a fan of supernatural chillers and like the familiar trappings.