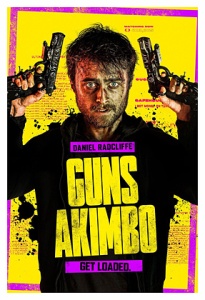 Computer programmer Miles Lee Harris (Daniel Radcliffe) is having a very bad day. He’s broken up with his comic book artist girlfriend, Nova (Natasha Liu Bordizzo) and picked a fight with the wrong website. Miles decides to have a little fun on the website for Skizm, a live action fight club where they pit various psychopaths against each other in real life battles to the death. When he trolls the site, he finds himself knocked out by a gang of thugs and wakes up the next morning with guns bolted to his hands. The man who runs Skizm, Riktor (Ned Dennehy) informs the mild-mannered Miles that he has 24 hours to kill Skizm’s leading psycho killer Nix (Samara Weaving) or he and the kidnapped Nova will die…all part of Skizm’s latest webisode!

Flick is written and directed by Jason Lei Howden (Deathgasm) and seems more attuned to today’s gaming and web-centric audience. They would probably appreciate more all the gaming nods and references, though it’s still fun as a humor-laced, action/comedy for the pre-Xbox, pre-Youtube set, too. It has plenty of violence, action and bloodshed, as poor wimpy Miles is trying just to stay alive, much less kill his overzealous opponent. He is both cheered and booed by the audience streaming it all, as the online veiwwership takes either the side of the hapless nerd, now nicknamed Guns Akimbo, or the blood-thirsty Nix. Radcliffe is well cast as the nerdy, terrified Miles, as is Samara Weaving who is delightfully over-the-top as the tattooed, weapons loving Nix. She’s become quite the fixture in bonkers flicks like this, Mayhem and Ready or Not that delight in mixing extreme violence with a twisted sense of humor. It’s no spoiler that at some point Nix and Miles will find common ground to take on the bad guys in an amusing blood bath of a finale. Not quite as consistently fun or funny as Howden’s Death Metalheads vs zombies flick Deathgasm, but colorful and blood-spattered enough to amuse for it’s economical 95 minute length. 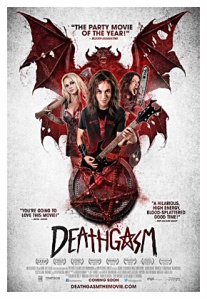 New Zealand horror/comedy is written and directed by Jason Lei Howden and tells the story of outcast and death metal-head, Brodie (Milo Cawthorne), who is forced to live with his straight-laced uncle and family after his mom is arrested. He meets rebellious Zakk (James Blake) and together they form the death metal band Deathgasm. A chance encounter with reclusive, former death metal star Rikki Daggers (Stephen Ure) puts them in possession of the Black Hymn, a piece of music that can summon the king of all demons. They play the song and all hell breaks loose…literally. Now can Brodie and Zakk undo the nightmare they have unleashed?

Sure, this flick appears to be written by and for fourteen year-old metal-heads, but that’s not necessarily a bad thing. There are some legitimate laughs and a delirious amount of giddy and well-orcestrated gore, as our metal-heads battle a town full of demon possessed zombies while trying to figure out how to stop the king of demons from rising. There are some slow moments and it is all very silly, but there are some clever bits, too and some, just raunchy enough and bloody enough to elicit continual chuckles…such as a scene were Zakk and Brodie battle demons with dildos, vibrators and butt-plugs…yes, you read that right. Maybe not a classic, but it is fun and certainly has some memorable moments. A death metal Spinal Tap meets Dead Alive, if I were to paraphrase…and while it’s not quite as good as those flicks, it has it’s black heart in the right place. Also stars Kimberley Crossman as the apple of Brodie’s guy-liner adorned eye, Medina.