DC Comics based flick is an awful and tedious disappointment that makes the flawed Batman v Superman look like a masterpiece in comparison. The mess of a story has a ruthless government official (Viola Davis) planning to put a squad of imprisoned bad guys together as a black ops deterrent to the rising number of meta-humans showing up in the world. This group, including assassin Deadshot (Will Smith), thief Captain Boomerang (Jai Courtney) and the Joker’s (Jared Leto) main squeeze, Harley Quinn (Margot Robbie), is coerced into action via explosive devices injected in their necks a la Escape From New York. They get a chance for action when a powerful witch named Enchantress (Cara Delevingne) revives her equally powerful CGI brother and begins to build a weapon to destroy all mankind. The team reluctantly sets out to save the world that hates them and imprisoned them.

The flick’s mess of a script is written by David Ayer (writer and director of the equally bad Sabotage) who also lifelessly directs what might be one of the dullest superhero flicks in recent memory. The movie resembles the Ghostbusters remake at times with it’s swirling energies and omnipotent villains surrounded by pulsating CGI, but at least that flick had some life to it. Despite source material ripe for a good anti-hero flick, in the spirit of the similar but far superior Deadpool, this dull mess is routine and forgettable in every way. From the dialog, to the ho-hum action to the visual design to the cinematography, there is nothing here that stands out save for Margot Robbie’s short shorts which she looks quite fetching in. Ayer doesn’t generate any suspense, energy or even attitude as the film tries way too hard to be hip by flooding the soundtrack with dozens of pop songs and classic tunes. There were about five in the first two or three minutes. It’s obvious and gets annoying after a while. There really is very little to recommend in this flick with the few effective scenes being those involving Affleck’s Batman and they are not long enough to save this overbearing bomb.

As for the cast, they are completely wasted with only Will Smith showing some gusto in his portrayal of the assassin Deadshot and he has some of the best lines…which isn’t saying much. Despite showing potential in the trailers, Margot Robbie’s Harley Quinn is only moderately amusing and never really has much to do except for some smart ass lines and a couple of so-so fight scenes with the Enchantress’s avocado-like minions. Jai Courtney gets a scant few laughs as the deranged Captain Boomerang, but like everyone else, he just never is given any truly impressive or impacting moments. This even extends to Jared Leto as the Joker and it’s really disappointing he is never really allowed to cut loose. He’s just an eccentric thug, nothing special. He showed potential, but the material is just not there and at the moment, the late Heath Ledger and Jack Nicholson have nothing to worry about…come to think about it, neither does Cesar Romero.

IMO this is the biggest dud of the summer and certainly the most disappointing. It had good source material and a solid cast, but was put in the hands of someone who had no idea what to do with it. It’s dull, lifeless and on an action/FX level completely routine. Add to that the story is a jumbled mess and there is very little to recommend here other than simple curiosity, or to witness a cinematic train wreck in motion. Also stars Jay Hernandez, Adewale Akinnuoye-Agbaje and Karen Fukuhara as team members El Diablo, Killer Croc and Katana respectively.

1 and 1/2 anti-heroines who deserved a much better movie. 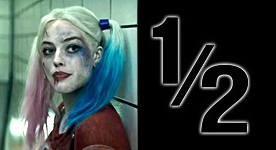 Birdman is a quirky and refreshingly off-beat comedy/drama from director Alejandro G. Iñárritu and appropriately stars Michael Keaton as Riggan Thompson, an actor trying to reignite his fading star. Riggan was once world famous for starring in the lead of the popular superhero franchise, Birdman. Now he’s entering his 60s and trying to validate himself and add some relevance back to his life by writing, directing and starring in a Broadway play. Obviously, what can go wrong, will go wrong and there are an eccentric group of characters…including his imaginary, costumed alter-ego…in the mix to add to Riggan’s troubles. Iñárritu has a very original style that fits the story so well. It’s filled with lengthy tracking shots following our characters from scene to scene and some delightfully surreal moments as well. The cast are all top notch, with Keaton giving one of his best performances and it definitely is his show. He is supported by the likes of Zach Galifianakis, Edward Norton, Naomi Watts and Andrea Riseborough who are all excellent in their roles, too. But, in my humble opinion, it is Emma Stone who steals every scene she’s in with her best work to date as Riggan’s fresh out of rehab daughter. She is simply a powerhouse in some scenes and holds her own…and more…with the seasoned veterans. A flick worthy of it’s praise. The only negative I had was that the jazz drum score got on my nerves after awhile. Otherwise, a great little movie.

If you are a fan of WWII flicks and all the familiar trappings, then you’ll probably enjoy this. I found it to be kinda dull and any dramatic weight or intensity of the action is brought down by an overload of clichés. The story, written and directed by David Ayer, finds Staff Sergeant Don Collier (Brad Pitt) leading his tank crew deep into Germany in 1945 to clean up the last of the German military resistance…and not having an easy time of it. Ayer throws every cliché in the book from situations to stereotypical war movie characters and adds some Private Ryan style violence, but the effect is still that we’ve seen it all before, since the very first WWII movie was made. The film is well-directed and action well-staged, but it’s just too familiar to be interesting and takes very few risks to liven things up. If you like this kind of film, go for it. Otherwise it’s nothing you haven’t seen in countless other likewise movies. The solid cast also stars Shia LaBeouf, Michael Peña, Walking Dead’s Jon Bernthal and Logan Lerman as the stereotypical green newbie.