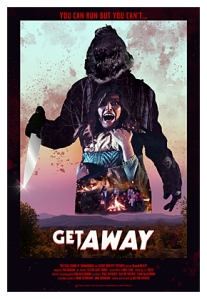 Film student Tabitha (Abigail Haggerty) is making a slasher movie for her thesis project. Fellow student Maddie (Emma Norville) gets a part in it. They even plan to shoot their movie at a summer camp. Unknown to the cast and crew of this amateur production, however, there is a real killer stalking them and filming his kills for his own fiendish film project.

Low budget horror is written and directed by Blayne Weaver, who also has a long resume as an actor. It has it’s heart in the right place, though not an overly successful effort. GetAWAY respectfully follows the classic slasher film tropes, like the crazy person (Kristen Trump) warning our filmmakers about impending doom and the cantankerous caretaker (Hank Stone) as an all too obvious suspect. The acting is amateurish, but somehow works in the context of making this bunch of wannabes seem more like real students trying to make a movie. Norville does make a decent enough final girl, too, as Maddie and she’s likable. There is little suspense or scares, the kills are simple but bloody and unfortunately, our killer lacks a really strong personality to give him more impact. Just a mask doesn’t an effective killer make. His identity reveal is also kinda ho-hum, though a much bigger reveal a bit later works very well, as does the flick’s finale. In conclusion, it’s not a terrible movie, certainly not unwatchable, just kind of routine and forgettable, even if well intended. Also stars Danielle Carrozza as cast member Kayla.