Jay screams for her life in It Follows!

MONSTERZERO NJ’S 25 HORRORS CURRENTLY ON NETFLIX THAT ARE WORTH WATCHING!

Netflix seems to be the go-to place to watch horror movies these days, so MonsterZero NJ has put together a list of twenty-five worth watching fright flicks screaming…oops, streaming…right now!

(for reviews of all these flicks pop the title in the search engine above to get MZNJ’s full review!)

Deaf mute Maddie unaware a killer lurks outside her door in Hush! 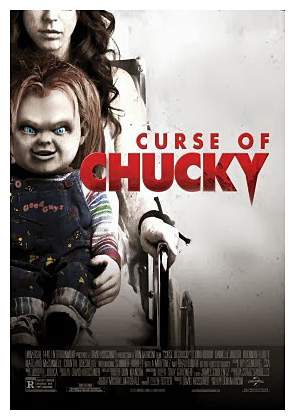 It’s been almost ten years since we last saw Chucky, the homicidal doll possessed by the spirit of deceased serial killer Charles Lee Ray, but Curse Of Chucky  brings him back in all his blood spattering glory…and turns out to be one of the best entries in the series.

The story takes place in an old house owned and lived in by Sarah Pierce (Chantal Quesnel) and her wheelchair-ridden young daughter, Nica (Fiona Dourif). When they receive a strange package that contains an old Good Guys doll named Chucky (once again voice by Brad Dourif), things obviously start to go wrong in the Pierce home. To start, Nica wakes up to find her mother dead, an apparent suicide…or so we are led to believe. Her sister Barb (Danielle Bisutti) arrives to console her along with her husband Ian (Brennan Elliott), daughter Alice (Summer Howell) and nanny Jill (Maitland McConnell). Soon a night of family drama turns into a night of blood curdling terror as Chucky begins to slaughter the unsuspecting occupants one by one.

Directed and written by series writer and Seed Of Chucky helmer Don Mancini, Curse returns Chucky to his more menacing roots and for the most part jettison’s the goofy humor that permeated the last two installments. What we get is a nice and atmospheric haunted house slasher, that has some real nice tension and suspense along with a few effective and gruesome kills. The added element of Nica being confined to a wheelchair is used to maximum effect by director Mancini and there are some really intense sequences, especially when Nica comes to realize who and what Chucky is and she becomes his next target. There are some really nice surprises, too, especially when the film links to the previous chapters and we get some fun nods to past Chucky flicks that I won’t spoil here. The FX bringing the killer doll to life are some of the best in the series and the gore effects are well done and there is plenty of the red stuff spilled.

The film isn’t perfect. There are some flaws, mostly the film looses momentum somewhat during its final scenes which are fun, but in an effort to explain Chucky’s arrival in the Pierce house and why he is there, we are treated to flashbacks and scenes that interrupt the tension and take us out of the confinement of the spooky old house, which to this point added a lot of atmosphere and the isolation inside it added some tension. The scenes are fun as said, but don’t carry the same intensity of what preceded it. The film kind of ends on a much lighter note, more akin to the last two movies, while the earlier scenes of the film match the original’s more serious tone.

Flaws aside, this is a solid and entertaining horror flick that deserved better than being dumped direct to home media. It’s a welcome return of a modern horror icon and a nice addition to his movie legacy. Watch through the credits for a fun post credits scene that should delight and amuse fans of this long running series.

Chucky returns in Curse Of Chucky, an all new horror feature coming straight to DVD and Blu-Ray on 10/08/13!