Swamp Thing was sadly canceled after it’s first episode aired and before it was even given a chance…and it’s a shame. The ten episode first season nailed so many aspects of the comics and also managed to be one of the better horror shows currently on TV. Was that the problem? Was it too edgy? Right now there are few answers to the questions of why a great first season was also it’s last.

The story takes place in Marais, Louisiana, where an outbreak of some strange illness has occurred. CDC doctor Abby Arcane (Crystal Reed) arrives on the scene to try to find some answers and a cure. She meets eccentric scientist Alec Holland (Andy Bean) who tells her the answer is in the swamps. There they find that someone has been dumping a chemical growth accelerator in the swamp that has had a bizarre effect on the plant life. Alec is murdered in the swamp one night for what he knows and his body is regenerated by the plants into a massive human/plant hybrid..The Swamp Thing (Derek Mears)! Now Holland must not only come to terms with what he’s become, but protect Abby from those who would harm her and protect himself for those who find him a curious object of study.

Written and directed by a number of talents (see list below) Swamp Thing is a fun, atmospheric and delightfully gory show, that takes itself seriously despite it’s comic book roots. The show uses the North Carolina locations very well and the production and set design is perfectly spooky and fitting of the overall tone. There is a lot of action and intrigue as Abby and Holland uncover a conspiracy led by local businessman Avery Sunderland (Will Patton), his chief scientist Jason Woodrue (Kevin Durand) and crooked sheriff Lucilia Cable (Jennifer Beals), who are trying to exploit the swamp for profit. This puts Abby in danger and makes Holland/Swamp Thing a hunted man/thing. The episodes are each slightly under an hour and with the variety of directors and writers, the show maintains a consistent look and tone. The FX are good, especially the prosthetics and the CGI ranges from good to passable with some weak spots here and there. This show had a lot of potential and whatever the reasons for it’s canceling, unfortunately there will be some loose ends that will never get tightened unless, somehow, there is a continuation either by revival or a feature film. Sad, this show had a lot of potential and a strong first season start that was thrilling and enjoyable for comic and horror fans especially.

The cast really click here. Crystal Reed makes a solid heroine in the determined and resilient Abby Arcane. The actress presents a strong, intelligent and caring young woman that makes her very likable and endearing. Andy Dean is good as Holland, thought we only see him in the first episode and a few other spots. He builds a likable character in limited time. Derek Mears shines as the plant hero. He does a very good job giving Swamp Thing some complex emotions as he tries to figure out who and what he has become. He can be fierce and dangerous and yet kind, gentle and very sympathetic. Too bad we can’t see where he could take the character. Mears and Reed also had some nice on-screen chemistry, too. Patton makes a nice villain as the scheming and greedy Avery Sunderland, He’s a man that will kill for what he wants and does. Kevin Durand’s Woodrue is a scientist blinded and made cruel by his work. The post credits scene at the end of the last episode signals a side of him we would liked to have seen more of. The rest of the supporting cast, including Jennifer Beals and Ian Ziering, all play their parts well, A very solid cast for a really well done production.

In conclusion, This is a sad example of studio chaos ending a good show before it had a chance. This had some great atmosphere, a cool horror movie tone, yet didn’t ignore it’s comic book roots. There was some great production design, some spooky visuals and settings and a healthy amount of blood, gore and creatures. One of DC’s best representations of their properties as of late and it’s canceling is as mysterious as it’s swamp setting! 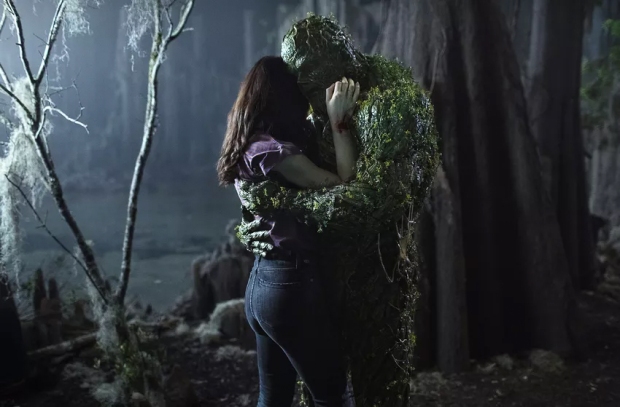