THIRD CONJURING FLICK GETS A TRAILER !

A trailer has arrived for the third flick in the Conjuring franchise, The Conjuring: The Devil Made Me Do It!

“Paranormal investigators Ed and Lorraine Warren try to uncover the truth behind a murderer’s claim of demonic possession.”

The film is directed by Michael Chaves from a script by David Leslie Johnson-McGoldrick for producer James Wan and stars Vera Farmiga and Patrick Wilson as Ed and Lorraine Warren. Flick is due to be released theatrically and on HBO Max on 6/4/21! 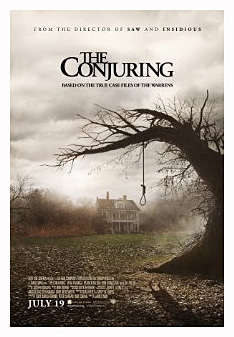 Much like his Insidious, James Wan delivers some very spooky goods during the first two thirds of his latest haunted house chiller, but as with that film, loses his grip somewhat in a theatrical and overly familiar last act. The Conjuring takes place in 1971 and is based on a supposedly true case-file from world renown paranormal investigators Ed and Lorraine Warren (played here by Patrick Wilson and Vera Farmiga). It tells of one of their most horrifying cases, the haunting of a remote, old Rhode Island home bought by Carolyn and Roger Perron (Lili Taylor and Ron Livingston) and their five daughters. Soon after they move in, things start to go bump in the night and the family, especially the children, are increasingly terrorized by a malevolent entity and a variety of other spirits. Carolyn comes to the Warrens for help and what results is a paranormal investigation that turns into a battle against the vengeful spirit of a woman accused of being a witch and Satan worshiper, who wants to use Carolyn as a vessel for her malevolent deeds.

For the first two thirds of this flick, the skillful Wan is very good at utilizing the time honored haunted house conventions and using them well to give us some nice chills and scares. But despite Wan’s craft at scaring us in the first 2/3 of this horror flick, he once again, as he did in Insidious, looses his grip on us with a finale that is theatrical and far too routine, as it presents yet another by-the-numbers exorcism scene that brings nothing new and therefore no suspense to the story. It’s just more levitation and vomiting and scary contact lenses that adds nothing remotely fresh to the convention. And this is odd because, Wan is good as making the conventions effective such as birds flying into windows and the customary furniture moving and shadowy phantoms. We’ve seen it all before, sure, but Wan presents them well. Yet while the rest of the movie is grounded in these basic conventions, he goes full blown Hollywood horror with his last act and we get a finale that is stale and predictable right down to characters being dragged around the floor by invisible assailants. Granted he is following a supposedly true tale, but it disappoints that he can’t seem to maintain the level of creepiness and loosens his grasp on us in the over-indulgence of giving us a ‘big finale’ as he did in his last haunted house horror. And even with that, Conjuring ends suddenly and with kind of a whimper when all is said and done. You’re like ‘that’s it? it’s over?’ This is supposed to be one of the Warrens’ worst cases, yet it doesn’t seem any worse then their Amityville Horror or Haunting In Connecticut cases. The film never really takes us on the decent into Hell you’d expect when someone like The Warrens makes claim that this is one of their worst encounters. It isn’t any more severe then Insidious or any other haunted house movie.

But, still, it is effective enough to entertain to a decent degree and Wan’s visual style is great to look at as always. Despite some hokey dialog, the cast all perform well, thought I again feel Patrick Wilson is a bit wooden especially compared to the livelier Farmiga and Lili Taylor, who really does strong work here.

All in all, The Conjuring is effective enough to amuse and entertain, but in the end, is far too routine and familiar to really be something special or truly scary enough to make it stand out from the rest. Go in with moderate expectations and you might have a good time. 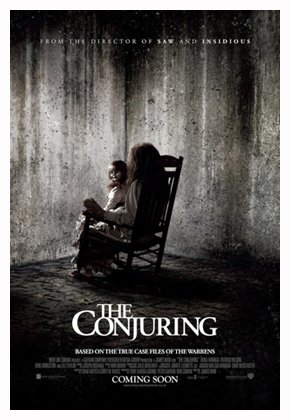 I not only enjoyed James Wan’s Saw and Insidious but, am also a fan of the paranormal investigations of  Ed and Lorraine Warren so, this flick is right up my alley!