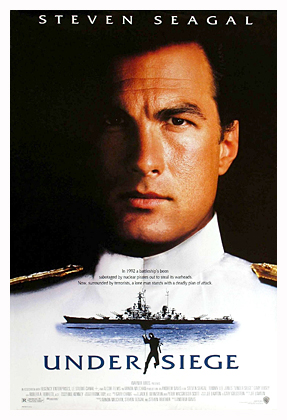 Flick finds Navy SEAL Casey Ryback (Steven Seagal) serving as a cook on the battleship USS Missouri for disciplinary reasons. It’s the captain’s birthday and a big celebration is planned. Rogue Navy officer Commander Peter Krill (Gary Busey) uses the celebration as a cover to bring in terrorist William Strannix (Tommy Lee Jones), an ex-CIA operative, to take over the ship with his men. Now it’s up to cook Casey and a stripper hired for the party (Erika Eleniak) to outwit Strannix and his thugs and take back the Missouri and save the crew.

Arguably Steven Seagal’s best film, Under Siege is directed by Andrew Davis (Code of Silence, The Fugitive) from a fun script by J. F. Lawton. Davis takes the now classic Die Hard scenario and milks it for all it’s worth in his battleship setting. There is a lot of action, some taunt suspense and some nice humor mixed in with Seagal’s trademark martial arts. He gets one of the liveliest performances out of the usually stoic action star and some very strong but entertaining villains in Busey and Jones. The film used a real battleship as it’s setting, the USS Alabama, and the cat and mouse chase between Strannix and Ryback works really well in the claustrophobic setting. Just so it doesn’t wear out it’s welcome, the filmmakers find a few reasons to get the action outside and on deck now and again. There is a generous amount of violence and bloodletting, as Seagal’s style of hand to hand combat and weapons handling gives him plenty of opportunities to stab, shoot and break numerous bones, when not blowing up bad guys with booby traps. It’s a lot of fun and very fast paced, though does take enough time to establish it’s characters which are colorful.

As for those characters the film has a top notch cast. This might be one of Seagal’s best performances, as the action star gives Casey a bit more of a sense of humor and heart than his usual straight-faced tough guys. He has some nice charm and can act a bit. One of the reasons he gets to do this is being paired with Erika Eleniak’s terrified and out of place Jordan. The Baywatch star, at first, is just scared out of her wits, but the character grows from a frightened young woman to a fighter and solid part of the resistance, when she and Casey go on the offensive. The script gives the two some nice scenes together and the actors have a good chemistry between them. Busey and Jones make very good bad guys. Both go just over-the-top enough to be fun, but not enough to make a joke out of the proceedings, or lose their threat factor. They are both dangerous men. Rounding out is a great Colm Meaney as one of the lead henchmen, Nick Mancuso as a sleazy CIA operative, real-life Marine war vet Dale Dye as a navy officer, Andy Romano as Admiral Bates, along with Bernie Casey, Dennis (Retribution) Lipscomb and even Kane “Jason Voorhees” Hodder. A great cast, both main and supporting.

A classic action flick and depending on what you look for in one of his films, Steven Seagal’s best flick and performance. There is plenty of action, strong suspense and tension and some great characters, who interact wonderfully. You get the traditional elements from both a Steven Seagal movie and a Die Hard-esque thriller, yet Under Siege has it’s own heartbeat. Solid directing from veteran Andrew Davis and a tight, fun script from J.F. Lawton and you have pretty much all you could want from an action flick.

While presented in all seriousness by director Christian E. Christiansen, from Karl Mueller’s script, this Amish set slasher/supernatural horror comes across as fairly silly and very cliché. The story has a prophecy of a coming evil being fulfilled when six girls are born on the same night, in the same Amish village on the sixth day of the sixth month. One mother fearing she has unleashed this evil, murders her child, but the other five are left to be. We pick up as they all are about to turn 18 and now someone…or something…is killing them off. Film is actually fairly well directed, but just can’t rise above the familiarity of these type of ancient prophecy flicks such as the village elder (Colm Meaney phoning it in) using his people’s fear to control them and the rebellious girl (Alycia Debnam-Carey) breaking the rules to investigate…and date a boy from the outside. We’ve seen it all before and better. It was never boring, but never scary or suspenseful either. Also stars Dexter‘s Jennifer Carpenter who visibly looks like she would rather be anywhere else but in this movie. The young cast members, including Adelaide Kane, give it their all and there is some decent bloodshed, so that helps a bit. Not unwatchable, just nothing special. 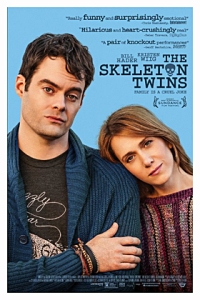 Directed by Craig Johnson, from a script he co-wrote with Mark Heyman, this indie comedy/drama follows the indie formula fairly closely by inhabiting an emotion-filled story with eccentric and dysfunctional characters on a journey to discover themselves. It is the story of estranged twins, the suicidal Milo (Bill Hader) and the married but unfaithful Maggie (Kristen Wiig), who are reunited when Milo attempts to kill himself. Milo comes to upstate New York to live with Maggie and her clueless husband (Luke Wilson) and they learn to love themselves and each other. And as in a lot of these films, there are some character revelations, but ultimately the film really doesn’t go anywhere story wise, though it’s not really meant to. While I found a lot of it to be cliché for these type of flicks, even though I do have a soft spot for indie films, I did find it worth watching for the acting from Hader and Wiig and the film is never dull and can be subtly funny at times. The two leads are superb and both play roles a bit different than we are used to seeing them in and they have great chemistry together and it makes all the clichés work. So, I recommend it for an enjoyable 90+ minutes of two underrated performers creating two very offbeat, but ultimately likable characters and personally I loved all the Nyack, New York locations, especially during the Halloween set sequences.