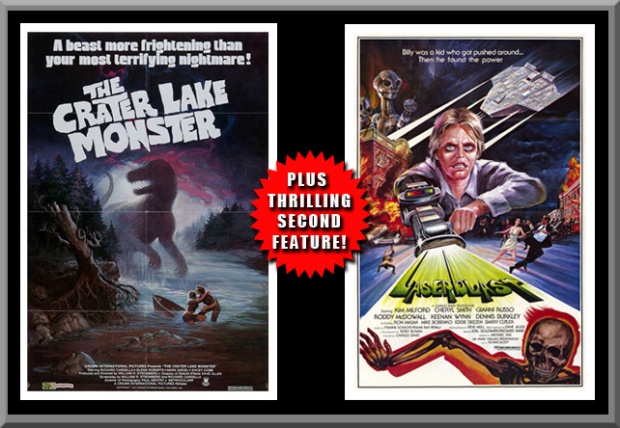 I know I have covered these two ‘so bad it’s good’ 70s flicks before but, they do make a great pair with their bad acting, awful dialog and delightfully charming stop motion animation FX work by the late, great David Allen and SPFX make-up and prosthetics from Steve Neill. With a few brews, these two cult classics can be a lot of fun even without being mocked by the MST3K gang!

I’ll start out by saying this isn’t a good movie in the conventional sense, but I love monster movies, especially the old fashioned stop motion animation ones and, as you may know by now, I do love a ‘so bad it’s good’ flick. So I cut this movie a lot of slack. Plus, it does have a bit of personal nostalgia for me as I saw it at the Showboat Cinema in Edgewater N.J. when it first came out in 1977.

Low budget sci-fi/horror begins as a meteor crashes into a California mountain lake by a remote rural town. The lake temperature rises and a long dormant plesiosaur egg hatches and 6 months later we have a giant prehistoric monster on the loose feeding on the local livestock and any inhabitants who get near the water. It’s now up to Sheriff Steven Hanson (Richard Cardella who also co-wrote) to try to find a way to stop the rampaging beast who is making a meal out of locals and tourists alike.

The Crater Lake Monster has a good B-movie plot that is wasted by the totally amateurish handling of the production by director and co-writer William R. Stromberg. If the lame attempts at suspense aren’t enough, the weak dialog, awful acting and ridiculous attempts at comic relief by two good ole boys who rent boats (Mark Siegel and Glen Roberts), put the nail in coffin of this flick’s potential as a serious B-movie horror treat and catapults it into ‘so bad it’s good’ territory…though it’s on thin ice there, too. *Cardella claims the withdrawal of funds and hiring of a terrible editor by Crown International Pictures was the cause of the film’s ruin, but neither of these reasons explain how sub-par everything, other than David Allen’s cool stop motion animated dinosaur, is done. The title creature is a fine bit of FX from the under appreciated Allen, but doesn’t have quite enough screen time to make up for the film’s flaws and even it’s climactic battle with a snow plow is far too short to live up to it’s entertainment potential.

But there is definitely some fun to be had at the incompetent film-making here and there is definitely some 70s nostalgia to enjoy, but how much you enjoy it depends on just how tolerant you are of a bad movie like this. I enjoy them for what they are and I like this flick for all it’s badness and there is a cool beastie. With a couple of brews this can be a good time, if that’s your thing. It definitely is mine. In an era of senseless remakes, this is a title screaming to be turned into a better movie by more talented hands, but they sadly don’t make movies like this anymore, at least not with the kind of charm flicks like this had. And despite all Crater Lake‘s flaws, it still has it’s heart in the right place and plenty of charm. And that goes a long way with a movie geek like me. A guilty pleasure for sure but, a fun one.

MONSTERZERO NJ EXTRA TRIVIA: The full size creature head was made by Steve Neill, another unsung hero of movie make-up and prosthetic FX.

Rated 3 (out of 4) guilty pleasure plesiosaurs!

Laserblast is a low budget sci-fi thriller from Charles Band that actually could have been a decent B-movie had it been in more competent hands instead of becoming one of MST3K’s funniest episodes. Even still, it is a guilty pleasure of mine and carries the nostalgia of being one of the flicks seen at my beloved Oritani Theater in Hackensack, NJ.

Laserblast opens as an alien outlaw is being pursued on Earth across a desert. After a brief firefight, the reptilian space cops (some cool stop motion FX from the late David Allen with the outlaw’s and alien possessed Billy’s make-up FX by Steve Neill) blast the alien bad guy, but in an effort to avoid detection, are forced to flee and the alien’s weapon is left behind. Enter troubled teen Billy (Kim Milford) who, aside from his girlfriend (70s exploitation queen, Cheryl “Rainbeaux” Smith), is picked on by almost everyone in town including, the pot smoking cops. Obviously fate puts the alien weapon in Billy’s hands and now he has the power to get back at those who abuse him. With the alien weapon transforming him into something unearthly, can Billy be stopped?

Laserblast is sadly directed in a pedestrian manner by Michael Rae…from a script by Frank Ray Perilli and Franne Schacht…and a little energy would have helped a lot as even Billy’s climactic rampage (if blowing up a few cars and a mailbox is a rampage) is very by-the-numbers and lacks any suspense. Rae’s idea of dramatic intensity is to show the same explosion over and over in slow motion from multiple camera angles and have star Milford overact when under alien influence. And speaking of the acting, the performances range from bland to bad with even cameos from vets Keenan Wynn and Roddy McDowall being obvious paycheck grabs.The casting is also odd in the case of Milford who is too good looking and well built to be believable as the ‘picked on kid’ especially, when nerd legend Eddie Deezen (his first flick), is cast as one of the bullies. Love to ask the casting director what the inspiration was for that casting, aside from booze. But the cast isn’t totally to blame as the laughably bad dialog from the weak script isn’t going to help anyone’s performance especially, when the director doesn’t seem to be giving much inspiration. At least David Allen provides some good stop motion effects and FX model making legend Greg Jein gave us a cool alien spacecraft for such a low budget flick, that and things are blown up quite frequently.

Despite all it’s flaws, I still think there is a ‘so bad it’s good’ charm here and a lot of entertainment can be had from the epic fail of it all. And as stated before, the film does have the previously stated nostalgia element for me personally. So I would recommend it to those who love to have a good bad movie along with their six pack or simply enjoy laughing at a cheesy 70s low budget Sci-Fi flick that aims high and fails in entertaining fashion.