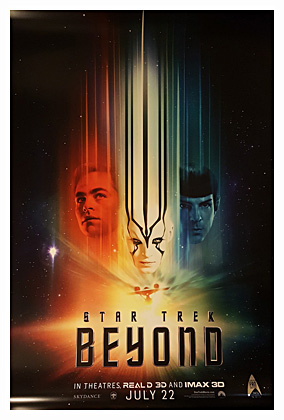 Flick picks up almost three years into the Enterprise’s five year exploration mission, which puts them cleverly “beyond” the first three years/seasons of the original show and thus into new story territory. This third installment of J.J. Abrams’ reboot series is now directed by Justin Lin and tells of a devastating attack on the Enterprise while on a rescue mission in uncharted space. An alien warlord named Krall (Idris Elba) wants not only an ancient device stored on the ship, but the crew itself to drain their life-forces. With their precious ship destroyed and now stranded and hunted on an alien world, Kirk (Chris Pine), Spock (Zachary Quinto) and McCoy (Karl Urban) must figure out a way to rescue the crew, stop Krall’s diabolical plan and get home to friendlier space.

Justin Lin doesn’t quite bring the dramatic intensity Abrams did to his Trek films and his action scenes may not resonate as strongly, but with Simon Pegg and Doug Jung’s script in hand, he does give the series a lighter and more fun touch than the more dour Star Trek Into Darkness. The film also feels the most like a Star Trek episode which works for and against it, but mostly for. Giving the flick a less epic feel than the previous two, does reduce the spectacle aspect of the proceedings and the action is more close quarters fisticuffs than battling starships until the last act confrontation at a gigantic space station. Massive sets are replaced by alien landscapes and caves, but much like the 60s series and even the Next Generation series, these are settings our characters often found themselves in. This does give way to some really nice character interaction, as the FX take a back seat, with new character, alien refugee Jaylah (Sofia Boutella) fitting in nicely when paired with members of the prime crew. In true Star Trek tradition, the first two thirds of the film follow along as the crew does what they do best, use their wits to figure out how to survive and save the day. Then we get some of the spectacle we’ve come to expect from this reboot series, in the finale. In comparison, not quite the action packed popcorn flick the first Abrams Trek was, yet also doesn’t take itself nearly as seriously as Into Darkness, which is refreshing. There are some really nice Trek moments, too, including a nice tribute to the late Leonard Nimoy’s Spock Prime and a shot quietly celebrating the original Trek crew for this year’s 50th anniversary, that will surely moisten the eye of even the hardest-hearted Trekkie. The film also earns extra points for dedicating the film to both Nimoy and Anton “Chekov” Yelchin, who was tragically killed just a few weeks ago. A real touch of class…which is what Star Trek was always all about. On a production level the film looks great, Lin has a good visual eye and the FX are spectacular, especially during the cranked-up and fun finale.

The cast once again bring these classic characters to life, but not without their own individual touches and the script from Simon “Scotty” Pegg and Doug Jung does it’s best to give each character healthy interaction and scenes for them to shine. It was nice to see Anton Yelchin get a generous amount of screen time with what is sadly his last performance as Pavel Chekov and Pine, Quinto, Urban, Saldana, Cho and Pegg all have their classic character interpretations locked in. As for the newcomers, Sofia Boutella is feisty and energetic as Jaylah, a survivor of Krall’s villainy whose “home” plays an integral part in our heroes’ plans to defeat the despotic bad guy. As Krall, we have a strong villain in Idris Elba, though we could have used some more time getting to know him a little better as his motivation aren’t really clear till the last act reveal…a reveal sadly seen coming almost from the beginning. If the script has a big flaw, it’s in failing to keep it’s big surprise from being obvious early in the second act.

Overall, this was a fun movie. Though in some ways the weakest of the three, due to Lin simply not being as strong a director as Abrams, especially on the last two films. He moves things fast enough but sometimes a bit more dramatic intensity was called for. Still, it is lighter and more fun than the last installment, though it being the most Star Trek of the three, might also alien-ate (had too) some of the non-Trek crowd that supported the last two flicks. For Trek fans it’s more like an episode than a movie and the most nostalgic because of that, especially when you add some really nice touches harkening back to it’s TV forefathers. Not a great flick, but a fun installment that earns extra points for it’s loving tributes to a legendary actor and his character, not to mention, a young talent taken from us far too soon…and if Star Trek is about anything, it’s about heart…and this film has plenty of that.