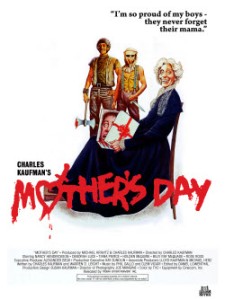 Mother’s Day actually bothered me when I first saw it in a theater in 1980. I guess that is the sign of a good horror, but it has kept it from being a favorite though, I admit it’s quite effective. The problem I have is that for me personally, it’s just a bit too sadistic and misogynistic for my tastes and the fact that it has a twisted sense of humor about it’s cruelty and acts of rape and brutality, doesn’t quite sit well with me. But I understand it is a bit of a cult classic at this point and recognize it’s place as such.

Mother’s Day is the story of three pretty friends, Abbey (Nancy Hendrickson), Trina (Tiana Pierce) and Jackie (Deborah Luce) who go camping in the woods and are kidnaped by redneck sons, Ike (Holdem McGuire) and Addley (Billy Ray McQuade) and their demented Mother (Rose Ross). The girls are held in their decrepit home as the boys commit vicious acts of beating, humiliation and rape on one of the three women as mom watches and cheers them on. To them rape and brutality is a game and this is the element that bothers me. The film is a little to giddy about these acts. Of course, the remaining two girls do eventually escape and let’s just say payback is a gory bitch.

Writer/director Charles Kaufman has created a sick and twisted little movie that presents some gory violence and brutal acts all with a demented sense of humor that doesn’t seem quite right. The cast all act out their parts well and I would like to think these acts were difficult for them to portray. The gore effects are effective enough and of course, there is that very effective shock ending. The film is one of the more unique horrors to come out of the 80s and I will not deny it’s place in how it is regarded by many, but my personal views on violence toward women conflicts with the disturbingly glib way the acts are portrayed on screen. Just because the women get cruel payback doesn’t make it any less unsettling that their torment is played almost for laughs. Maybe that was the point, but in that case it worked a little too well for my tastes.

A disturbing 3 maniac moms (Personal note: the rating is based on it’s effectiveness as a horror film. As my review stressed, this is not a film that personally appeals to me.)