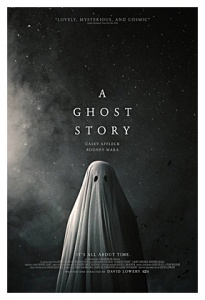 Supernatural drama tells the story of a young couple (Casey Affleck and Rooney Mara) whose lives are shattered when the husband is killed in a car accident right outside their home. His spirit returns to the house and watches as his wife grieves, heals, moves on and eventually moves out. Now it is his spirit that needs to learn to move on as he haunts the house and anyone that comes to live in it.

Written and directed by David Lowery, this is a somber yet effective story of grief and healing told interestingly from the perspective of the deceased. Lowery also has the audacity to have his silent, brooding ghost portrayed simply by having his actor wear a sheet with the eyes cut out and it works. It is definitely not a movie for everyone as Lowery lets scenes linger for a very long time, but these scenes have resonance and Lowery achieves a lot with silence in terms of telling his story. It is only in the last act when things get a little trippy that the film looses it’s grip a little bit. Here the ghost seems to be reliving the history of the house, up to his living there with his wife, though reliving the couple’s time there does help us understand his reluctance to leave…and maybe helps him understand too. A very unusual but effective and original indie flick from David Lowery, with very good performances from his small cast. 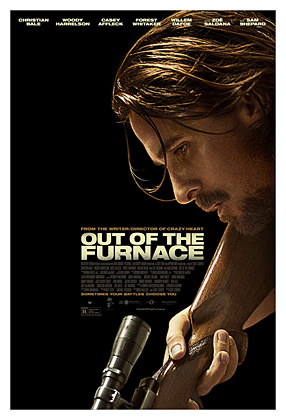 Out Of The Furnace is a very intense and well-acted drama that only makes one glaring plot mistake in an otherwise solidly written film by Crazy Heart’s Scott Cooper. The film takes place in the run-down steel town of  North Braddock, PA. and tells the story of brothers Russell (Christian Bale) and Rodney (Casey Affleck) Baze. Russell is a good natured and hard working man who, like his ailing father, works at the steel mill and earns a meager but honest living. Rodney is a traumatized Iraqi war veteran whose inner rage prevents him from finding peace with a normal job and turns to gambling and illegal fighting under the guidance of small town crook, John Petty (Willem Dafoe). A tragic accident sees a tired and mildly intoxicated Russell hit another car and kill the mother and child within. This sends Russell to prison while Rodney’s inability to take a fall when required, leaves him in growing debt. Once his time is done, Russell is released to find his girlfriend Lena (Zoe Saldana) has left him for the local sheriff (Forest Whitaker), his father has died and Rodney in deep with the sleazy local gangster Petty. But despite his efforts to set his brother straight and get his life in order, Rodney forces Petty to get him involved with an illegal bare-knuckles fight run by vicious backwoods gangster Harlan DeGroat (Woody Harrelson) in the Ramapo Mountains in New Jersey. Rodney hopes this big payoff will clear his debt with Petty and clear Petty’s debt with DeGroat. But Harlan DeGroat is a devious and vile person and despite taking the fall he was told too, Rodney and Petty do not return home. The law’s inability to pierce the veil of silence around these mountain-folk and exact justice sets the mild-mannered Russell on a vengeful collision course that will put him face to face with a very dangerous man.

Make no mistake, as directed and co-written (with Brad Ingelsby) by Scott Cooper, this is a strong and sometimes powerful drama about a man who wants to live a simple, peaceful life, but is forced by circumstance to put his good-naturedness aside and take vengeful action. During the 80s this kind of plot might have been a far simpler film starring the likes of Chuck Norris or Steven Seagal, but under Cooper’s guidance, a simple revenge flick becomes a powerful story filled with multi-dimensional characters. And it is the characters that are the focus of this tale and not the minimal gunfire or occasional violence…though that has it’s own intensity as well. Which does bring me to my one gripe….

…As this film does choose to focus on the characters and the effects the film’s events has on their lives, I found it very hard to believe that Russell would put innocent people in harm’s way and in one instance, get someone killed for his own personal revenge. I understand he is driven by anger and frustration, but especially after seeing how torn-up he was after his car accident cost two innocents their lives, the fact that even now he would again put lives in danger, other than his own, is hard for me to accept. It’s the only major flaw I find with this otherwise engrossing drama. I don’t believe Russell would put his quest for payback before the lives of others and here he does not once but twice. To discuss it any deeper would be to present plot points important to the story, so I won’t go any further, but it doesn’t make sense coming from the character we’ve gotten to know.

And as we are discussing the characters, it’s only fitting to mention the great cast that brings them to life. Bale is once again near brilliant as the simple, kind-hearted Russell and portrays his slow burn path from simple steelworker taken by the events around him on courses that shatter the quiet life he seeks and has him turn against his very own moral code. Casey Affleck is a rage-filled powder keg and despite his anger and inner pain, we do feel sympathy for a man who fought through a nightmare for his country and now feels lost and abandoned by it. He and Bale have some really intense scenes together and I do mean intense. Defoe is solid, as always, as the sleazy, yet somehow likable small time crook Petty. He seems like the type of small fish criminal who doesn’t understand that he shouldn’t play in the bigger pond until it’s far too late. Harrelson again delivers the goods with his portrayal of  Harlan DeGroat. He is intense, frightening and a little intriguing as the backwoods drug dealer and crime-lord with very little morality or sympathy. He’s a monster, but one with multiple dimensions and not a cliché or caricature as the role could have been in a lesser film. Saldana shows she is more then a pretty face as Lena, but her character seems to disappear for the most part once the meat of the plot gets in motion. She is good in her scenes, but the character all but disappears in the last act and seems forgotten. Rounding out the cast is Forest Whitaker doing his usual good work as the sheriff with whom Russell has personal issues involving Lena and Sam Shepard, who can sit in a chair and ooze character, is very likable in a small role as the Baze boys’ uncle.

So basically we have a simple story made into a powerful drama by a skilled writer/director and a simply great cast that is able to overcome a glaring plot flaw to retain it’s strength and impact by the time the credits role. Not quite a great movie, but a really damn good one with some top notch acting by a first rate cast.