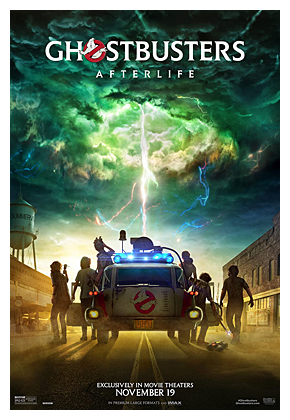 Ghostbuster: Afterlife opens with down on her luck single mom Cassie (Carrie Coon) receiving word her estranged and eccentric father has died and she has no choice but to move to his broken-down farm in Summerville, Oklahoma with her kids Phoebe (Mckenna Grace) and Trevor (Finn Wolfhard). Upon arrival, science nerd Phoebe begins to sense a presence in the house and soon discovers her grandfather was Ghostbuster Egon Spengler and that he was out there trying to stop the next prophesied coming of Gozer the Gozerian (a cameo that won’t be spoiled here). Now Phoebe, Trevor, new friend Podcast (Logan Kim) and teacher Mr. Grooberson (Paul Rudd) must get those proton packs working and save the world, like their grandfather did thirty-seven years ago.

Sequel is directed wonderfully by Jason Reitman from his script with Gil Kenan and obviously based on the 1984 film. It is not just a sequel though, but a heartfelt love letter to not only the iconic pop culture classic, but 80s coming of age adventures as well. As such, Reitman gives us a very likable bunch of characters to populate this film with, especially Phoebe, and links it back to and pays homage to Ghostbusters in many clever and nostalgic ways. He films the flick like one of those coming-of-age movies and delivers some nice goosebumps when Phoebe, led by a certain spirit, begins to find the hidden away ghostbusting equipment, as Trevor finds and repairs the Ecto-1. The trail leads the kids to an old mine and soon some familiar sites and ghoulish faces start to surface, as the clock counts down to Gozer’s return. The tone is a bit more serious than the original, with some drama between mother and kids, especially since Cassie is still bitter towards her father for leaving her. It lightens up as Rudd’s Gooberson becomes a romantic interest for her and a believing friend for Phoebe, and the kids slowly transform into a new generation of Ghostbusters. Technically, film is nicely shot with some really solid visuals, from Egon’s spooky old house, the Midwest farm country setting, and the Gozer temple within the mine that was delightfully nostalgic. The SPFX are top notch and even if it is a little slow to get started, it delivers a fun and tear-jerking climax with Ghostbusters old and new facing the paranormal threat. A film with a big heart that knows when to be subtle and when to let the ectoplasm fly.

Reitman has assembled a great cast. Grace McKenna is simply wonderful as nerdy genius Phoebe and she evokes the great Harold Ramis as Egon nicely, while being totally her own character. Wolfhard is good as the more cynical Trevor, who is struggling to just be a normal teenager. Carrie Coon is also very good as their bitter and angry mom, who’s still hurting over Egon’s abandonment of his family. Rudd is fun as summer school teacher and science nerd Mr. Grooberson. He adds a little levity to the proceedings early on, when the film is at its most dramatic. We also have Celeste O’Connor as Trevor love interest Lucky, Bokeem Woodbine as her sheriff father, and Logan Kim is fun as the eager to help Podcast. As for the appearances from original cast members, everyone who does appear fits back into their roles with nostalgic fun and see if you can recognize a certain actress as Gozer the Gozarian. A great cast.

Overall, this was a delightful and very sincere tribute to and continuation of a true comedy classic. It was great to see returning familiar faces, and the new editions were very welcome ones. It starts out a little slowly, with a more serious tone, but once its momentum starts, it’s a blast of fun as it pays homage to both Ghostbusters and the coming-of-age flicks of the 80s. The climax is simply wonderful and will find any fan of this franchise getting a little choked up. Highly recommended and watch through the entire credits!

On a more personal note…I was there in 1984 on opening night when I saw the original Ghostbusters and it became an important and much beloved film in my movie loving life. There are so many parts of Ghostbusters: Afterlife that made me smile, gave me nostalgic goosebumps and yea, that ending had me crying life a schoolgirl. Thank you, Jason Reitman for bringing back the magic that Ghostbusters fans thought was long past! -MZNJ