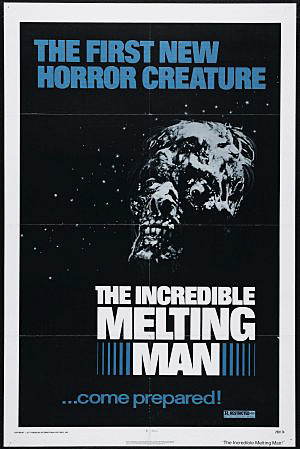 My friends and I had a lot of fun when we saw this cult classic at the legendary Oritani Theater in Hackensack N.J. and it was gleefully for all the wrong reasons most of the time. The Incredible Melting Man is a delightfully bad 1977 sci-fi/ horror about ill-fated astronaut Steve West (Alex Rebar) who returns from a space mission exploring Saturn’s rings with a mysterious condition where his flesh is melting and he is radioactive. For some reason, just as mystifying as to how he got this way, (there is a hint it was caused by viewing the sun through Saturn’s rings, but it’s never confirmed.) Steve must consume human flesh to slow down the degeneration. As his mind degenerates, too, West escapes the hospital and begins to chow down on the locals while he is pursued by friend Dr. Ted Nelson (Burr DeBenning) and Air Force General Perry (Myron Healey). As Steve melts more and more, the more locals, including Nelson’s in-laws, fall victim to the stricken astronaut who becomes less and less human by the minute. Can he be stopped? Can the process be reversed? Who will be his next meal?

All the questions are answered and if this kind of flick is your thing, you’ll have a fun time watching the answers unfold. Despite it’s less then 90 minute running time the film is methodically paced. There are a lot of scenes of West roaming around the countryside with the last moments of the mission playing over and over in his head while Dr. Nelson follows his trail with his handy geiger counter. Most of the attacks are off camera thought there are plentiful shots of the gory carnage and one great shot of a dismembered head going over a waterfall and smashing on the rocks below. Aside from the gore and melting FX, which were done by the now legendary Rick Baker, there is plenty of hilariously bad dialog and unintentional laugh inducing situations. The film, by writer/director William Sachs (Galaxina), has an uneven tone, though it’s supposedly not all his fault. Sachs claims he wanted something more campy and fun like the sci-fi flicks of the 50s, while the producers wanted a more serious horror flick and these artistic differences give the movie an unbalanced mix of serious moments and much lighter moments. But the thing is, some of the more serious scenes come across as unintentionally funny and some of the humorous scenes meant to be funny, aren’t successful in their attempt and just come across as awkward. So they are very entertaining, but not for the right reasons. Sachs just doesn’t quite have the right touch to mix horror and camp as say, Joe Dante did in Piranha and The Howling though, it would appear that’s what he was going for.

But either way, this production’s heart is in the right place and the really cool work by future Oscar winner Baker is very effective…and of course all the intentional and unintentional entertainment it provides, is worth watching it for. The filmmakers were really trying hard here to deliver a new and horrifying movie monster, but the talent (aside from Baker) is just not quite there behind or in front of the camera and the disagreement between director and producers doesn’t help either. The acting is just as bad as the before mentioned dialog and the inept cast stumbling around finding body parts both of the victims and the Melting Man, produce far more laughs then chills. Also, some of the conversations between gore scenes are hilariously inappropriate, given the situations the characters are in and it’s hard to tell how much of this was intentional and how much was not, but it’s entertaining either way, so, ultimately, it doesn’t really matter.

To a degree Sachs got the kind of campy fun movie he was trying to make, but it’s not totally on purpose. Made by the legendary American International Pictures, Melting Man has earned cult classic status and has become one of MST3K’s funnier episodes and if you are a connoisseur of ‘so bad it’s good’ cinema then this is a prime example. The added nostalgia of this late 70s flick only makes it even more fun. The kind of movie they sadly don’t make anymore and a personal guilty pleasure of mine. Thankfully Melting Man is now available on a gorgeous extra filled blu-ray from the folks at Scream Factory! Also features cameos by 70s B-Movie regular Cheryl ‘Rainbeaux’ Smith (Laserblast) and acclaimed director Jonathan Demme.