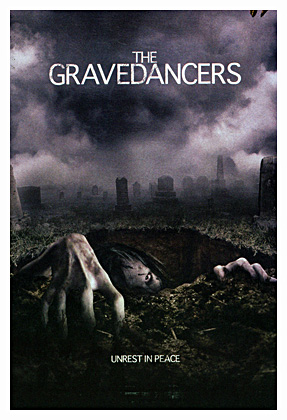 The Gravedancers is a 2006 horror that concerns three friends (Dominic Purcell, Josie Maran and Marcus Thomas) who reunite at another friend’s funeral. A night out for drinks after, leads to a subsequent drunken visit to the cemetery where they find a mysterious envelope which instructs them to dance on graves…and they do. Their graveyard hi-jinx result in a curse in which they will be haunted for a month by the occupants of the graves they danced on…then sent to their own graves unless the curse is broken.

Gravedancers, as directed by Mike Mendez (Big Ass Spider), has some nice atmosphere and truly spooky effects and sequences despite it’s silly plot. There is also a lot of silly stuff, too and it doesn’t help any of the tension the spookier stuff builds. Some of the dialog also sounds laughably bad despite the all-round good performances by a solid cast and silly becomes the magic word here as a somewhat decent horror flick drowns in the goofiness of it’s story and script by Brad Keene and Chris Skinner. The overblown CGI chase finale is also laughable, not fear inducing or suspenseful. Somehow though, the film still remains entertaining and as Mike Mendez usually incorporates some humor in his movies, he takes the silly parts of the screenplay and runs with them without turning the film into an outright comedy. The film may be a mixed bag, but it is never boring and keeps one amused till it’s goofball finale. The FX are well rendered and the film looks good with David A. Armstrong’s cinematography.

Overall, this film does entertain despite mixing some very spooky stuff with some very silly material. Director Mike Mendez has a flair for humor laced horror, so he takes the more ridiculous moments from the script and just goes all out and has a good time with them. It makes for a very uneven flick, but one that is never dull and even unintentional laughs are a form of amusement. Also stars genre favorite Clare Kramer (Buffy The Vampire Slayer’s Glory) as Purcell’s wife  and vet Tcheky Karyo trying to keep his dignity in the Van Helsing role of paranormal investigator Vincent Cochet.