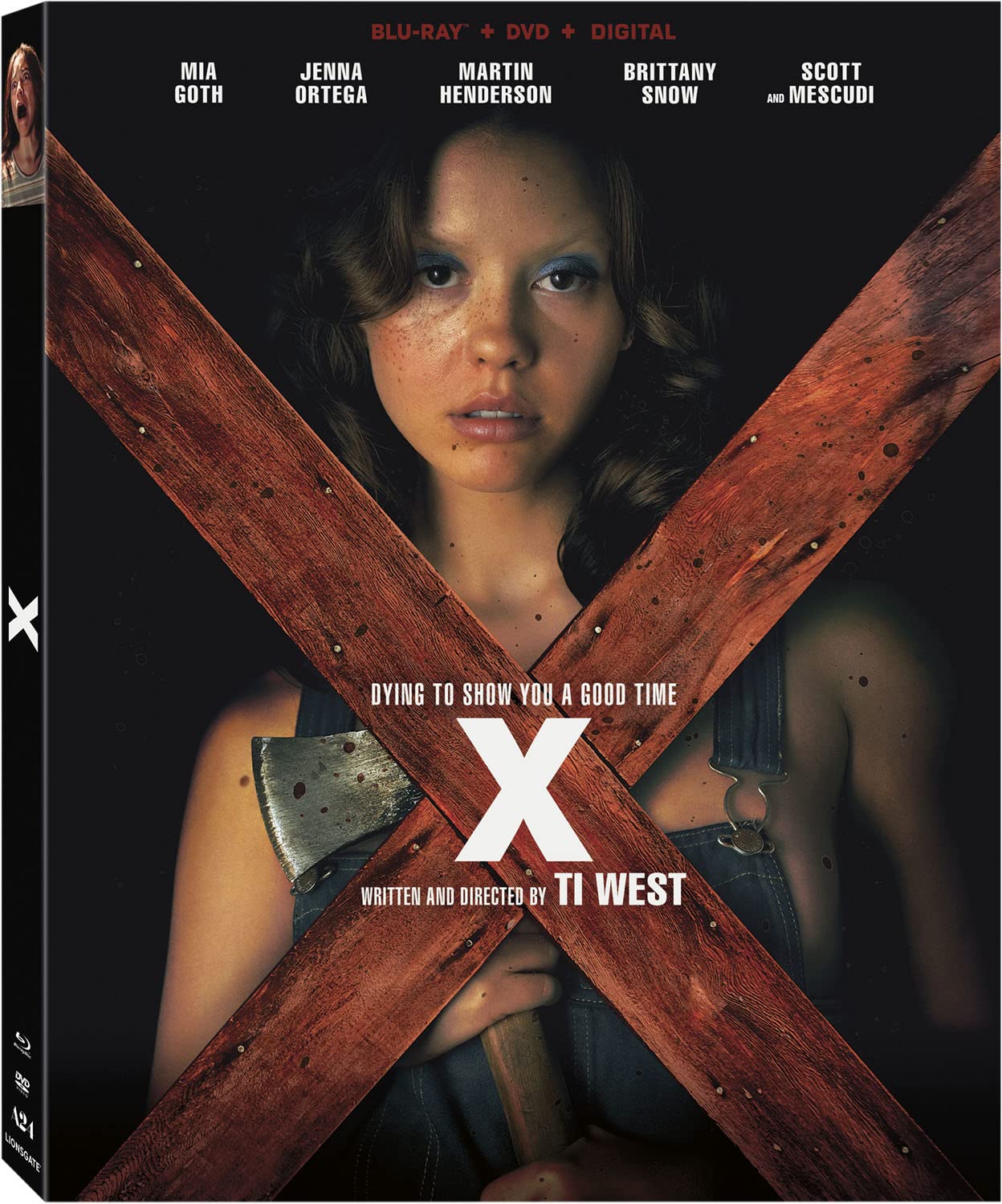 “In 1979, a group of young filmmakers set out to make an adult film in rural Texas, but when their reclusive, elderly hosts catch them in the act, the cast find themselves fighting for their lives.”

Here’s the link to the Amazon pre-order page: https://www.amazon.com/gp/product/B09VJDBF1V/ref=ox_sc_saved_image_1?smid=ATVPDKIKX0DER&psc=1 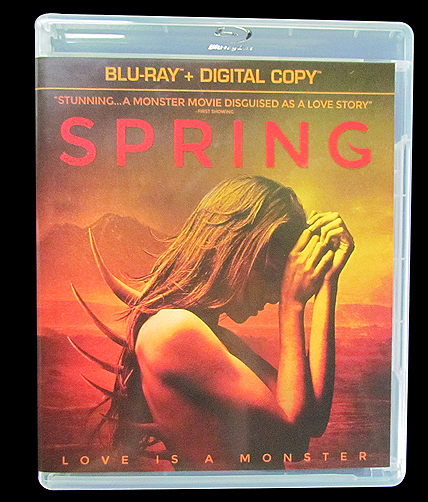 Spring is already poised to be on many 2015 best horror lists and is definitely going to be included on mine (see full review here). The Blu-Ray is here from Anchor Bay and, in my opinion, is worth having if you are a fan. On the technical side…the picture is in the 2:40:1 aspect ratio and the image is crisp and clear and preserves the subtle colors of co-director Aaron Moorhead’s cinematography. Even with a bit of a muted color scheme, the film still captures the beauty…and a bit of the romantic mystery…of the enchanting Italian locations. This works perfectly with the offbeat, dark fairy tale nature of the film and the more natural look is refreshing in an era of bright comic book colors. The sound is in Dolby TrueHD 5.1, which is perfectly suited to the film’s mostly subtle tone. This is not a big FX action film and it doesn’t need anything too extravagant.

There is audio commentary from directors Justin Benson and Aaron Moorhead and the two present a laid-back account of many aspects of the filmmaking process. There is an extensive ‘making of’ feature that is made up of numerous segments focusing on the script, casting, filming in Italy, the make-up and prosthetic effects from Todd Masters and crew, visual FX, scoring and pretty much every aspect of the film’s production. It’s made by the filmmakers themselves and uses a lot of on-set footage and interviews and is actually a lot of fun. It is lengthy at 70 minutes but, is never boring and avoids the stuffiness of more technically focused ‘making of’ features and if you like the filmmaking process, should find it informative and a bit charming, too. There are two deleted scenes that are actually extended versions of scenes in the film and they were really good exchanges between our leads and it was nice to see them shared. There is a breakdown of FrostFx’s main FX segment during Louise’s big reveal, including nature photos used a s a reference, to the concept drawings, to the actual CGI shot. We also get the filmmakers’ original proof of concept used to sell the movie idea, an alternate ending (which, I’m glad they didn’t use) and a few more minor tidbits that seem to be there just for fun. Overall a very generous selection of extras, most of which are very informative and entertaining on a very reasonably priced disc.

I really enjoyed this film and certainly, with it’s extras, find this disc a must-have. it’s a unique and original film presented on a disc that accentuates that uniqueness with an equally offbeat look at how the film was made from conceptualizing to FX. If you like something a little different movie-wise and enjoy in-depth looks at the filmmaking process, this a certainly a disc worth having in the collection.

As my last product review did quite well, I’ve decided to premiere my new column… Cool Stuff! Obviously it will be a look at/review of cool genre related items and home media. 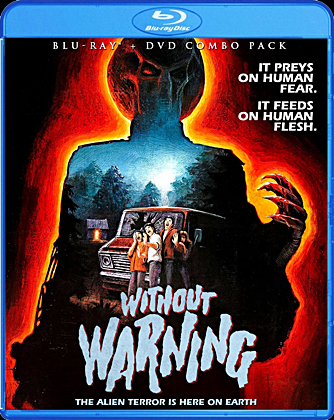 The folks at Scream Factory have done it again by bringing this hard to find cult classic to DVD and Blu-Ray for the first time ever. This 1980 low budget sci-fi flick (full review here) has been out of reach for decades and Scream Factory has resurrected it in all it’s cheesy fun, 80s glory. The combo DVD/Blu-Ray pack features a remastered print with a really nice package of extras. We get commentary from director Greydon Clark along with all new Scream Factory exclusive interviews with leads Christopher S. Nelson and Tara Nutter, producer Daniel Grodnick, legendary cinematographer Dean Cundey and make-up FX master Greg Cannom. They are all fun recollections about the making of a lost cult classic… and a personal guilty pleasure of mine. Scream Factory always gets some fun and informative interviews out of these people, treating us to an inside look at a film the likes of which would normally not get… but strongly deserves… such star treatment. A lot of enjoyable nostalgia here.

As for the print itself, the film looks as good as it probably ever will. There is some flickering and extra grain in some of the darker scenes. Probably due to flaws in the existing print revealed when those scenes were lightened but, as a film left in a closet somewhere since the 80s, this is probably the best source material available and considering it’s age and the low budget nature of it’s production, it still looks really good and the colors are rich and the image crisp. The sound is clean and very good quality and overall, despite any minor flaws in the source print, this looks far better then one might expect and the overall quality far outweighs those minor anomalies. Another great job by Scream Factory giving a cult classic the respect it deserves. Definitely recommended!

Oculus is my favorite horror, so far this year (full review here) and as a big fan of co-writer/director Mike Flanagan too, I eagerly awaited it’s home media release anticipating some cool extras and it didn’t disappoint. The disc comes with commentary from director Flanagan and a nice assortment of deleted scenes, including one with a cameo by Absentia‘s other leading lady Katie Parker (Courtney Bell’s cameo as a auctioneer remains in the final cut). There is a fascinating documentary about the making of the film including interviews with behind the camera talent and gives some cool incites on how the film came to be and how they pulled it off. To add to that, it also includes the full 32 minute short film version of Oculus that the feature film started out as. If you love the film making process as much as the movies, like myself, these are some extras that follow the genesis of how a film is created and brought to life. Very Cool!

As for the movie itself, the print is gorgeous. The disc preserves the rich but, varying color scheme of the film (brighter colors for sequences early on but, more muted and cold as the darker story elements unfold) and the picture is crystal clear. The sound is nice and full and while I don’t have a fancy sound system yet, it sounded great to me. All in all, a really nice presentation of what I believe is one of the best horror flicks of the year, if not in some time. It’s got some really solid extras and the movie itself was just as effective the second time around. Highly recommended.