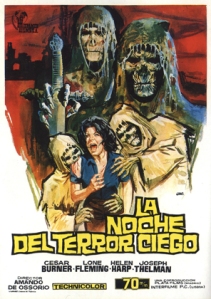 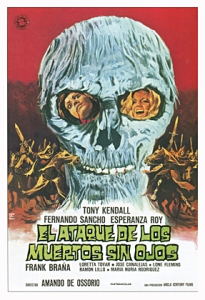 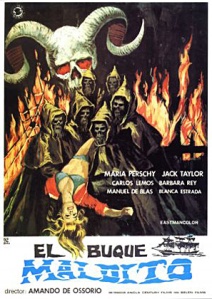 The Blind Dead series are four cult classic horror films written and directed by Spanish filmmaker Amando de Ossorio during the 70s. They tell four separate stand-alone tales about a sect of 14th century Templar knights who turned away from the church to Satanism and were excommunicated and executed for their rituals of human sacrifice and drinking of blood. They did, however, achieve a sort of immortality from their horrific ceremonies and now rise from their graves to continue their gruesome ways. They are blind…though the reasons vary per film…and hunt their prey by sound.

While a little too slow moving for me, personally, to truly embrace them as favorites, I do enjoy watching these spooky films. They are held in high regard, due to their thick atmosphere and creepy visuals…deservedly so…and are even believed, by many, to have been a strong influence on John Carpenter’s The Fog… but, more on that later…

wn in it’s native land as La noche del terror ciego, the first of this series centers around an abandoned monastery that holds the tombs of the Templar Knights executed for their practice of dark rituals. It is avoided by all of the locals and the subject of fearful folklore. A set of circumstances leads a woman to stay the night on the grounds and she falls victim to the bloodthirsty walking corpses who rise from their tombs. When her husband and friend form a search party to go looking for her, what they find is a nightmare they may not escape. The film is extremely atmospheric and Ossorio certainly knows how to make a horror film look spooky. The FX and gore may be a bit cheesy by today’s standards, but are still effective and the film can be quite unsettling with it’s walking skeletons that mercilessly stalk and gruesomely slay our characters in the abandoned monastery setting. A very creepy film. Stars Lone Fleming, César Burner and María Elena Arpón.

taque de los Muertos Sin Ojos is the second and arguably the best of the series. It takes place in the Portuguese city of Bouzano where there is a grand celebration going on to commemorate the 500th anniversary of the defeat and burning alive of a sect of Templar Knights that terrorized the village with black magic and human sacrifice. The Knights vowed revenge and when an angry local summons them from their tombs, the celebration becomes a slaughter and a remote church may be the survivors’ last hope. This flick is also very atmospheric, has some generous blood-letting and once again has a spooky visual style that can chill the bones. Ossorio gives his silent Templar Knights a lot of menace and their are some vivid flashbacks to give their vengeful characters weight. A strong entry in the series, if not the pinnacle. Stars Tony Kendall, Fernando Sancho and Esperanza Roy.

Buque maldito is the third and possibly the weakest of the four films, but is still very creepy and atmospheric at times. This story tells of a pair of pretty models adrift at sea for an outrageous…and dangerous…P.R. campaign for the new boat they are on. They encounter a fog bank and within an ancient Spanish Galleon that looks centuries old. When they board it, they find it filled with the walking corpses of the Templar Knights who proceed to gruesomely slay them. When a search party comes looking for them, they may be heading toward a horrifying fate aboard the ghostly ship. This entry might be the silliest story-wise, though, it has some of the best visuals with it’s ghost ship setting filled with the blind dead. It is slower moving than the usual moderate pace of these flicks and is sometimes hard to believe when a character is in peril and no one hears their screams, despite being not far away. On the plus side, the setting is very claustrophobic and the production design very effective. The lesser of the four, but not by much as the Templars are still effectively spooky! Stars Maria Perschy, Jack Taylor and Barbara Rey.

he de las gaviotas is the fourth and final film and is a bit stronger than Galleon. Returning to a land-based setting, this entry takes place in a secluded coastal village where a young city doctor and his wife have come to set up a practice as the local doctor retires. They are not well-received and soon they find they have walked into a setting from a bad dream. A nearby monastery houses the walking corpses of an evil sect of Templar Knights who, every seven years for seven days, descend upon the village where they are appeased by being offered seven village maidens as a sacrifice. When the doctor intercedes to save one girl, there is hell to pay…literally. Once again the film is atmospheric and has some disturbing scenes, especially in it’s flashbacks to the Templar’s heinous sacrificial ceremonies. The Knights remain creepy and effective and there is the expected amounts of gore to go with the chills. Ossorio quit while he was ahead and this entry does serve as a fitting climax to the series. Stars Victor Petit, Maria Kosti and Sandra Mosarosky.

And what about the alleged influence on John Carpenter’s classic The Fog?…

While I have never read Carpenter acknowledge any influences from Ossorio’s series…he has sighted the 1958 film The Crawling Eye and some real-life events as inspiration…some of the similarities are fascinatingly close. In the first film, there is a scene of a victim rising off of a slab in a morgue and sneaking up behind the mortician that evokes the similar scene of the corpse rising off the slab in Dr. Phibes’ office, to startle Jamie Lee Curtis in Carpenter’s film. Return of the Blind Dead features a last act where the Templars have the survivors trapped in a remote church which is exactly where the survivors find themselves in The Fog‘s intense ending. The Ghost Galleon may be the weakest film, but it bares the strongest resemblance to Carpenter’s ghost story with a haunted ship filled with walking corpses that is shrouded in a mysterious perpetual fog bank…much like Blake and his vengeful crew of lepers. Finally, Seagulls is set in a remote coastal village much like the atmospheric fishing village of Antonio Bay, that is setting of The Fog. If these are all mere coincidences, they are ones as spooky as the films they involve! It’s hard to believe this series wasn’t an influence on one of Carpenter’s spookiest classics, but the director himself has listed other inspirations…that do make sense, too. The Crawling Eye involved it’s creatures shrouded in a mysterious fog, as well and some of the historical events fit perfectly as the basis of Carpenter’s work. Who knows? Either way, as horror fans, we win!…as all five films are horror classics in their own right!

John Carpenter’s Captain Blake and crew?…we may never know for sure…