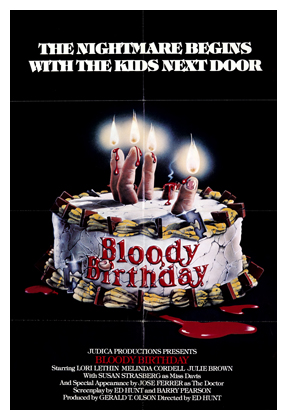 1981 slasher may not be a good movie in the traditional sense of the word, but is a fun little flick about a pack of diabolical and homicidal ten year-olds. Flick opens in 1970 where three children are born at the exact same time during a solar eclipse. We jump to 1980 where their birthday draws near and the three have started on a murder spree in their small town. Curtis (Billy Jayne), Debbie (Elizabeth Hoy) and Steven (Andy Freeman) will kill anyone who stands in their way or just for kicks, including Debbie’s sheriff father (Bert Kramer) and her hot sister (Julie Brown). It’s up to classmate Timmy (K.C. Martel) and his older sister Joyce (Lori Lethin) to stop them…if anyone will believe them!

Co-written, with Barry Pearson and directed by Ed Hunt, this is a fun 80s slasher flick. It’s not an overly well made movie, it’s quite cheesy in terms of dialog and acting, but there is some fun from watching the over-the-top trio of murderous tykes. These kids are quite bloodthirsty and quite happy with themselves for their bloody acts. That’s what takes this horror delightfully into camp territory, the absolute glee these three kids show in planning and executing their kills. Just the sight of a ten year old packing a revolver with a deranged smile on his face is worth watching it for. That and how easily these ten year-olds continue to outwit adults and police, even in the killing of the town sheriff and one of their stricter teachers. It’s a lot of fun to watch them take out innocents and members of their own families, not to mention trying to finish off Timmy and Joyce, who are the only ones to figure things out. On a filmmaking level, there is little or no suspense, the dialog is laughable at times and the bloodshed is fairly minimal, but watching this pre-teen Murder Inc. is just a lot of cheesy 80s fun.

The cast make this fun too, especially the kids. As our three homicidal maniacs, Jayne, Hoy and Freeman all perform with over-the-top glee as they plot and carry out heinous acts for their own pleasure, or to hide their evil doings. Jayne and Hoy give their characters a true diabolical malice, though Freeman’s Steven comes off more as a lackey to the other two tykes. Lori Lethin makes a solid and pretty heroine as big sister to Timmy, who has been targeted by the sinister trio. Martel is good as Timmy who is just trying to make someone believe his classmates are literally out to get him. In support, we have a pre-MTV Julie Brown (the white one) showing lots of welcome skin as Debbie’s older sister Beverly and soon to be Cannon Films action icon Michael Dudikoff as Beverly’s boyfriend Willard. Veteran actors José Ferrer and Susan Strasberg have small roles as the kids’ doctor and ill-fated teacher respectively.

In a film making sense it’s not a very good movie, but as entertainment, this one is a lot of fun. We get three really evil bad seeds who gleefully kill with little provocation and do so often. We have an innocent kid caught in their crossfire with only his big sister to believe him, while adults and police remain oblivious. The gore and bloodshed are moderate, but there is some abundant nudity from a young Julie Brown before she became an MTV darling with her music videos and Just Say Julie show. It’s also very 80s and simply very entertaining all the more for taking it’s ridiculous story seriously.

3 weapons of choice for a homicidal ten year-old.

This is a routine and rather dull slasher flick from legendary Cannon Pictures schlockmeisters Golan and Globus. The film is written by Marc Behm and directed by Boaz Davidson, whose only noteworthy directorial effort is the cult 80s teen flick, The Last American Virgin.

Flick opens with young Harold (Billy Jayne) leaving a Valentine’s Day card for little Susan Jeremy (Elizabeth Hoy) and then watching through her window as she opens it. When it is greeted with distain and laughter, young Harold murders her friend David (Michael Romano) in revenge. Nineteen years later, Susan is a grown woman (now Playboy Playmate Barbi Benton) who is entering a hospital to get some test results. Guess who works there though and soon Harold in a surgical mask is switching her test results to get her admitted to the hospital for more tests. As Susan tries to convince the doctors there has been a mistake, Harold leaves a trail of bodies as he makes his way to Susan to get his revenge on his lifelong Valentine.

Hard to tell just how seriously director Boaz Davidson was taking this flick, as he really overdoes it with the horror movie tropes and it is almost comedic that every person…save Benson’s heroine…acts like a creep and the hospital seems to be filled with more mental patients than medical patients. The staff alone make this possibly the creepiest hospital on the planet and that’s not even considering the loonies apparently allowed to freely roam the halls. Even Arlon Ober’s score overdoes it and seems more appropriate in an Omen spoof than a legit slasher. Despite that, it’s still a dull affair, even with the overdone atmosphere and generous but routine bloodshed. Harold seems to wander the halls randomly slaughtering folks and one has to wonder how no one in a fully staffed hospital notices anyone missing or sees Harold transporting dead bodies to the empty 9th floor. It also seems weird that despite being left alone constantly, it takes the deranged killer well over an hour to get to finally pursuing Susan. Benton makes a fiery heroine and really gives it her all, but the cast of unknowns around her act fairly woodenly and our killer doesn’t exude too much menace either, despite the decent body count. When his identity is revealed, we’re not all that surprised as the film tried way too hard to make him the least obvious suspect. There is little suspense or tension and it’s only steady bloodletting and some nudity from our Playboy Playmate that holds our interest…and even her nude scene comes from a very date-rapey examination sequence by one of the hospital’s spooky staff.

I love this era of slasher/horrors and so had to give this one a look. There isn’t much to recommend other than Barbi Benton making for a good heroine, running around in her skimpy hospital gown and flashing the attributes that made her fairly famous in the late 70s and early 80s, especially on TV and in the cult classic Deathstalker. Despite a little 80s nostalgia, this is a forgettable slasher and one of the lesser efforts in the 80s slasher era.